14 Nov 2013"Elise Salt wins by the narrowest of margins, Dan Hoy is one of our youngest ever champs" 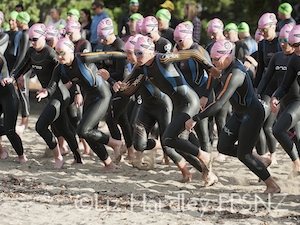 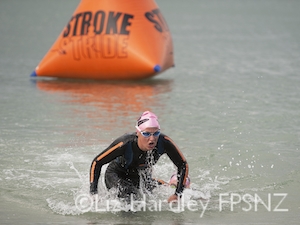 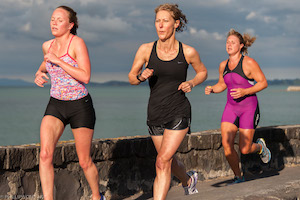 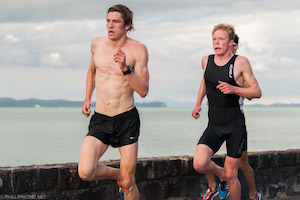 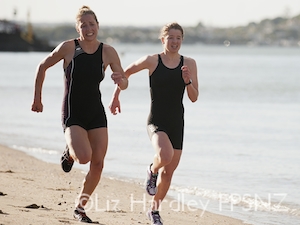 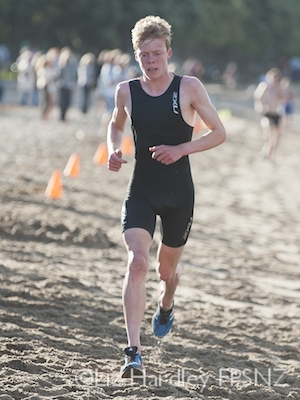 The first Stroke & Stride of the silver anniversary season turned out to be golden for a couple of the most talented young athletes in the sport.  The lustre didn’t stop there as Auckland turned on a pristine afternoon that gifted all the competitors some of the fastest racing conditions we have witnessed over the past twenty-four seasons.

The light onshore wind from the north that had tickled the shore for most of the day kindly and perversely rotated around the compass to a southerly direction as the 6.15pm start time loomed.  This resulted in the 500 metre swim course being wiped clean of even the smallest of waves leaving the sparkling waters of the Waitemata Harbour about as fast as it could possibly be.

The stacked women’s field were the first to attack the tight little rectangle and this distance is never going to be enough to allow any superior swimmers a chance to break clear of their pursuers.  And so it proved as within 6 minutes a pair of swimmers were shoulder to shoulder as they rapidly closed on the swim exit.  Penny Hayes and Natasha Bowyer were the fastest swimmers on this day recording a smoking six and a quarter minutes but giving them just a handful of seconds lead over Elise Salt, Nicole van der Kaay and Samantha Warriner.

The men’s field were soon doing their own quick thrash around the cans and while Brent Foster held his accustomed position at the head of the field even the mighty Fozzie hadn’t managed to break clear and he had plenty of company chasing him down all the way into the shore.  Brent Foster clocked 5 minutes 49 seconds for the half kilometre, good enough for five seconds lead over Jay Walkwork and Sam Franklin who also went under 6 minutes.  Cooper Rand, Liam Ward, Dan Hoy, Michael Perree and Nick Berry were all handily placed as they ran up the beach and quickly through transition primed to attack that run course.

While the petite swim was a tasty and most enjoyable entree, the 5 kilometre run was most definitely the main course for this meal and where the victors would emerge.  Like the swim the conditions were hard to beat with just a refreshing breeze and a setting sun to contend with on the outward leg that wound its way around the coast to the turn at Okahu Bay.  You would think a whole 5000 metres would be enough to sort out the placings but that wasn’t to be.  As the leading female runners came back into view a pair of athletes were running shoulder to shoulder and nothing at all was separating them.  Neither Amelia Watkinson nor Elise Salt were showing any signs of giving in as they ran down onto the beach and took aim at the finish line.  In the end, the very very end, it took them all of 4999.5 metres to do it; it was Elise Salt that got herself across the line in first place by the smallest of margins.  Perhaps it was experience giving Elise her third ever victory at the Stroke & Stride.  However Amelia Watkinson did absolutely everything but win this race and was so so close to recording a second win to go with first ever first place at the end of last summer.  The final podium position was claimed by hard charging Samantha Warriner managing to overtake our early swim leaders Penny Hayes and Natasha Bowyer during the run.

A year ago Dan Hoy was nipping at the heels of the older, more experienced swimrun athletes that were filling the podium through the season.  But a whole lot can happen in six months, most especially when you are young enough to be celebrating just your fifteenth birthday.  Dan Hoy returned to the Stroke & Stride with a winter of training under his belt: fitter, stronger and plain out faster than he was last summer.  This summer at Race #1 he was handily placed during the swim before he threw the gauntlet down out on that run course and after a brief tussle skipped away from his competition to run home for his first ever Stroke & Stride victory and even his log his time on the podium.  Closest challenger today was Cooper Rand also recording his best ever result with a fine second placing.  That valuable third place went to Jay Wallwork keeping him ahead of all that maturity and decades of experience that Brent Foster and Liam Scopes bring to the Stroke & Stride table.

Going to be a heck of a season if the excitement of Race #1 is any precursor.  When the first half dozen men cross the line within 60 seconds of each other.  When we need a ruler to measure the gap between the the top two women after 25 minutes of racing.  Then we get the feeling that the next four months of summer and seven events are going to be an awesome display of competition.

The heart-stopping action is set to resume at the next event is on Thursday, November 28th.