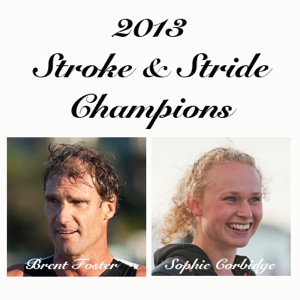 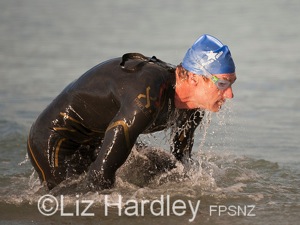 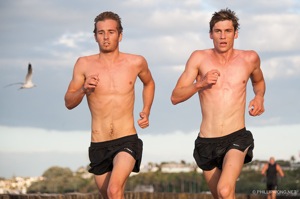 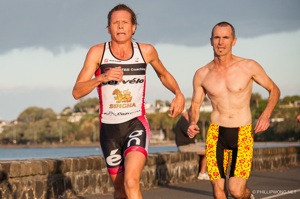 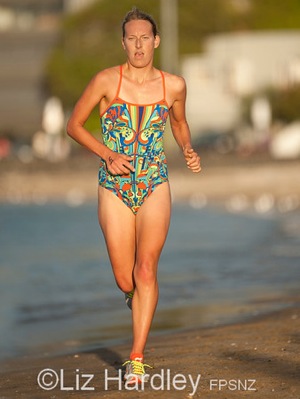 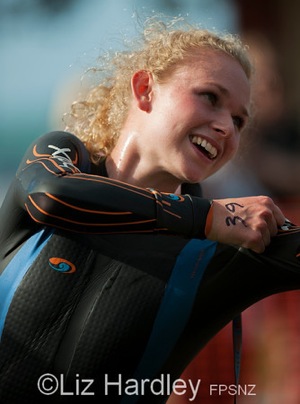 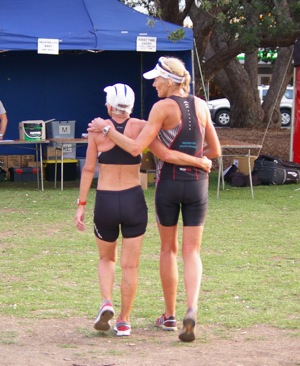 Stroke & Stride competitors have been thoroughly spoiled this summer with sublime conditions for racing at event after event from the start of the season back in November until now at the end of March.  This is especially so when you consider that twelve months ago our deciding event for the season was held while Auckland was being drowned in a torrential downpour.  In 2012 our transition area resembled a swimming pool with as much water out on the run course as we’d expect in the sea.  This year it is the Waitemata Harbour doing its own impression of the world’s biggest swimming pool with hardly a ripple in sight and perfect conditions for fast racing.

The 1000 metre swim circumnavigated a large triangle course and the only possible hindrance was that the second of the swim legs was heading to the west and into the setting sun.  The men’s field were first to start and while the conditions were super fast that doesn’t help spread the field out so there weren’t any substantial breaks from the main field.  The leading swimmer rounded the final buoy and reached the beach just inside 12 minutes.  That was Brent Foster clocking a flying 11 minutes 58 seconds for the kilometre and good enough for a 12 second lead over Cameron Todd.  Ten seconds later it was Stefan Talbot hitting the beach with Sam Franklin on his shoulder and Jay Wallwork and Cooper Rand also close.

The women’s field were chasing the men around the buoys and by the time the fastest were nearing the shore they were already passing some of the guys.  Out in front and leading them in was a trio made up of Rebecca Clarke, Sophie Corbidge and  Simone Ackermann and they stopped the clock at 13 minutes and 5 seconds.  Trailing by 20 seconds in fourth and fifth came Elise Salt and Samantha Warriner and then it was a further half minute before we saw any more of the female swimmers.

Race #8 in the Stroke & Stride is not just the decisive final race to decide our Series Champions but it also doubles as the 2013 New Zealand Swimrun Championships with the added kudos that those venerable titles carry.  Our defending national champs Simone Ackermann and Cameron Todd were both to the fore at halfway with strong swims.  Simone and Cameron may be young in years but they have plenty of experience with Simone having won this title three times and Cameron twice.   Talking experience we therefore must also mention our four time New Zealand Swimrun Champion Samantha Warriner and Brent Foster with an even ten titles to his name.

The 4 kilometre run to decide this year’s champs was an out and back jaunt to the turn cone at St Heliers Bay before a finish back on the sands of Mission Bay.  Like the swim, conditions for the run were just fast.  Ok, there may have been some sun in the eyes for parts of the return journey.  By the time the first men rounded the point and came into view two runners had already started sprinting with a third close behind.  When they reached the final turn onto the beach and we could make out exactly who these leaders were it was apparent that it was Cameron Todd at the front and he had now broken clear of the pursuers.  Cameron held that small lead to the line and took his third title in a row.  Having a tremendous race recording not just his best ever result in the National champs but also his best ever Stroke & Stride result was Cooper Rand taking second place.  Just seconds later Brent Foster finished claiming the final podium position.  Next it was Jay Wallwork coming home in fourth place ahead of Sam Franklin.

Not too far behind this action it was the fastest of the women’s field closing on the finish and one athlete hadn’t waited for any sprint finish to decide this title.  Out on the course Samantha Warriner had caught the couple of runners ahead of her and ran straight past them to come home and comfortably take another title and her first Stroke & Stride victory since 2009 – it is called getting better with age.  Simone Ackermann made a valiant attempt to defend her title but had to settle for second this year.  Rebecca Clarke claimed the valuable third place ahead of Elise Salt and Alana Lythe.

These results would be crucial in deciding the Stroke & Stride champions for the season as athletes are awarded points in the Series Grand Prix.  That is crucial for all except Sophie Corbidge.  Sophie had been so dominant in the Stroke and Stride this summer with five crunching wins from five starts that the competition was simply left in her wake.  Sophie Corbidge made it look easy as she claimed the title of Stroke & Stride Series Champion for the first time.  Doing their best to make a race of it was Elise Salt (4th, 5th, 9th, 4th, 1st & 4th) and Samantha Warriner (5th, 2nd, 7th, 3rd & 1st) with a win a piece this season and they deservedly filled the podium while Amelia Watkinson ( 6th, 10th, 5th, 7th, 1st & 6th) took home the remaining first place on offer and finished in 4th overall in the series ahead of Rebecca Clarke and Alana Lythe equal in 5th place.

The men’s Grand Prix was considerably tighter with it coming down to the final placings in the final race to decide just who would be Stroke & Stride Champion in 2013.  Brent Foster won his first Stroke & Stride Series Championship in 1993, that was 20 years ago and over the decades he has had his name engraved on the cup a jaw-dropping fifteen times.  His 3rd place in the final event is enough to award him the championship one more time.  This title may be his sweetest and toughest to date as he did it without recording a win all season (3rd, 2nd, 2nd, 2nd, 2nd & 3rd) with a display of class and consistency.  Sam Franklin (6th, 4th, 2nd, 2nd, 1st & 5th) applied the pressure and is rewarded with second place in this quality field.   Now a very hard athlete to beat, Sam Ward  (1st, 3rd, 1st & 1st) captured 3rd place a solitary point ahead of up and coming Cooper Rand (7th, 8th, 6th, 3rd, 3rd & 2nd) with Liam Scopes (9th, 9th, 7th, 5th, 4th & 6th) keeping them all honest and scoring fifth place.

So at the end of the summer that delivered the best weather that many can remember we were delivered two Stroke & Stride champions in what couldn’t be more contrasting styles.  Now we just have to wait until November when all the action resumes at the 25th Stroke & Stride Series.