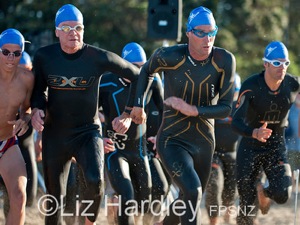 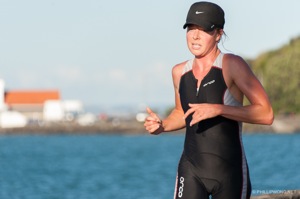 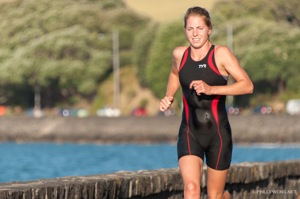 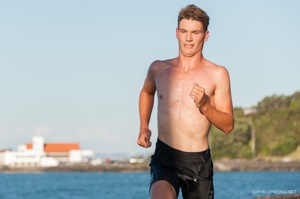 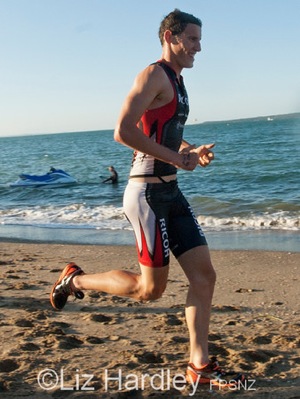 Race #7 in the series is contested over a 750 metre swim and 5 kilometre run and is the penultimate event in the Stroke & Stride.  With four months now elapsed since the start of the racing a number of athletes have done their dash in the early rounds and are struggling to keep their form and results coming in this business end of the season.  What hasn’t shown any sign of slowing down is the Auckland summer; our run of splendid weather is extended for another fortnight even though officially we are now sliding into autumn.  So for one more race competitors have blue skies, brilliant sunshine and the sparkling waters of the Waitemata to enjoy.

It was the turn of the women’s field to start first and they faced a slightly uphill stint for the first leg of the swim with an onshore wind and outgoing tide combining to create a loose chop as they headed for that first can 350 metres distant.  The second leg measured only 50 metres so they were soon around that and enjoying the ride back into the beach.  One swimmer had made the most of the conditions and opened up a sizeable advantage as she approached the shore.  Standing up in a time of 11 minutes and 16 seconds it was Clair Macky having a blinder and she ran into the transition area without another swimmer in sight.  Forty seconds later it was the remarkable Shelley King in second also on her lonesome with then Julia Cree clocking 12 minutes 18 seconds and Amelia Watkinson in 12 minutes 27 seconds before the swim exit traffic got a lot more congested.

All the men were in the second wave and they were soon chasing that first wave out and around the buoys and back into the beach.  These conditions were made to order for Brent Foster and he edged away from his pursuers on the outward leg and kept on extending his lead all the way back to shore catching every little wave going.  Brent just went inside 9 minutes for his swim that was good enough for a 34 second lead over Mark Bowstead and a 38 second lead on Sam Franklin.  More experience soon followed with Dean Foster clocking 10 minutes 2 seconds, Davin Bray 10 min 17 seconds, Daniel Hoy 10 minutes 24 seconds and Liam Scopes 10 minutes 40 seconds.  These individuals had some room to stretch out their strokes unlike the very large bunch that all arrived in unison back on the beach 11 minutes after the start.

The 5 kilometre run course was a repeat of the previous race taking competitors out as far as Okahu Bay before the return to Mission Bay.  Tamaki Drive follows the twists and turns of the shoreline ensuring any wind is never coming from the same angle for any long period.  On the whole it could be described as providing some assistance on the initial outward leg while on the way home it at was at times on the nose and doing its best to hinder.

Women’s swim leader Claire Macky was in front for a good portion of this run before the superior leg speed of Amelia Watkinson allowed her to gain the upper hand.  By the time they had rounded the final bend and lined up for the finish along the beach at Mission Bay Amelia Watkinson had gone clear and ran through for a magnificent first ever victory at the Stroke & Stride.  Claire Macky may have been denied the win however her sensational second placing on the day was her best ever result also.  The final podium position goes to Rachel Penney who used all those 5 kilometres to run herself into her own best ever finish and staying clear of fast finishing Nikki Hill and Julia Cree.

As the spread out field of leading men set off to conquer their run their was speculation amongst the crowd on the beach if Brent Foster’s half minute lead would be enough to allow him to claim yet another triumph at the Stroke & Stride.  As it turns out Brent ran very well to defend his swim lead and only one of his chasers managed to erode that advantage he carried from the swim out on to the road.  Two years ago Sam Franklin broke through and won his first Stroke & Stride and at this race he gets the swim and run combination perfect again and repeats that win in fine style.  Brent Foster scores second place while Mark Bowstead repeats his third place finish from the December event.    Young Daniel Hoy and not quite so young Liam Scopes had each other in sight the whole race and perhaps experience does count for it was Liam Scopes just seconds ahead as they closed on the line with Liam taking fourth place and Daniel Hoy securing fifth.

Doing the business at this race sees a shake up with the Grand Prix points allocation on the men’s side of the ledger.  Legendary Brent Foster has elbowed his way into an outright lead with a slender but very useful 6 point lead over dangerously poised Sam Franklin who in turn has Sam Ward breathing down his neck another 2 points further back.  Cooper Rand is the only other athlete close enough to encroach on the podium however he may be kept busy keeping Daniel Hoy in his rear view mirror.

Not much to read about over with the women as since half way though the season Sophie Corbidge has had one hand firmly clasped around the Stroke & Stride cup.  Amelia Watkinson and Claire Macky’s fine races today elevates them to now being contenders for the overall podium but they’ll still need to mix it up with Elise Salt and Samantha Warriner at the finale.