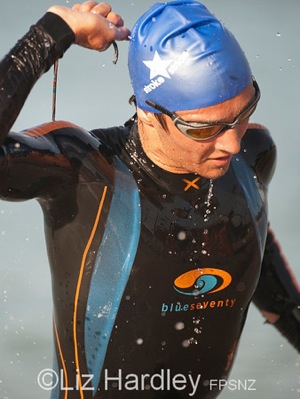 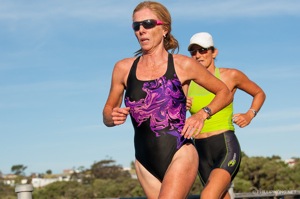 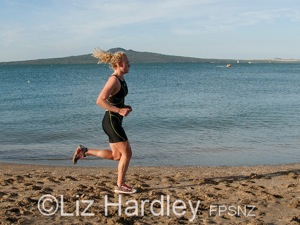 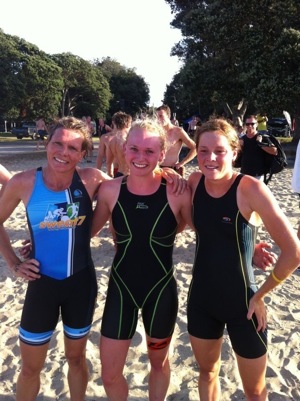 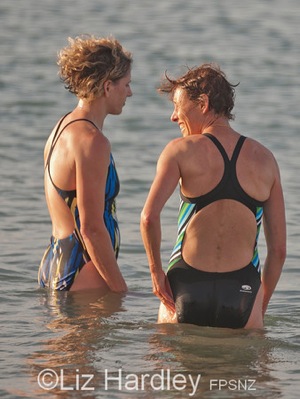 Auckland has treated the Stroke & Stride to a remarkable run of splendid weather this summer.  Yet as we stood on the beach in the afternoon sun counting down to the start of Race #6 in the series this was being hailed as the best day so far.  What we had to enjoy was a balmy hot summer’s day bathed in bright sunshine and a light offshore breeze to keep the water desirably smooth.

With such perfect conditions it almost seemed a shame that there was only a 500 metre course to be swum and with the men first away it was less than 6 minutes later that the leaders were closing on the beach and ready to step back on the sand.  Therefore no swimmer had any opportunity to break away from the field and a quartet of swimmers lead them in.  When they stood up it was of course Brent Foster at the head of this fabulous four clocking 5 minutes 46 seconds with Cameron Todd glued to his hip and followed closely by Cooper Rand and Sam Franklin.  Next in came Dae Ho Kim and Song Hyeon Lee, this dynamic duo representing Korea and recording 6 minutes and 5 seconds.  Another small gap and then it was Dean Foster and Davin Bray clocking just over six and a half minutes and that opened the floodgates as it looked to be the entire men’s field running past and into transition from then on.

The women’s field saw all this unfold as they waited their start ten minutes later.  The fastest female swimmer recorded 6 minutes and 25 seconds and like the guys had company all the way out, round the cans, and back into the shore.  Rebecca Clarke won the swim but it was only a small blanket needed to cover Sophie Corbidge, Maddie Dillon, Anneke Jenkins, Simone Ackermann, Samantha Warriner and Ha Yeon Lee as they ran up the beach and on to the transition zone.  Following them it was only a 15 second wait until Alana Lythe and Danielle Parkinson followed through with then a full half minute before then next swimmer stood up and pretty much everyone started arriving.

Once into their shoes our super swimmers morph into road racers as they tackle the out and back 5 kilometre run course taking them west towards the sunset and the Auckland City skyline and a turn cone at Okahu Bay.  Pretty much perfect conditions for fast run times as well, any breeze would have only assisted athletes on their return towards Mission Bay.

One of the most illustrious swimrun athletes New Zealand has produced is Taupo’s Cameron Todd.  Not only has he won nine Stroke & Stride events but also at the end of last summer he mounted a successful defence of his national Swimrun Championship title.  Therefore when Cameron Todd is racing we are paying attention and when Cameron Todd runs away from his competition and wins his 10th ever Stroke & Stride event we are not surprised.  This decade of victories is more than just a number as it lifts him into second overall on the all time list of winners.  Sam Franklin goes close to scoring his second ever win but is forced to accept second place instead for the second fortnight running.  Likewise Cooper Rand repeats his podium position from the previous race holding out Daniel Hoy scoring his best ever finish and Liam Scopes with his best result this season.

This summer has belonged to Sophie Corbidge and this race was to prove no different.  After swimming as fast as the best in the business she is in a class all of her own out on the run course and uses those 5 kilometres to extend her lead and come home a comfortable winner for the fifth time this season.  Four time Series Champion Simone Ackermann couldn’t match Sophie’s speed on this occasion but heralds a great return to the series finishing second head of another multiple series champ in Samantha Warriner.  It may be Anneke Jenkins first season but she can hang in there with the best of them coming home in fourth place just ahead of Maddie Dillon.

The Series Grand Prix decides the Stroke & Stride Champion for the season and by the three-quarters point it starts to get interesting unless of course one athlete kicks butt every time she races like Sophie Corbidge has a predilection for doing.  So with two more races to come Sophie has done everything but win the title already and only Elise Salt has a chance, small that that might be, to overtake her.

Whereas on the men’s side it could not be closer; Brent Foster and Sam Ward share the top rung equal on 75 points at this stage of proceedings.  If Brent goes onto to take the title in the 24th season of Stroke & Stride it will be his for an incredible 16th time.  Should Sam take his first Stroke & Stride title it will be just as incredible for the fact he has improved so much over the years that he can now finish ahead of the legend.