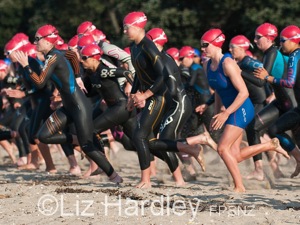 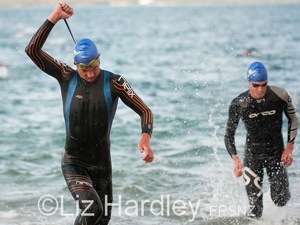 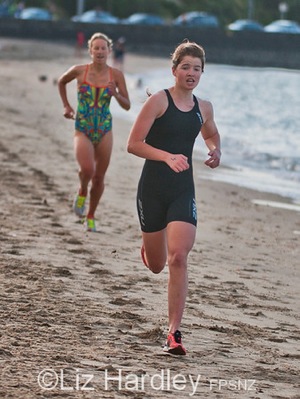 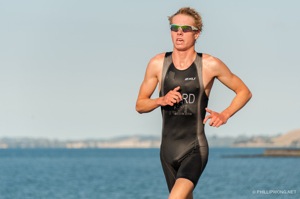 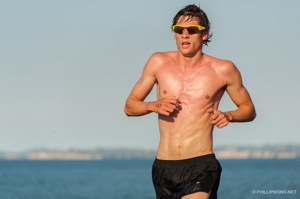 When athletes arrive at the fifth event in the Stroke & Stride they have moved into the business end of the Series where scoring a good result and valuable points is now at a premium.  Certainly the weather is playing its part this summer as Auckland turns on another idyllic day for racing.  By that we mean plenty of sunshine and just the lightest balmy onshore breeze to get the Waitemata Harbour between Mission Bay and Rangitoto Island at its sparkling best.

As the women’s field lined up on the sand staring out at the distant swim buoys they faced a 750 metre swim with all conditions pointing towards fast times.  And so it proved as the field quickly navigated their way round the two turn buoys and charged back towards land.  At this stage three swimmers had broken clear of the bulk of the field and when they hit the sand it was Rebecca Clarke clocking 9 minutes 25 seconds with Penny Hayes locked on her feet and then Elise Salt still in touch and just 5 seconds down.  The next group of swimmers had Molly Swanson towing them in and recording 10 minutes 18 seconds.  This loose pack held a number of contenders including Danielle Parkinson, Emily Pearce, Alana Lythe and Amelia Watkinson.  Sarah Cushing was chasing hard and clocked 10 minutes 49s seconds with Ashleigh Williams also in the hunt and also inside 11 minutes.

The men’s field had the advantage of watching most of this unfold and some took the opportunity to shuffle their position on the start line to optimise their angle of attack on the first swim buoy.  Again it was fast and furious as the men went forth and conquered the swim.  The first couple of swimmers at the end of the swim were revealed as Sam Ward and Sam Franklin as they exited the water and ran up the beach in a time of 9 minutes and 2 seconds with Euan Acket and Cooper Rand not far behind.  Michael Perree was looking at a 30 second deficit at this stage while the rest of the field were starting a full minute back and counting.

A quick change in the transition area for all concerned and then next up was tackling the 4 kilometre run course.  This out and back course hugged the coastline and took the runners past Bastion Point and Orakei Wharf as far as Okahu Bay before setting them up for the fast return to the finish at Mission Bay.  The trio of leading females stayed together until they were on their way back when Elise Salt applied the pressure with first Penny Hayes and then Rebecca Clarke dropping a stride behind.  Over the bridge and beside the beach it was still close, however Elise Salt wasn’t going to be denied her second ever Stroke & Stride victory as she held her form and took the win.  A slow start to the season is now well behind Rebecca Clarke as she takes the runner up position today going one place better than a fortnight earlier forcing Penny Hayes back to third for this race.  A tremendous fastest run of the day elevates Ashleigh Williams all the way up into fourth position, her best ever Stroke & Stride result and getting her ahead of Amelia Watkinson.

Our men’s field faced exactly the same run course but that was the only similarity as the closest the other men were ever going to get to Sam Ward was in the water as once his shoes hit the pavement it was sayonara guys.  At eighteen years of age Sam Ward may be young in years however he has been racing at the Stroke & Stride for a good chunk of those years and is now very experienced, very talented and very quick at the swimrun game.  This season it has all come together for him when he started the summer with his first win, matched that with winning the first event of the new year and now claims a fabulous three-peat with his biggest winning margin to date.  Sam Franklin is another athlete getting better with every outing and gets himself all the way up into second holding out Cooper Rand with Michael Perree and fourteen year old Daniel Hoy rounding out the top five.  Michael and Daniel both recorded their best ever Stroke & Stride results and while Daniel is undoubtedly scarily fast for one so young he is not the only one.  Of our top ten men across the line, only two are out of their teens and one of those old fellas is 21 year old Sam Franklin.

Over in the Series Grand Prix it is Sam Ward with his three wins in the bank receiving top billing and a sizeable 9 point lead over Brent Foster now forced into an unusual role of playing catch up.  A little further back and still capable of challenging for the Series Championship are Cooper Rand, Sam Franklin, Ryan Sissons and Daniel Hoy.  Sophie Corbidge gave the other girls a sniff of what winning could be like at this race but she is still leading by a large margin after her four victories and must be favoured to take the title.  If Sophie should get the speed wobbles or falter then it is Elise Salt and Nicole van der Kaay closest and set to pounce.