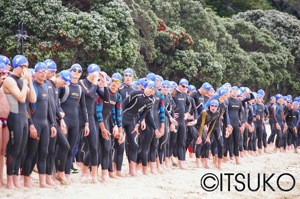 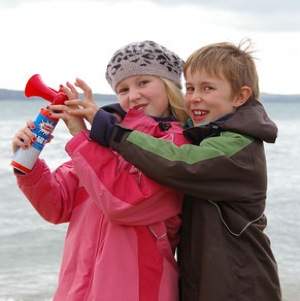 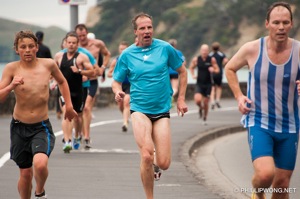 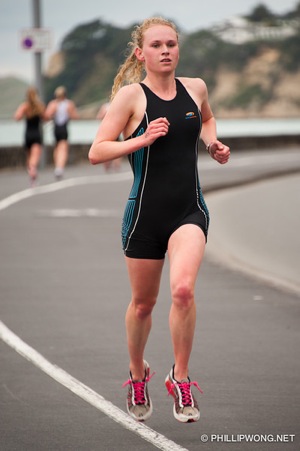 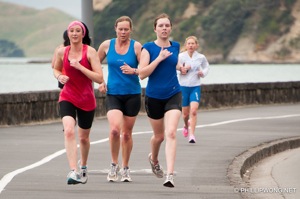 Anyone that prefers their races to be fast had a lot to like at the second event in the Stroke & Stride Series at Auckland’s Mission Bay.  First up was a 750 metre swim that involved a 350 metre leg aiming straight at the summit of Rangitito Island, then a short 50 metre hop a cross the back before the 350 metre sprint back into the beach.  Any wind was heading offshore and hardly making itself felt and if anything the incoming tide was assisting the swimmers as they circumnavigated the course.

Then for the 4 kilometre run leg it was a simple jaunt down TamakI Drive to the turn cone at St Heliers Bay before retracing your steps back to the finish on the beach at Mission Bay.  Not a hill in sight and temperatures never got higher than balmy so it was all set for super quick times and the only obstacle that could make today’s course tough would be any challenges being thrown down by your opposition.

First away were the men and the first thing we notice was Brent Foster immediately surging away from the field as he made a beeline for that distant swim buoy. While Brent was soloing off the front the chasing men seemed to be locked into their own battle for second and at swim’s end our leader’s red hot time of 8 minutes 32 seconds was good enough for half a minute of head start.  However in that tight group hovering 30 seconds back were athletes the calibre of Sam Franklin, Ryan Sissons, Sam Ward, Nick Berry and Liam Scopes who have each won Stroke & Stride events in recent times.

Also chasing the men’s field were all the women when their race got underway exactly 10 minutes later.  Again the conditions were about as good as we can hope for, again their was one swimmer going off the front and once again at swim’s end it was Sophie Corbidge hitting the beach in first place.  Two weeks earlier Sophie Corbidge had led from wire to wire when she won the season opener, half way through Race #2 the exact same plan was being executed to perfection.  Sophie’s foot-to-the-floor swim leg clocked a time of 9 minutes 35 seconds and rewarded her with a 12 second lead over Natasha Bowyer.  The chasers came thick and fast another 10 seconds after that and not to be outdone the women’s field was stacked with previous race winners including the prolific Samantha Warriner and Elise Salt and Jessica Lawson all in contention.  Soon after it was a cast of hundred’s setting off in hot pursuit of the race leaders.

A fast course still rewards the fastest athlete and in recent years Ryan Sissons has been unbeatable when he has raced at the Stroke & Stride.  Taking time out from his international race schedule for a return to his local race our 2009 Series Champion is once again all class as he edges past the swim leader Brent Foster on the later part of the run.  Ryan Sisson’s victory takes him up to an impressive eight wins on the all time table and into some impressive company.  Third a fortnight ago and second this week a delighted Brent Foster continues to improve and is only 5 seconds behind at the finish line.  He was winning his first ever Stroke & Stride a fortnight ago and now Sam Ward backs that up with another podium finish holding off the hard charging James Bowstead and Sam Kidd.

When you are hot, you’re hot and that is Sophie Corbidge at the start of this season.  She lights it up again with another start to finish win and her perfect start continues – fastest swim on the day backed up with the fastest run will do that for you.  This is Sophie’s fifth ever Stroke & Stride victory.  Samantha Warriner has 24 of those wins in the bank and the form our two time Series Champion has displayed early this season firmly announces that Samantha Warriner is back.  On maternity leave earlier this year Samantha delivers a 5th place finish at the first race and just two weeks later a truly awesome 2nd place.  Completing the podium is Alana Lythe, another athlete in great early season form and getting home ahead of fast-finishing Jessica Lawson who had pulled clear of Elise Salt in the later stages of the run.

After two events our Grand Prix points for the men is delicately poised with the up-and-coming Sam Ward just three points clear of the never-ever-slowdown Brent Foster.  While Sam Kidd, James Bowstead, Nick Berry, Ryan Sissons, Daniel Hoy, Sam Franklin and Cooper Rand are currently only one win away from first place.  Sophie Corbidge has got a bit of daylight between her and the rest on their side of the Grand Prix table however she can’t relax with Samantha Warriner, Elise Salt, Jessica Lawson and Alana Lythe all still in striking distance at the Stroke & Stride.

The next event is on Wednesday, December 12th