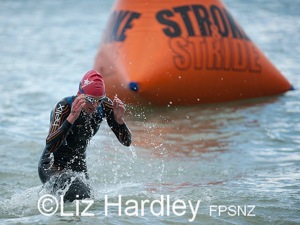 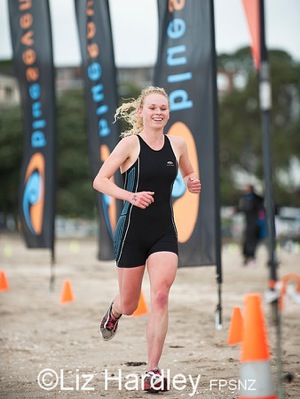 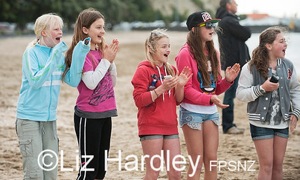 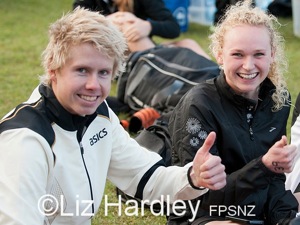 The first Stroke & Stride of the season is held in Auckland in the spring and that means it is likely to be windy, especially in the afternoon and especially at the beach. Therefore the westerly 20 knot gusts blasting down the harbour were almost expected and the competitors felt fortunate that their little 500 metre swim was able to be set so that they were relatively sheltered from the turbulence.

The women’s field were first to take on the elements and by the halfway mark one swimmer had broken clear from her pursuers and at swim’s end had opened up a sizeable and most useful 15 second gap back to the pack. It was Sophie Corbidge putting the hammer down at the front and she soon ran up the beach and into transition with that hard won lead clocking 6 minutes 36 seconds. Danielle Parkinson was next to touch the sand and she had plenty of company as it was then just seconds separating the continuous stream of swimmers exiting the swim and heading for their running shoes.

The sizeable men’s field witnessed all this action from their prime vantage point on the beach as they anxiously waited the 10 minutes to countdown for their start. They were also super quick around the cans and the leading two swimmers went very close to going under 6 minutes. Brent Foster led out in 6 minutes 3 seconds with Sam Franklin on his heels as they sprinted up the beach and into the change area. Similar story as earlier as soon following them and their 20 second was a chase group consisting of literally hundreds of men.

If those swim conditions were tolerable then the first half of the run was even more fun as large parts of the outward journey to the turn cone at St Heliers Bay were wind assisted. If athletes have the necessary leg speed to match nature’s push from behind then they could really fly. Sophie Corbidge was one that was happy to have just that breeze for company and made sure no one else got even close. Then when she rounded the turn it was a case of concentrating, holding her form and digging deep as she sliced through the head wind all the way back to the finish line and victory at the first Stroke & Stride of the season. This is something Sophie is making a habit of as she has won the season opener on numerous occasions, most recently just 12 months ago. Having her own tremendous race was Nicole van der Kaay running away from the rest of the field to take a fine second place and her best ever finish at the Stroke & Stride for this young athlete. Anneke Jenkins was debuting at Stroke & Stride and scored herself a podium so watch this space. An excellent run split allowed Elise Salt to hang onto fourth place and hold off many times champion Samantha Warriner back racing after a few years absence from the ranks.

When Brent Foster and Sam Franklin started their 5 kilometre run they knew it was going to be a big ask to stay ahead of some very classy runners that had them in their sights and were really only a matter of seconds in arrears. Fifteen minutes later when the leading men rounded the point and came back into view of the crowd at the finish it was another duo at the head of the field. Sam Ward was having the race of his life and ran through to win his first ever Stroke & Stride and just handful of seconds in front of Sam Kidd scoring his first ever podium finish. Another legendary performance from the masterful Brent Foster got him the remaining podium position while James Bowstead had a fine race to grab fourth place ahead of the always dangerous and our reigning champion Nick Berry.

So while no one eclipsed their rivals on this auspicious day Sophie Corbidge again makes the early running and has the lead in the Series Grand Prix ahead of a couple of relative novices – but very quick novices in Nicole van der Kaay and Anneke Jenkins. Meanwhile Sam Ward is in a position he has never found himself in before – holding the lead in the battle to win the celebrated Stroke & Stride championship. The next four months of summer and seven events promises plenty of action before the final race at the end of March.

The entertainment resumes at the next event is on Wednesday, November 28