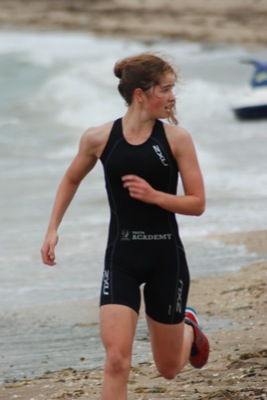 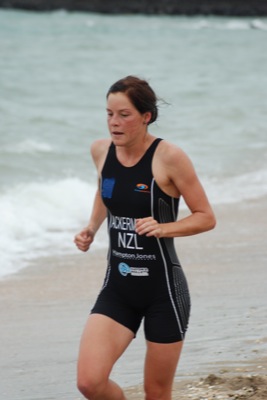 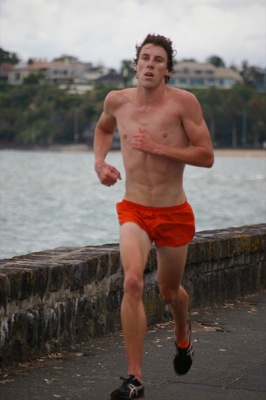 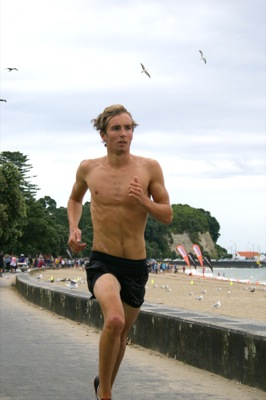 It can be a cruel twist when the shortest swim of the season also turns out to be the hilliest and this is exactly what confronted competitors at the sixth event in the 2XU Stroke & Stride Series. For some swimrun athletes swimming is not their forte or not their preferred sport and therefore the little half a kilometre swim distance is looked forward to. It can give them the chance to get out on the run very close to their competition rather than having to chase them from a distance.

It may have been the middle of our best month however summer would not be the first word to come to mind when describing the conditions at Mission Bay on this afternoon. A stiff but not the worst of breezes was blowing; then again it was unrelenting and it was coming from the north. This onshore wind decorated the Waitemata Harbour with white caps and chopped up our little swim course considerably.

And while some were frustrated by this messy sea state others revelled in it like our leading male swimmers who made short work of the first leg head-on into the chop and then surfed the waves all the way back to the beach. Best form and fastest swim time of the day went to Cameron Todd recording a smoking 6 minutes 25 seconds which was good enough for a 15 second lead over Nick Berry. There was then another 10 second gap back to the rest of the field who were soon streaming up the beach and into transition in quick succession.

The women’s field were watching all this and could ponder their own aquatic tactic as they awaited their start. As has been the case in recent events it was the experienced Simone Ackermann who read the conditions best and matched this with the necessary speed to lead the way out and around the cans and back into the beach clocking 7 minutes 21 seconds. This was good enough for a 10 second break on her pursuers and was probably the biggest gap we’d see as Jo Lawn, Maddie Dillon and Elise Salt emerged virtually side by side and the rest of the field wasn’t far behind.

In contrast to the swim the run was a long and scenic 5 kilometres hugging the coast all the way out and back to St Heliers plus there isn’t a hill in sight. Like the swim there was plenty of exposure to that wind. Some of it was a nagging crosswind, some an obstinate headwind and therefore there was some tailwind out there as well though this can be hiding when you are pushing the limits and want any assistance offered.

Looking relaxed all day was swim leader Cameron Todd who happily transformed to run leader and ultimately race winner without being threatened and taking a comfortable victory. Nick Berry was unable to make a dent in his deficit after the swim but certainly was well clear of all the chasers in second at the finish line. And by far the best of these chasers and taking the final podium spot was Cooper Rand with his best ever Stroke & Stride result. Likewise Patrick Tarpy from the USA was having his best result in fourth seconds ahead of Todd Rowan.

Whether the three times Stroke & Stride champion Simone Ackermann was following her own recipe for success or was copying today’s men’s winner it worked just fine. Exert the pressure during the short swim leg, open up a small gap exiting the water and through transition to start the run in front. Then run comfortably holding good form and do your own time trial over the 5 kilometres leaving the chasers to battle with each other in your wake. So Simone Ackermann wins again giving her a remarkable three from three in 2012. Conditions must have also been to the liking of Elise Salt as she ran away from her swim companions to take a fine second place and her best result of the season. Jo Lawn returns to Stroke & Stride without forgetting a trick and scores herself a fabulous third place ahead of Maddie Dillon. Jessica Lawson backs up her 8 minute 20 second swim with one of the day’s fastest run splits and is rewarded with fifth place and her own best ever result.

Our current Series Champion is on another winning streak so our current Grand Prix points table must show Simone Ackermann leading with a solid but not insurmountable 21 points over Rebecca Clarke and Maddie Dillon currently locked in second equal. All alone in fourth place is Elise Salt on 66 points ahead of Jessica Lawson and Alana Lythe tied in fifth.

Nick Berry comfortably leads the men’s Grand Prix on 80 points though he hasn’t had it all his own way with just the one victory while building his total. Cameron Todd holds second with two wins to his name while consistency rewards Cooper Rand with third position. Fighting to gain a foothold on the podium are Brent Foster, Liam Scopes and Sam Franklin with only a point or two between them.