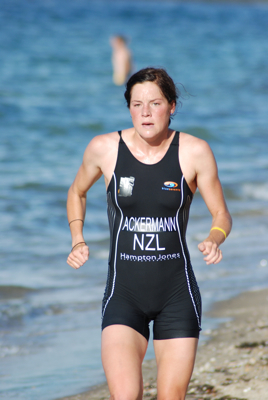 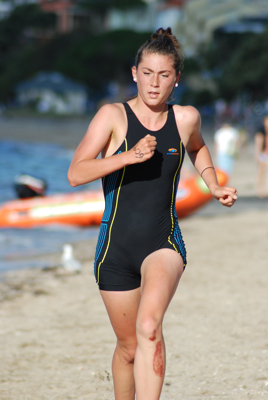 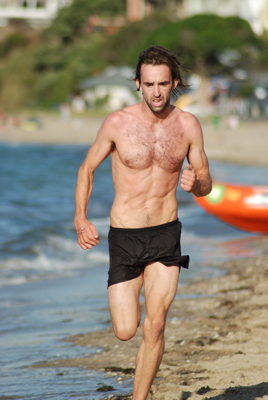 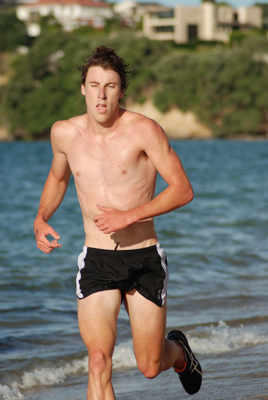 The 2XU Stroke & Stride launched into the second half of the season with Race #5. The series was using St Heliers Bay as the venue for the final time this summer and the grand old bay bowed out in style laying on a superb blue sky day with warm temperatures both out in the water and back on dry land – just like our summers used to be.

The 750 metre swim involved a 350 metre drag straight out to the first buoy, a quick 50 metres across the back before another long leg back to the shore. Hot and calm afternoons in Auckland generate sea breezes and a light onshore wind had kicked up a small chop or wave pattern to add interest for the swimmers as they negotiated the course.

This time it was the turn of the women’s field to start proceedings and the leaders were sighting well and holding straight lines as they covered the distance. This was not surprising with the vastly experienced Rebecca Clarke leading them in recording 9 minutes 39 seconds for her swim and 5 seconds ahead of the perhaps even more experienced Simone Ackermann. Trailing out of the water just a few seconds behind came Penny Hayes and Maddie Dillon with these four the only female swimmers dipping inside ten minutes as Elise Salt recorded 10 minutes 1 second with Alana Lythe hot on her heels.

We don’t know if the men’s field enjoy the pace being set in the swim by legendary Brent Foster however no one made a move to challenge him as he lead them out and around the cans once again. When he hits the beach in a smoking time of 8 minutes 26 seconds his lack of company at the head of the field is explained. The closest was our current series leader Sam Franklin recording 8 minutes 38 seconds with newcomer Harrison Dean looking dangerous and handily placed in 8 minutes 51 seconds. Nick Berry clocked 9 minutes 4 seconds, James Elvery 9 minutes 11 seconds and Cooper Rand 9 minutes 21 seconds before the incoming traffic intensified though we did spot the 10 minute and 8 second swim of Liam Scopes.

It has been a while, actually near on three months since the Stroke & Stride has had a run of more than 3 kilometres. Therefore the later stages of today’s 4 kilometre course may test the reserves of some athletes. It proved no problem for our leading women as they needed to run the distance in under 15 minutes to hold their placing after the swim. How much inside 15 minutes they could go would decide the ultimate finish order. Out on the footpath three time series Champion Simone Ackermann once again displays the ability to perform the swimrun combo better than the rest as she runs away with it to extend her perfect start to 2012 with her second victory. Meanwhile Maddie Dillon continues to excel this season running herself into second place ten seconds ahead of swim leader Rebecca Clarke. Seasoned competitor Elise Salt secures more valuable points with her fourth place while rookie Penny Hayes scores a fine top five finish at her first ever race.

The leading men were looking at something around 12 or 13 minutes for their 4 kilometres if they wanted to back up a quick swim split to finish in the money. South Islander Harrison Dean wasn’t accustomed to the Auckland run course that hugged the coastline of the Waitemata Harbour but this didn’t stop him going out as hard as possible, which soon rewarded him with the lead. He then held this advantage all way back to the finish at St Heliers Bay to record a fabulous win in his debut Stroke & Stride. Nick Berry was also running extremely well and got up himself up into second. After applying all the pressure during the swim Brent Foster held on for third out on the run and secured the final podium spot. James Elvery’s long awaited return to Stroke & Stride saw him finish in fourth while Liam Scopes claimed the fifth place. And as an example of the rarefied air at the sharp end of this event; the four athletes that Harrison Dean beat home today are all previous Stroke & Stride event winners.

With her victory at Race #5 defending champ Simone Ackermann has now moved into her accustomed and preferred position at the top of the Grand Prix points table. However her lead is not exactly comfortable; miniscule would be the more accurate description of the one point margin back to Rebecca Clarke. Another one point is the difference between Maddie Dillon and Elise Salt as they battle for the remaining podium position and there’s no difference at all between Alan Lythe and Elizabeth May locked together in fifth place.

Sam Franklin didn’t score any points at Race #5 and plummeted from the Series Grand Prix lead down into fifth place in the men’s division. Nick Berry now leads with a decisive looking 13 point lead over Brent Foster who in turn leads the duo of Cooper Rand and Liam Scopes by a pair of points.