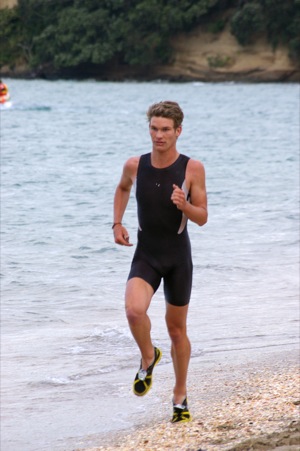 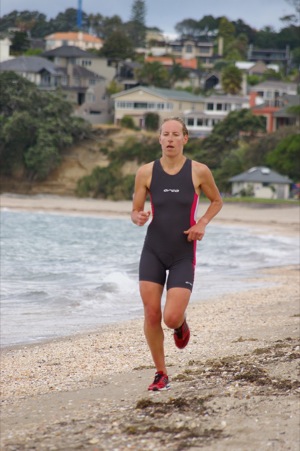 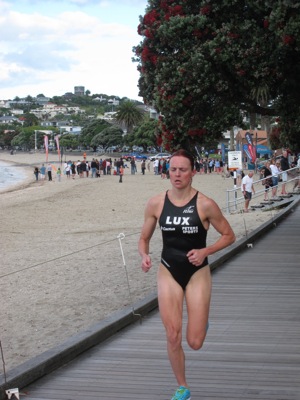 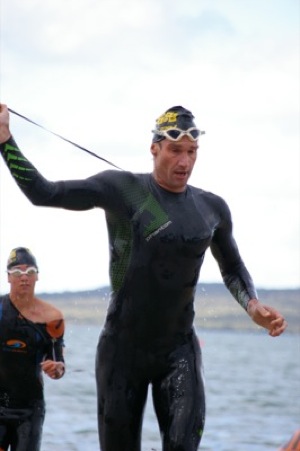 The 2XU Stroke & Stride Series said goodbye to 2011 when the third race of the season took place at St Heliers Bay. At the same time the Series welcomed back their very own legend Brent Foster when he returned to the beach for his first competitive foray since March 2010.

The December edition of Stroke & Stride is held over a big one kilometre swim and just three kilometre run so the swim leg was critical. The aquatic portion may make up 25 percent of the course on the ruler however that is 60 percent of the time spent racing for most athletes.

The conditions varied through the afternoon. The brisk breeze couldn’t decide which direction it preferred as it boxed around the westerly quadrant of the compass. When the women’s field started the swim it had largely settled down so that only the third leg of the triangular course was hard work for the swimmers. Two female swimmers pulled away from the rest of their field throughout the swim and had opened up a half minute lead by the time they completed the swim. Rebecca Clarke lead the way recording 13 minutes 33 seconds with Elizabeth May securely attached to her feet and recording a time just one second slower when she touched the beach.

The men’s field encountered the same conditions however the leaders also had to navigate their way through the back of the women’s field as they closed on the final buoy. Again we had two swimmers leading out however neither of these guys was prepared to follow and they were side-by-side swimming parallel to the shore on the third leg. It wasn’t really surprising for the crowd to see Brent Foster take the swim by just 3 seconds over Cameron Todd. Trailing these two by a mere 10 seconds was Sam Franklin with then the big half minute gap back to the chasers.

Different race venue means different run direction for Race #3 of the season so this time the westerly breeze blowing meant a head wind out to the turnaround and then the reward of the tailwind on the way home. A large part of this run is beneath the spectacular pohutukawa blossoms to the turn at Kohimarama however none of our front runners were soaking up the view. Luxembourg’s Elizabeth May won her first Stroke & Stride a fortnight ago and leaving the transition at the start of the 3000 metre sprint this week she promptly made her intentions clear immediately opening up a lead on Rebecca Clarke. It was just a handful of minutes later and they were back in sight and closing on the finish with the only change out on the run being that the separation had increased as Elizabeth May ran home a clear winner for her second win in a row. Rebecca Clarke gets better each race and follows up her 4th place at Race #1 and 3rd place at Race #2 with a superb 2nd place today. New Zealand’s Elise Salt and Rebecca Witinok-Huber from the United States didn’t manage to take time out of the leading duo but did sort out that final podium spot with the kiwi getting ahead of the American at the finish. Alana Lythe followed up her 15 minute 12 second swim with a strong run and 5th place.

By the time the leading men cam back into view it was still a neck and neck two-way battle however the players had changed. It was still Brent Foster putting the squeeze on but now it was Sam Franklin that had run up to the shoulder of the leader. The final 100 metres of the St Heliers Bay run are filled with a ninety-degree turn, negotiating a boat ramp and then the questionable footing provided by the sand up to the finish line. The experience of Brent Foster told him not to wait for this section and he hit the turbo 200 metres from the finish and got the few seconds lead which he held to the line for his incredible 70th Stroke & Stride victory. Sam Franklin stepped up to show he is a worthy adversary with his credible second place today. Cameron Todd claimed the third podium position just ahead of fast closing Sam Ward. Cooper Rand had his best finish of the season taking fifth place.

Three strong races rewards Rebecca Clarke and Sam Franklin with deserved leads in the Series Grand Prix as everyone now heads into their New Year break.