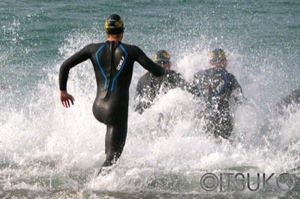 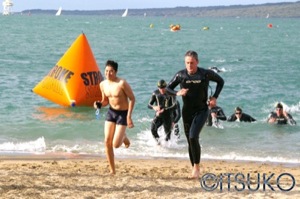 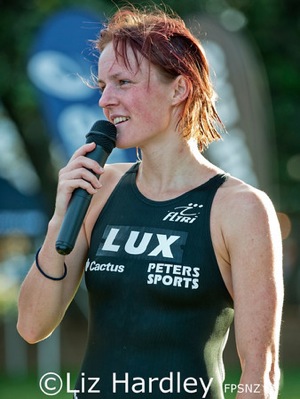 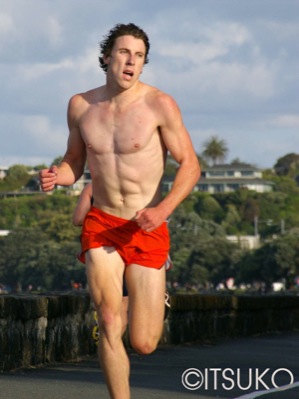 Winning a Stroke & Stride is no easy thing. Many tens of thousands of athletes have raced these events over the years and after 173 events we have a total of just 40 men that have won a race and even fewer women. This select group carefully guard the door of their exclusive champion’s club and are none too keen on extending their membership. So for one event to crown two brand new Stroke & Stride winners is a rarity indeed.

The afternoon of the second event in the summer’s 2XU Stroke & Stride Series was once again a windblown affair but fortunately the Mission Bay venue was sheltered from most of it. The swim course was even set to take full advantage of the conditions. If this were a sailboat race the course would have been described as all reaching and downwind legs.

The men’s field were first underway and it was first time Stroke & Stride athlete Lawrence Hull who dropped the hammer on the guys as he went to the front and had opened up a 10 metre lead when he reached the shore clocking a smoking 8 minutes 49 seconds. Sam Franklin was the closest and the only other swimmer under 9 minutes as all the competitors revelled in swimming with the wind at their backs.

As the leading guys were sprinting into transition the female field started their 750 metre swim out and around the cans and back into the beach. Serial Stroke & Stride winner and current Series Champion Simone Ackermann lead them out in 9 minutes and 40 seconds with Rebecca Clarke and Elizabeth May breathing down her neck. This leading trio had opened up a nice gap, as the next swimmers didn’t strike the shore until 10 minutes had elapsed on the clock with Maddie Dillon recording 10 minutes and 3 seconds.

The flat and fast 4 kilometre run course headed basically east to the turn cone at St Heliers Bay and then retraced their route to the finish at Mission Bay. Therefore the westerly breeze was at everyone’s back for the first half and if we revert to the sailing analogy it was all about being close hauled and plenty of tacking for large periods of the return journey. Whether under sail or on foot this doesn’t make for the most pleasant of passages however it is often where the greatest of gains can be made.

Profiting most during this stretch of the race was Nick Berry. He burst free from the pack of swimmers he had for company during the swim, then ran up to and past the few runners that were ahead of him and extended his lead to run home for the victory. Last season his best result was a third placing, this season he has gone straight to the top of the class with his first ever Stroke & Stride win. Twelve seconds in arrears came defending Series Champion Michael Poole with another six seconds to Sam Franklin picking up the bronze. These two repeated their placings from the previous fortnight. Liam Scopes claimed 4th place and Mark Bowstead rounded out the top 5 men.

At the start of the run it was a three horse race for the women and looking very close to a repeat of the final event from last season with the same three athletes again being close throughout the swim and the decisive move happening out on the run course. However this time it was soon down to two athletes as they duelled their way up and down the waterfront. Back in March it was Simone Ackermann getting her nose in front but this time it was Elizabeth May dictating the terms as she accelerated and opened up the decisive break before they got back in sight of the finish. So Elizabeth May from Luxembourg returns to Auckland and the Stroke & Stride and wins her first ever race with a measured and polished display of swimming and running prowess. Simone Ackermann was forced back to the unaccustomed runner up position this time. Third place goes to Rebecca Clarke having her best ever start to a season and staying ahead of the talented Maddie Dillon and Elise Salt.

After two events it is not the usual dazzling results but the consistency of champion Simone Ackermann that rewards her with a handy 6 point lead in the Series Grand Prix. She will need to keep her guard up as presently tied in second are Rebecca Clarke and Maddie Dillon who both have an eye on that top position this season.

Defending Series Champion Michael Poole also has the lead in the Grand Prix with his own 34 points however his margin is even slimmer over Sam Franklin and Nick Berry. Right now everyone has six more events and four months of summer to sort out those crucial final points.