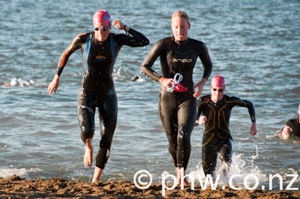 Race #8 is the final and deciding event in the 2XU sponsored Stroke & Stride Series and to spice it up even further it also doubles as the 19th running of the annual New Zealand Swimrun Championship.

The last race of the summer was once again held on a sparkling Auckland afternoon. The sequence of great weather through the summer was unprecedented as not once this season have competitors endured a battering from winds or driving rain. Summer how it should be. With the weather being so temperate it was left to the competitors to great a storm as they battled for overall Series honours. In the woman’s field it was looking like a major derailment in the form of Simone Ackermann would be necessary to deny her regaining the title of Series Champion for the third year running however Elise Salt was ready to pounce at the first sign of speed wobbles while Alana Lythe and Rebecca Clarke were also happy to step up and spoil the party. For the men it was much the same story with Michael Poole holding a handy lead going into the finale and Sam Franklin doing his best to keep it competitive.

The 1000 metre swim around the big triangle was expected to be a major influence on the end results as too much time lost in the water can be near impossible to peg back on the subsequent 4 kilometre run. Anticipation was high as the pumped up athletes in the large men’s field lined the beach awaiting the start. Once underway it was clearly visible after the first four hundred metres that a pair of swimmers had broken free from the field rounding the first buoy. This advantage was not capitalised on however as the leading duo went askew on the second leg allowing their pursuers to close the gap. When they reached the beach it was Cameron Todd clocking 12 minutes and 18 seconds with Sam Franklin on his toes. The chasers were lead in by Michael Poole with a time of 12 minutes 39 seconds.

The woman’s field had three off the front and they weren’t to be distracted by the sun in their eyes with Rebecca Clarke and Simone Ackermann hitting the shore in unison recording 13 minutes 11 seconds with Luxembourger Elizabeth May sitting in close behind. Forty-five seconds further back came Elise Salt in fourth place.

Athletes now had the blazing sun at their backs for the outward leg of the 4 kilometre run before turning at St Heliers for the return to Mission Bay. On the outward journey Cameron Todd and Sam Franklin went their own ways. Sam Franklin couldn’t keep the pace set by the slightly faster Cameron Todd and then it was Elliot Frizelle that ran himself up into the gap that had opened between the leaders. On the finish line it was a repeat of Round #7 as Cameron Todd takes another close victory and the title of New Zealand Swimrun Champion for 2011. Elliot Frizelle equals his best result of the summer and claims the treasured second spot ahead of Sam Franklin. Michael Poole didn’t display the scorching form he had in earlier races however still records the very respectable fourth place ahead of Liam Scopes finishing in fifth for the third race in a row

After a swim that had our leading trio cosy in close proximity it was now time to take their gloves off on their run to sort out the placings. Going for the knockout looked to be Simone Ackermann as she stretched out to a lead running beneath the pohutukawas flanking the shoreline of Kohimarama. When you add the days fastest run split to a stellar swim then it should be an unstoppable combination and so it proved as Simone Ackermann sealed the victory and back-to-back New Zealand Swimrun titles. Chasing hard all the way saw debutante Elizabeth May hold onto second place at the line ahead of Elise Salt. Alana Lythe capped her great season running herself up into fourth while Rebecca Clarke claimed more valuable points running home in fifth.

The Series Grand Prix is contested over the eight race Series with points from the final race and an athlete’s best five other performances to count to their overall total. Simone Ackermann (1st, 1st, 1st, 1st, 1st & 1st) with her unblemished record was clearly the strongest athlete through the long months of summer and is rewarded by regaining the Stroke & Stride Championship with her 120 point total. Having her best season Elise Salt (1st, 2nd, 3rd, 4th, 3rd & 3rd) on 95 points finished runner up ahead of the 88 points accrued by her friend and adversary Alana Lythe (3rd, 3rd, 4th, 3rd, 2nd & 4th). Consistency rewards Rebecca Clarke Clarke (2nd, 1st, 4th, 6th, 5th & 5th) with 82 points keeping her clear of Lizzie Orchard (5th, 4th, 3rd, 5th, 6th & 6th) who ended the Series in fifth position.

Having a golden start to the season winning the first three events ensured that Michael Poole (1st, 1st, 1st, 2nd, 1st & 4th) was always going to be tough to catch and so it proved as he went onto win the Stroke & Stride Series Championship for the first time. Sam Franklin (3rd, 2nd, 1st, 2nd, 2nd & 3rd) never had a bad race and is rewarded with second overall in the Series Grand Prix. The much improved Elliott Frizelle (2nd, 3rd, 4th, 3rd, 3rd & 2nd) did everything but get a win this summer but also never put a foot wrong and was very worthy of his podium finish. Cameron Todd (2nd, 5th, 1st, 1st & 1st) racked up three victories but needed one more result to lift him higher in the standings while consistency rewarded Sam Morreau (5th, 4th, 6th, 4th, 4th & 6th) with fifth place for this summer.