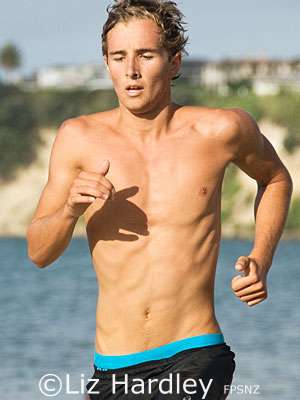 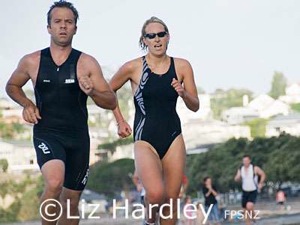 The start of a New Year heralds a host of resolute athletes determined to finally finish at the very front of the field. Meanwhile past Stroke & Stride winners are just as stubborn in their desire to keep their small club exclusive. However with four male and just two female previous winners on the start line at Race #4 in the 2XU Stroke & Stride Series the select clubroom door could be ajar.

Auckland has sweltered through seven weeks of glorious summer since our last event and then the preceding day we got tickled up with the remnants of tropical cyclone Zelia. However race day weather conditions received top marks with even our obligatory afternoon breeze pointing in the right direction to keep the swim course flat and fast. Can anyone remember the Waitemata Harbour’s sparkling waters being any warmer?

The men’s field were quickly into their work with one swimmer immediately jumping clear going on to build a sizeable advantage over the kilometre swim course. Super swimmer Cameron Todd was putting the hurt on at the front recording a sizzling 11 minutes 44 seconds as he hit the sand. This gave him more than half a minutes lead over the chasing possie being lead in by Sam Franklin, Michael Poole, Elliott Frizelle and Andrew Farrell and a full minute start over other contenders. It was looking like the winning move had already been made.

Ten minutes later the women’s field were having their spin around the swim course and the race tactics appeared to be playing out exactly the same. As their swim progressed Rebecca Clarke displayed her aquatic prowess by steadily moving clear of the field extending to a whopping 45 seconds advantage as she ran up the beach and into transition. Those chasing hard and doing their best to limit this damaging deficit were headed by Elise Salt, Rebecca Annan and Alana Lythe.

Immediately following the swim and change into run shoes the athletes face a short and sharp run taking them as far as the end of Kohimarama Beach before returning to the finish on St Heliers Bay. It is only 3 kilometres but that doesn’t mean it has to be easy. If you’re defending a lead or chasing down someone just ahead those few kilometres can end up being spent entirely in the red zone.

Cameron Todd was a revelation last summer taking a hat trick of victories, his performance in the first event of 2011 shows he is back to his best. His crushing swim was backed up by fleet-footed run leg to give him a comfortable win. Michael Poole was unable to continue his string of first places but was still able to get himself up into second for this race holding off the dangerous Elliot Frizelle. Running home next was Sam Franklin and Nick Berry just missing the podium this time.

Rebecca Clarke has a long history at Stroke & Stride; she has always done well in the swim and over the years her run has steadily improved so that she is now an overall contender at the swimrun events. Race #3 in December saw a break through performance when she finished runner up to Elise Salt. Now in the New Year she claims outright victory with a fine run on the back of an indomitable swim to claim her very own race win for the first time. Chasing hard all day rewards Elise Salt with that valuable second placing. The day’s fastest run on the back of a strong swim rewards Lizzie Orchard with third place and her best ever Stroke & Stride result. Alana Lythe continues her strong season taking fourth spot ahead of Rebecca Annan also scoring her very own best ever Stroke & Stride result.

It is now halftime in the Series and a prime time for scrutinising just who is where in the Grand Prix. Currently the young ones rule, Elise Salt has a very useful 8 point lead over Alana Lythe. Then Lizzie Orchard has 3 points advantage over Rebecca Clarke. Certainly not out of it is multiple times Series Champion Simone Ackermann on 40 points lurking ominously in fifth place.

The guys is more clear cut with Michael Poole’s most excellent season giving him a 17 point lead over Sam Franklin who has 12 points in hand over Cameron Todd. Then it tightens up as Nick Berry is only a solitary point away from the podium and Elliot Frizelle is only another two points adrift. An eight race series can be a game of two halves so we’ll all stay tuned to see what unfolds in the four events to come.