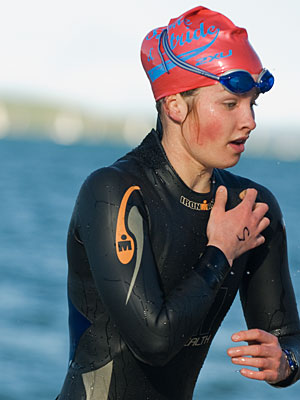 The month of December brings the Christmas edition of the 2XU Stroke & Stride Series to Auckland. This event always brings out plenty of red race costumes, which is quite appropriate with all the red hot racing taking place on a warm summer’s afternoon.

The 166th Stroke & Stride is contested over a 1000 metre swim and a 3 kilometre run. Just like the two preceding events this season competitors were presented with conditions conducive to a great day at the beach with sunshine, plenty of warmth and light onshore breeze. However these benign conditions had a hidden sting in their tail which would upset a few race plans.

The women’s field were started first for the kilometre swim over a big triangular course with 400 metres out to the first turn buoy directly in front of the beach. Progress was slow on this outward leg as while standing on the shore the water conditions would be described as slight it wasn’t so out the back. The low outgoing tide conspired with the opposing wind direction to throw up a steep little chop. This sea state was miles away from anything you’d encounter at the local pool however this is the sort of challenge Stroke & Stride competitors train for and look to test themselves with.

Not surprising therefore that Rebecca Clarke who is one of our best performed swimmers ended up leading out of the water in a time of 14 minutes 17 seconds. Twenty-five seconds later our other most excellent swimmer Elise Salt exited the swim and headed up into transition. It was looking good for the leading duo as they were the only swimmers to go under 15 minutes and the clock had ticked up to 16 minutes before a number of their expected chasers had gotten back on dry land.

Meanwhile ten minutes in arrears the men’s field were battling the same conditions and there was also big gaps opening up, as the aquatically adroit seemed able to stay on top of the conditions. Michael Poole leads out the swim in 12 minutes 47 seconds and was followed In by Sam Franklin and Nick Berry. These three had all earned themselves a half a minute buffer over their pursuers, which can be quite a lot when there’s but 3 kilometres of running between here and the finish line.

That 3 kilometres is an out and back run alongside Kohimarama Beach with the finish back on the sands of St Heliers Bay. Young Elise Salt has always been a leading contender in the Stroke & Stride swims over the past couple of seasons. For today’s race she pulls out a run to match her swim as she sweeps past the sole athlete ahead of her to come home a most convincing winner in the final Stroke & Stride of 2010 and scores her first ever Stroke & Stride victory. Swim leader Rebecca Clarke finishes in second for her best ever Stroke & Stride result while fleet-of-foot Alana Lythe runs through to repeat her third place from Race #1. Lizzie Orchard is another running hot getting up to take fourth just seconds ahead of Anneka Herdson who was also having the best race of her career.

It looks like Michael Poole owns Stroke & Stride; we’ve head three races and for the third time he swims as good as anyone and then runs better than anyone. This sort of form earns him his third victory and maximum points and a huge amount of respect from everyone trailing him across the line. Doing his utmost to keep Michael on his toes is our silver medallist Sam Franklin with his best Stroke & Stride result ever ahead of the two bronzes he collected at races one and two. In this day of best ever results it is no surprise to see the fast improving Nick Berry haul himself onto the podium for the first time heading off the more experienced Sam Morreau and Cameron Burstall.

The Stroke & Stride Series now has an extended seven week break and while the Grand Prix points in the bank now won’t gain any interest over the holidays it is comforting to have a healthy balance. Michael Poole is the richest with his 60 points being the maximum possible at this stage of the season. Replicating this race’s result sees Sam Franklin and Nick Berry the next closest while Cameron Burstall, Elliott Frizelle and Sam Morreau are locked together on 30 points.

Elise Salt took her race to a whole new level at Race #3 and is further rewarded with the lead in the Series Grand Prix. It will be game on in the New Year as tied in second and just four points in arrears is ultra experienced defending Series Champ Simone Ackermann and seriously quick Alana Lythe. Then there is only a point between Lizzie Orchard and Sophie Corbidge. A mouth-watering back half of the summer now looms.