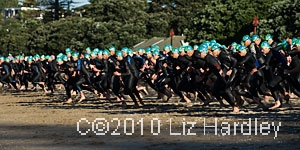 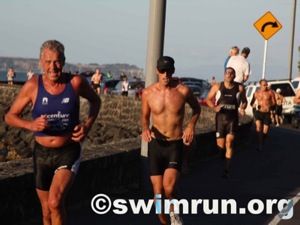 There’s a lot riding on the final event in the 2XU Stroke & Stride Series. It is the culmination of a whole summer of racing with the last chance to secure those elusive points. It is also the 2010 New Zealand Swimrun Championships and the associated bragging rights that goes with owning that title for the next twelve months.

This Auckland summer has been very good to the Stroke & Stride and for the finale in the middle of March – which is now officially autumn – the weather was straight out of mid summer. The days may now be a bit shorter however for our afternoon at the beach it was an uninterrupted blue-sky day with the temps up there in the region of warm bordering on hot. Of course the obligatory wind was blowing but we wouldn’t expect anything else at the Stroke & Stride.

The swim for the championship event is over a 1000 metre course with the first buoy in line with Rangitoto Island nearly 500 metres offshore of the beach at Mission Bay. The men’s field were the first to start. The large crowd watching and all the females on the start line were then entertained as the guys demonstrated that while travelling a straight line between two points is oft believed to be the shortest route they were keen to look for a short cut by weaving their way out to that first can. We realise that south-westerly was making itself felt and the tide was doing its thing and that most of you just follow whoever happens to be in front but really guys.

Our women’s field had no intention of swimming anymore than the necessary 1000 metres. They held a much straighter line navigating their swim with Maddie Dillon this time leading them out in the time of 13 minutes 45 seconds. Sitting ominously on her toes was Simone Ackermann with Georgia Lloyd also very handily placed running into transition.

The run is a flat 4 kilometres out and back with a generous tailwind propelling you towards St Heliers and then an onerous headwind confronting you coming home. Plus as earlier mentioned it was still really quite warm out there, which can also prove taxing when your legs start to tire.

Back at the race it was Liam Scopes and his legendary leg speed again doing the most damage out on the road running himself up into second place edging Sam Franklin back into third. The podium was followed in by Sam Morreau and Lee Greer.

Our defending Series Champion Simone Ackermann has been prominent but not dominant all summer long with more than twelve months now passed since her last Stroke & Stride victory. This race was going to change that record with Simone hitting the outright lead soon after the swim. She extended that lead over the course of the run to record a comfortable win at the vital last race of the season. Furthermore Simone Ackermann collects her first New Zealand Swimrun title and adds her name to that illustrious list of champions dating back to 1993.

Maddie Dillon may be young however she demonstrates a lot of maturity out on the racetrack and her second place finish today again reinforces her as one to watch in future years. Third place goes to Georgia Lloyd another up and coming athlete recording her best Stroke & Stride result ever. More experienced Lizzie Orchard uses her best result of the season to secure fourth place ahead of another of the younger ones with fifth place goes to Elise Salt who also gets better with every outing.

Back to Brent Foster. We have lost count of how many birthdays he’s racked up and we have exhausted our supply of adjectives for his performances. However we can tell you his victory in Race #8 caps off a fabulous season winning him the Stroke & Stride Championship and the name Brent Foster will now be engraved on the Stroke & Stride cup for the 15th time.

A string of fine results since November has Liam Scopes in second place for the year improving on last season’s fourth. Sam Franklin is the big mover jumping from seventh in 2009 to a terrific third in 2010 with Sam Morreau and Cameron Todd endeavouring to keep him honest.

To win the Series you need to put together a whole summer of strong, consistent performances and while many thousands have toed the start line only a dozen women have got to the top of that particular mountain. To repeat the following season is therefore truly outstanding for Simone Ackermann as she takes her Stroke & Stride Championship title home again. Runner up Carmel Hanly had her season cruelly disrupted at the final hurdle and while surely disappointed there’s nothing wrong with second place in this competition. Getting better each year sees Maddie Dillon lift herself onto the podium in third place ahead of Lizzie Orchard and Elise Salt.