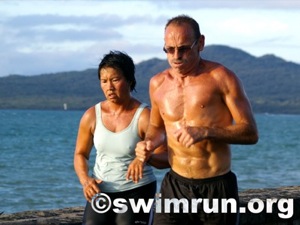 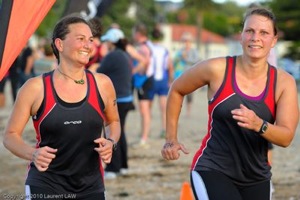 When there are only two events left in a season the time for talk is over, either put your best results together now or you may as well save it for next season. Much the same can be said for the weather as by late February the summer is on its way out however Auckland turned it on for us with one of the hottest days we’ve had. Competitors at Race #7 of the 2XU Stroke & Stride Series faced heated competition combined with sweltering temperatures.

The women’s field lead off for the 750 metre swim leg with extra sparkle added to the waters of the Waitemata Harbour courtesy of the directly onshore wind and the fast disappearing tide at Mission Bay. What looked like sparkle from the shore was actually a steep metre high chop in places for the swimmers to contend with. Good swimmers have the ability to stroke through these conditions without much difficulty, excellent swimmers don’t let it slow them down at all and utilize what others are finding arduous to extend their lead.

Legendary Jo Lawn nailed the swim using her power and endurance to keep herself on top of the chop while her inbuilt navigation unit guided her directly from buoy to buoy and back into the beach. Jo Lawn records 10 minutes 17 seconds for the swim leg, next was Simone Ackermann with 10 minutes 41 seconds and then came Elise Salt, Maddie Dillon and Carmel Hanly sneaking in under 11 minutes.

While one had gone off the front in the women’s race it was a pair of swimmers going hard at the front of the men’s field. Leading our race were two of the best in the business in Brent Foster and Cameron Todd as they displayed their class with an outstanding sub 9 minute time and a valuable half minute lead over the chasers lead in by Sam Franklin.

For the 5 kilometre run to St Heliers Bay and back the breeze was mostly on the nose heading out and therefore a tailwind at times for the return. Trouble is that tailwinds when running can be barely discernible and in the closing stages of a fast 5 kilometres when the legs are protesting a wind at your back doesn’t feel like much aid at all.

Carmel Hanly doesn’t march to victory, she runs. And she runs a lot faster than any other female competitor, which gives her a huge advantage on these long runs. Throwing down a 17 minute time for the 5 kilometres rewards Carmel with her own hat trick of victories for the summer. And once again this season the best of the next is current Series champion Simone Ackermann squeezing ahead of swim leader Jo Lawn. Maddie Dillon snares the fourth position with Lizzie Orchard rounding out the top five.

Brent Foster and Cameron Todd were happy enough to keep each other company out on the water but when they got back on land they were just as determined to gain some separation. For the third time this season Cameron Todd displayed a change of pace at the crucial time allowing him to move into the lead and score his hat trick of victories. Brent Foster trailed him by just seven seconds while Sam Franklin and Sam Morreau scorched up the pavement with the fastest run splits of the day to secure themselves third and fourth. A fabulous Stroke & Stride debut saw Nick Berry score himself fifth place.

Despite winning just two races of the seven events to date this summer Brent Foster has built himself a commanding 14 point lead over Liam Scopes. Sam Franklin will defend his podium spot at the finale with the dangerous Cameron Todd and Sam Morreau close enough to strike.

It certainly hasn’t been easy but Carmel Hanly has accumulated 92 points giving her a 7 point advantage over Simone Ackermann going into the season finale. Maddie Dillon looks secure in the remaining podium spot.