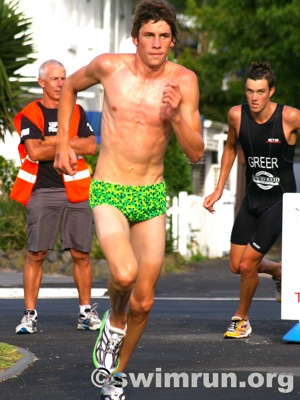 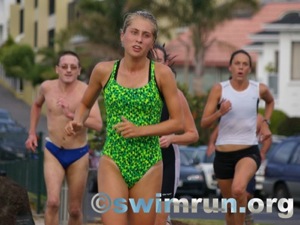 The sixth event in the 2XU Stroke & Stride Series rode into town on the back of a gusty southwester spitting out an occasional shower. Fortunately for the multitude of competitors and spectators gathered on the beach the wind was blowing offshore and any precipitation was of the lightest variety as it brushed past St Heliers Bay and out towards Auckland’s iconic volcanic Rangitoto Island.

Five hundred metres of swimming hardly seems worth getting wet for however even seconds lost out on the water can prove crucial down the road when the finish line comes into sight. The men’s field was the first to navigate the tight little course and before 6 minutes had ticked past one swimmer had already touched the sand.

To get the jump on the field when the swim is so short requires acceleration, speed and experience. Brent Foster has these three attributes in bucket loads; literally decades of racing the world’s best swimmers will do that for you. Trailing him by 15 seconds was Lee Greer and Sam Franklin then there was another break of 10 seconds before Michael Poole lead in an elongated posse including Liam Scopes clocking 6 minutes 27 seconds and Sam Morreau with a 6 minutes 39 second time.

As the men disappeared on their 5 kilometre run towards Mission Bay the hooter sounded for the women’s field to start. Reigning Series Champion Simone Ackermann didn’t have any international swim stars to chase around the cans so she did the leading and was first back into transition recording a time of 7 minutes 11 seconds. Simone was at the head of a long, long line of swimmers intent on hunting her down.

The five kilometre run involves a couple of kilometres to the first turn at Mission Bay, then returns to St Heliers with a second turn cone to be negotiated before the punishing sprint up the beach to finish.

The men’s field were all chasing swim leader Brent Foster however they had no more luck out on the pavement as no inroads were made at all and Fozzie ran home a comfortable winner in what is likely his least favoured mix of distances.

Liam Scopes loves the long run and was too strong for all the guys he started the run with and claimed the valuable second place. His best Stroke & Stride result ever got Sam Morreau on the podium and in the prize money and his own personal swag of those prized points. Next in was Sam Franklin just holding out Cameron Burstall who was also celebrating his best ever result.

The form runner this summer has been Carmel Hanly and the 5 kilometre distance is her bread and butter so no huge surprise when she runs in for her second victory of the season. Simone Ackermann secures second place holding out Amy Wilkinson having a fine debut race.

The top five is competed by Georgia Lloyd and Amelia Watkinson both big improvers recording their own personal Stroke & Stride best ever result.

When there are just two races to go you want to have your hand well and truly up if you hope to be crowned the Series Champion. Right now past and multiple times champs Brent Foster and Carmel Hanly are doing just that with healthy leads in their quest to regain those titles.

Also needing to finish with a flourish and currently fighting over that final podium spot are Maddie Dillon, Teresa Adam and Georgia Lloyd.