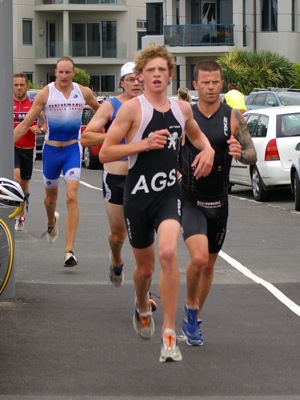 Twenty years ago this week the world’s first ever Stroke & Stride event was held in Auckland New Zealand.

The promising young athlete that everyone chased home that day went onto win another eight races and remarkably is still going strong now as one of the world’s best and this countries most durable and celebrated multisport athletes.

The Stroke & Stride got a lot bigger over the decades and is now the most popular and competitive after work sports event in New Zealand while the swimrun format has gone international with races now held in cities around the globe.

Sadly the waterfront beach where all this took place didn’t prove so enduring and is no longer with us; thankfully there are a couple of other splendid venues for us to utilise in later years

The first event of 2010 in the 2XU Stroke & Stride Series was held at photogenic St Heliers Bay. Conditions were typical for an Auckland afternoon; southwest breeze to keep the temperature down and enough cloud around for the sun to hide behind most of the day.

This race was a repeat of the distances from the December event. The men’s field started first this time and midway through the 1000 metre swim leg a pair of swimmers had got the jump on the chasing posse that they extended over the final leg. Perennial swim leader Brent Foster was the first to stand up however the younger and less experienced Cameron Todd was stuck like glue to him and they stayed close through transition and out onto the run course. Lee Greer was the next into transition but had given up 25 seconds to the leaders while everyone else was 40 seconds plus in arrears.

The sedate sea state was next disrupted by the women’s field as their flailing of arms circumnavigated the big triangular course. It was Teresa Adam out first in 13 minutes 26 seconds that gave her a 20 second over Tanya Dromgool and a talented field with the likes of previous Stroke & Stride winners Simone Ackermann and Jo Lawn to the fore.

The run is only three kilometres and takes the runners out to the end of Kohimarama before the fast trip back to the finish on the beach at St Heliers. By the time our leading men came back into view with half a kilometre to go nothing much had changed; Brent Foster and Cameron Todd were still locked together and no one else was in sight. Then just when they ran past the transition in front of the crowd of spectators it was Cameron Todd who kicked away to open up a decisive gap. He held this advantage to the finish to record a superb first ever Stroke & Stride victory and defeat the mighty Brent Foster who was relegated to second on this occasion. Callum Millward is another athlete turning in a fantastic performance running through for his best ever result grabbing the final podium spot. Sam Franklin came in 4th overtaking Lee Greer who claimed 5th place.

Holding the lead heading out onto the run was familiar ground for Teresa Adam; still leading after rounding the turn cone and closing on the finish line was a whole new ball game however she looked to be doing it in style. Teresa Adam has been dominating the swims at the Stroke & Stride for the past few summers and while her run has steadily improved it has never been quite good enough to hold on for the win. Well 2010 is going to change that as Teresa Adam takes the first win of the new decade and her first ever Stroke & Stride victory. Likewise Maddie Dillon records her best ever result taking the silver ahead of the renowned Jo Lawn. A little further back in 4th it is Tanya Dromgool who got home ahead of reigning champ Simone Ackermann.

At the halfway point in the Series, the Grand Prix points speak for themselves. As it has always been at the Stroke & Stride it is consistency that decides the Champions. Right now reigning champ Simone Ackermann has built a 12 point lead over her challengers. Likewise fourteen time champ Brent Foster is also 12 points up on all the other guys. The business end of the summer and the next four events will see who steps up and reveal the final standings.