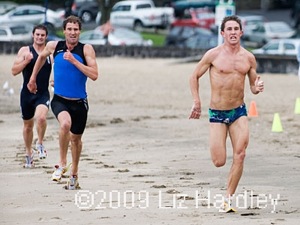 It would be being charitable and also highly accurate to describe the spring weather in Auckland as changeable. The forecast for Race #2 in the 2XU Stroke & Stride Series was extreme with three figure wind speeds, thunder storms and downpours all lining up to unleash on those considering a day at the beach. In the preceding hours we did indeed get hefty doses of the undesirable stuff however by race time conditions could not have been better.

The swim was over 750 metres of placid water with the earlier rollicking seas now settled completely. This calm sea state encouraged all the men’s field to move pretty much as one around the buoys and it was only on the return to the shore that a trio of guys pulled clear. They were Brent Foster going 8 minutes 34 seconds, Dylan McNeice 8minutes 37 seconds and Sam Franklin 8 minutes 51 seconds. What came next in a time of 9 minutes 15 seconds was more like a swarm than a pack as umpteen swimmers hit the beach and hurdled towards the transition removing goggles and shedding wetsuits on the fly; we’ll have to assume all the remaining contenders were mixed in with this lot.

The 4 kilometre run took the action out as far as St Heliers Bay before returning to the finish on the soft sands of Mission Bay. There may have been a slight tailwind to be enjoyed at times on the outward journey. Dylan McNeice and Brent Foster were hard charging at the front of the field doing their utmost to deal to each other and at the same time working together to prevent any of the fleet footed chasers catching them. By the time they rounded the point and came back into view, two had become three as the flying Ryan Sissons had once again accelerated up to the lead on the run leg. Positioning for the final drive to the finish line would be critical as there was 100 metres of soft sand to be negotiated before the line was crossed. An enthralling three way sprint finish ensued with Ryan Sissons getting clear and holding his form to the line to claim his second win for the season, Brent Foster’s vast experience got himself into second just ahead of the hard working Dylan McNeice. The strong running Liam Scopes secured fourth spot ahead of ahead of a delighted Michael Poole in his first race of the summer.

The swim was all she wrote for Teresa Adam as she left it to Samantha Warriner, Simone Ackermann and Carmel Hanly to take charge out on the run course. Samantha Warriner grabbed an early lead and Carmel Hanly got in front of Simone Ackermann but as they closed on the beach it was still anyone’s race with no more than a couple of metres of separation. All three athletes have stellar records at Stroke & Stride with numerous wins and Series Championships over the years. On this occasion it was to be Samantha Warriner who claimed her 23rd Stroke & Stride victory with one of her closest finishes in years. Simone Ackermann counterpunched and got herself into second and the winner from Race #1 Carmel Hanly was this time left in third. Behind this high quality podium came the juniors with Maddie Dillon holding out Stroke & Stride debutant Emily Pearce.

Grand Prix points are very close for the women with just one point the difference between Carmel Hanly and Simone Ackermann. Looking slightly ominous for the guys however with defending Series Champ Ryan Sissons already 8 points clear but stay tuned as we still have six more races to be swum and run.