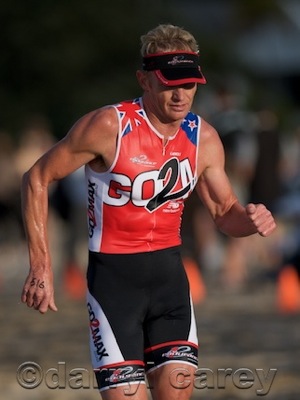 With the Stroke & Stride blowing out twenty-one candles this season the party held at Mission Bay for Race #1 attracted a multitude of competitors. Of course with all those years of tradition to fall back on the party involved some swimming and running in the 2XU sponsored event. Five hundred metres of swimming to be precise; which is a great distance to get your toes wet at the very start of the summer.

The women’s field lead the way and early on Teresa Adam was doing her darnedest at the head of the field to spread out the competition and gain maximum advantage before they hit the shore. By swim’s end and a time of 6 minutes 22 seconds she had managed to eke out a 12 second lead but was still in sight of the current series champion Simone Ackermann and the previous series champion Carmel Hanly as they negotiated their way through the transition area.

The men’s field had the opportunity to observe the women’s circumnavigation of the swim course and despite the tide ripping into the harbour and the wind charging out there appeared to be little effect on the lines held. Therefore the lead men looked to be engaged in some serious gamesmanship as they purposely veered off course at times in a bid to throw off their pursuers and gain an edge on their trip around the cans. The master of this game is always going to be the indomitable Brent Foster and he was rewarded with a 5 minute 49 second swim split giving him a 10 second lead over second placed Sam Franklin, 17 seconds up on Andrew Curtayne and more than half a minute ahead of fleet-footed Liam Scopes and Ryan Sissons.

Five kilometres of run was the next course for our intrepid contestants that took them from spectacular Mission Bay down past scenic Kohimarama Beach to the turn cone in the centre of picturesque St Heliers Bay. And it was all fun on the way out with the seascape to enjoy and the tailwind nudging you along. This part of the event was all Carmel Hanly, our three time series champion wreaked havoc out on the run as she strode to the lead and then to a most convincing 60 second plus victory. Simone Ackermann’s second best swim and second best run combined to give her second across the line. Teresa Adam dropped just two spots over the 5 kilometres to secure that valuable third podium spot. Maddie Dillon and Belinda Harper were never more than a few metres apart the whole day and rounded out the top five.

Last season Ryan Sissons unleashed blistering runs to conquer all and secure his first Stroke & Stride championship. The new season hasn’t started any different as he backs a strong swim with a once again superior run split to move clear of his competition and gain maximum points from round one. Liam Scopes couldn’t match his victory in the opening round last year but was still good enough for the silver this time ahead of swim leader Brent Foster. Sam Frankin backed his quick swim with an equally impressive run to head home Sam Morreau.

The top three places in the Series Grand Prix has familiar names already established so we will watch with interest if anyone new can unseat this experience over the next seven events over the five months of summer.