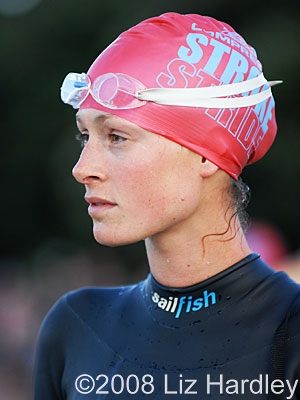 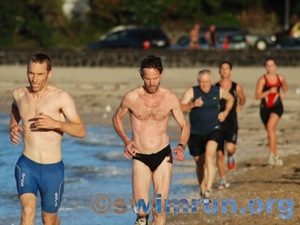 2XU Compression Stroke & Stride Race #7 is the last chance for competitors to consolidate their points before the decisive finale in a fortnight’s time.  With 35 knots of breeze forecast we were fortunate that the majority of the swim course was conducted within the shelter offered by Mission Bay as it was looking like a wild ride further out on the harbour.  Stroke & Stride swimmers had only to deal with a stiff wind from astern on the middle leg of their 750 metre journey.

The women’s field lead off and by the half way point a solo swimmer had gone clear with an already substantial lead over the rest.  Just 9 minutes and 40 seconds after the gun Teresa Adam was back on the beach having killed the swim and holding a whopping 40 seconds of advantage over her pursuers that were led in by Simone Ackermann and Lena Brunkhorst with names such as Anna Elvery, Michaela Guy, a sans wetsuit Risa Kusunoki and Maddie Dillon holding placings close to the front.

Ten minutes after the women it was the men’s turn for their burst around the cans however this time there was no one swimmer going off the front.  It was again Brent Foster leading the way into shore however a minor navigation error may have cost him some time as he and Lee Greer hit the beach just slipping under the 9 minute mark but only 10 seconds ahead of the chasers with James Upton prominent.  Ryan Sissons 9 minute 27 second swim saw him handily placed as they headed out on the 5 kilometre run.

The earlier mentioned wind may not have wreaked havoc on the swim but our run following the exposed waterfront as far as St Heliers before returning has morphed itself into a couple of kilometers of downhill followed by what feels like an uphill slog back to the finish.  This run that looked flat but felt anything but must have suited our visitor from Germany.  Lena Brunkhorst first dropped Simone Ackermann and then caught and passed Teresa Adam to run home a convincing winner of her first ever Stroke & Stride.  We can’t say we are surprised as she was on target for a win today backing up from her 3rd place and 2nd place in the previous two events.  Teresa Adam returns from her little mid-season sojourn to secure a fine second place with a run that was almost as good as her swim.  Series leader Simone Ackermann’s third place is actually her worst result of the summer.  You couldn’t call it a case of the speed-wobbles; more a pause for breath before her assault on the final coming up next.  Risa Kusunoki from Japan has a most excellent debut and finished in fourth place ahead of Tanya Dromgool with another top result for the summer.

The men’s race also ended up with a runaway winner and this result was almost expected as Ryan Sissons had used his lethal pace out on the road to already score two victories this summer.  On this occasion he ran out of transition with a handful of guys and half a minute between himself and the lead.  Five kilometers was always going to be too much for the others to defend and Ryan runs home with victory number three in the bag.  The shock came in second position with Brent Foster grabbing silver 15 seconds back.  It is not news that Fozzie lands another podium finish at the Stroke & Stride; it is just that many were expecting him to have his feet up resting on his laurels at the moment.  Sorry, resting is for mere mortals, not for the umpteen-time Stroke & Stride champ.  A few seconds further back and snaring the bronze position with his best result ever is young Michael Poole who seems to prefer his runs long and tough.  James Upton and Alex Smith battled for the next two places with only six seconds between them at the finish.

The Series Grand Prix is to decide the Stroke & Stride Champions for the season by awarding points through the eight race Series.  Athletes can accumulate points from their best five results plus their points from the Series final on March 25.  This season there is a vast difference in how the men’s field and women’s field go down to the wire in the Grand Prix competition.

Simone Ackermann has got it all over her competition and has all but won the Series already.  Realistically all she has to do is stay healthy and turn up at Race #8 and show similar form to what she has displayed with aplomb over the entire summer and the title of Stroke & Stride Champion is hers.  Should you be looking for real long odds on a bet then the only athlete capable of challenging is Teresa Adam.  Your money will be much safer invested in a place bet as Teresa is a sure thing for the silver.  Maddie Dillon, Sarah Jack and Lena Brunkhorst have set themselves up for a momentous battle to decide the next three positions with just a three point spread going into the final.

Defending Series Champion Brent Foster captured the lead for the first time this season at the previous race however with his win today Ryan Sissons has quickly grabbed that lead back.  Only four points in it now as these two fine athletes bring their contrasting talents to the big showdown in a fortnight.  That one is far too hard to call.  Also impossible to discount James Upton and Liam Scopes with both athletes recording multiple wins and a fierce determination to finish high up in the season’s standings so watch this space.