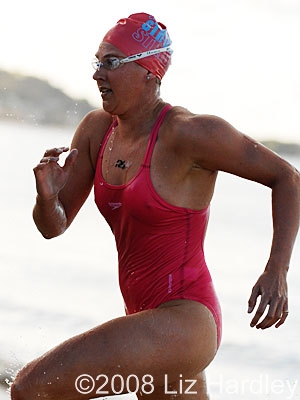 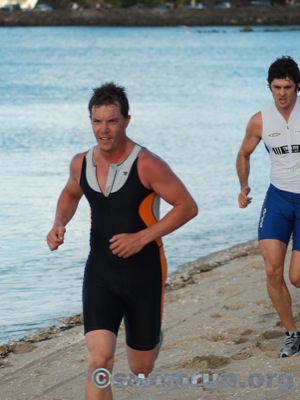 By the time Race #6 rolls around those that back their running prowess over anything they may lack in the swimming department are now in their element.  Never does the run get any longer or the swim any shorter than this edition of the 2XU Compression Stroke & Stride Series.  Plus by late February if the weather gods are playing the game the sea conditions should be sparkling and unruffled by any errant winds that can disrupt our late afternoons in Auckland.

With millpond like conditions the swollen men’s field hit the water ready to circumnavigate the shortest swim on the Stroke & Stride calendar.  Five hundred metres is never going to provide much separation even with Brent Foster at the head of the field with his foot on the accelerator doing his best to stretch them out.  Just 5 minutes and 43 seconds after the gun Brent was back on the beach with Lee Greer in close proximity.  And then as the clock closed on 6 minutes James Upton and the next pursuers arrived and soon a trickle turned into a flow and then a flood as clumps of three, six, ten or even more men hit the beach simultaneously and charged up the sand into transition.  Mixed in within this mass was Liam Scopes recording 6 minutes 19 seconds for his swim.

The women’s field had a grandstand view and could watch all this action unfold and maybe pick up some tips before they embarked on their swim.  However with no wind, no waves and no current to contend with it was very much a case of starting fast, swimming straight and not touching the brakes until your hand hit the sand.  The first to stand up at the end of the swim leg recording 6 minutes and 52 seconds was none other than legendary Joanna Lawn.  Jo is legendary not only for tearing up far longer swim courses all round the world every year but also because in this same race nine years ago she had swum and run her way to her first and only Stroke & Stride victory to date.  Current Series leader Simone Ackermann wasn’t about to give any old hands too much of a start and she was locked onto Jo’s shoulder in second place just a second behind.  Germany’s Lena Brunkhorst wasn’t far off the pace and this signaled the start of a continuous stream of a couple of hundred female competitors exiting the water, transitioning and quickly departing for their run around the waterfront.

The out and back 5 kilometre run takes competitors as far as St Heliers and like the swim, conditions were made for speed – the question was now who has the most speed?  Despite giving away half a minute to the faster swimmers Liam Scopes was taking no prisoners out on the road as he ran his way through the field.  On the approach to Mission Bay he even got past the dogged Brent Foster to claim the lead.  So running up the beach Liam Scopes took the victory with a repeat of his breakthrough result from Race #1 back in November.  Unlike that first race it was Brent Foster claiming second and Hawke Horstmann having his best result ever grabbing third place just ahead of James Upton and Lee Greer.

Over on the women’s side the degree of change is not so great.  Simone Ackermann had won Race #1, she then went on to win Race #2, Race #3, Race #5 and now she was putting in the fastest run of the day to take victory in this event. With a magnificent debut Lena Brunkhorst was close a fortnight earlier and close again today improving one place to take second ahead of distance queen Joanna Lawn who held out fleet-footed Kimberley Burke and Fiona Eagles.

The maximum score an athlete can accumulate after six events is 100 points and three quarters into Simone Ackermann’s outstanding summer she deservedly has those 100 points in the bank.  Her lead is looking all but unassailable so we’ll see what Teresa Adam and her cohorts can come up with to stall her march towards the title over the final month of racing.

Defending Series Champion Brent Foster has now climbed into the lead for the first time this season however Ryan Sissons has the next two events to chip away at that lead and perhaps do the unthinkable and topple our perennial champion.  These two will also need to be mindful with the talented James Upton and Liam Scopes currently lurking just few points adrift.