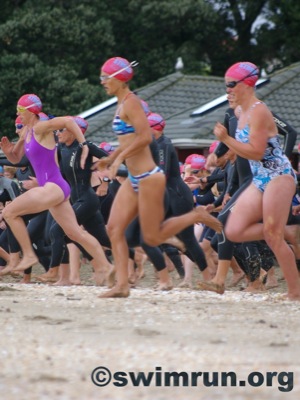 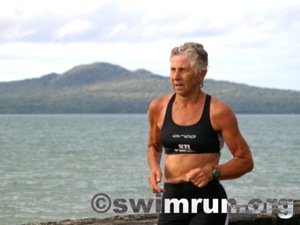 The fifth event in the 2XU Compression Stroke & Stride saw the Series shift to the wide-open spaces of Mission Bay for the first time this summer.  The other change of note was that perhaps our quota of blue sky days was used up in the first half of the season as today it was marauding dark clouds and patchy drizzle that confronted competitors as they made their way down to the beach.  However by the time of the race start it had lightened considerably and there was even the occasional burst of sunshine to remind us that we are in the middle of summer.

Auckland’s high temperatures and through the roof humidity made the harbour even more inviting than usual for an afternoon dip and the large women’s field were quickly into their work as they negotiated their way through the 750 metre swim.  Very little wind meant the swim conditions were rather benign with only an occasional sloppy chop to contend with on the back of the course.  This may have helped a sizeable group stay together at the head of field finally being lead into the beach by Rebecca Clarke in 10 minutes 15 seconds.  Hot on her toes came Germany’s Lena Brunkhorst and Whangarei’s Simone Ackermann with Tanya Dromgool, Anna Elvery and Sophie Corbidge also in touch.

The men’s field don’t get the luxury of pacing themselves during their swim leg as we can always count on one guy smacking it and going like a bat out of hell at the front.  For the umpteenth time in his career Brent Foster was leading the field and touching the sand in a smoking 8 minutes 38 seconds.  As the clock ticked over to 9 minutes the chasers arrived with Jersey’s Daniel Halksworth, Germany’s Hauke Horstmann and local lads Cameron Todd, James Upton, Ryan Sissons and Alex Smith all to the fore.

The 4 kilometre run was an out and back past the tree lined Kohimarama Bay with the turn at the corner of St Heliers Bay.  Runners could revel in the slight following wind for the first half and then in some cases pay the price when the apparently stronger head wind confronts them for the return.  When the leading women rounded the point and cme back into view with 400 metres to run it was now down to a three horse race with only a small hankie needed to cover our leading trio.  Inside the final 100 metres they move from pavement to sand underfoot and here Simone Ackermann made her push for victory and achieves a couple of metres break ahead of Sophie Corbidge and Lena Brunkhorst.  With all three sprinting down the beach they held these places to the line and Simone Ackermann collects her remarkable fourth victory for the season.  Sophie and Lena have got to pleased to get a top three finish in their first up race of the summer as was Tanya Dromgool recording her best finish ever crossing next and heading home Anna Elvery.

The men’s field were spotting Brent Foster half a minute heading out for their sprint around the bays and for anyone to overcome that handicap they would need to be on fire for the 4 kilometres. Turns out our victor from Race #2 Ryan Sissons was undeniably an incendiary device this afternoon as he scorched his way through the field and past our swim leader to repeat his victory over this mix of distances.  Brent Foster was deprived of the win but not by much while Daniel Halksworth’s best ever result got him the bronze ahead of James Upton and Hauke Horstmann.