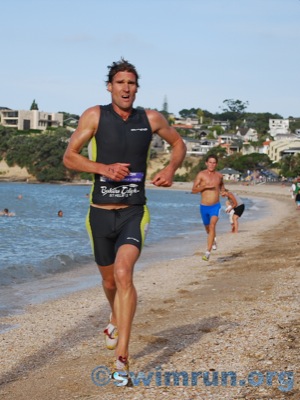 The weather forecast told us to expect a delicious summer’s afternoon and they got that exactly correct for our first event of 2009.  The fourth race in the 2XU Compression Stroke & Stride was a repeat of the distances from the previous race six weeks earlier, the conditions were once again very favourable and a couple of athletes were endeavouring to repeat their wins.

The 1000 metre swim was around the big triangle with the final leg parallel to the beach giving the spectators a ringside seat for the aquatic action.  The indomitable Brent Foster was as usual leading the way but what wasn’t usual was that he had company for the entire swim.  At the half way point there was a large group steaming towards the second can with this pack progressively disintegrating the further they got into the swim.  Hitting the beach in a time of 11 minutes 50 seconds Brent Foster had the lead but his advantage over William Curtayne was only a body length.  On the other side of 12 minutes followed the remnants of the aforementioned group with the likes of Andrew Curtayne, Mark Bowstead, Cameron Todd, Alex Smith, Ryan Sissons, James Upton, Sam Franklin and Stefan Talbot prominent.

Ten minutes after the guys started some very fast women were away and chasing them down.  Once again there was to be no one going off on their own and breaking clear of the field.  Teresa Adam, Samantha Warriner and Simone Ackermann made up the flying trio that were setting the pace and these three raced into transition with a time of 13 minutes and change.  The clock had ticked over 14 minutes before the pursuers including Rebecca Clarke and Jacqui Seebold made the beach.

The twenty-one year old Curtayne brothers have been doing Stroke & Stride races for most of their teenage years.  This season it appeared they were coming of age as they were getting closer and closer to winning one of these things or as a kiwi would say ‘knocking the buggar off’.  Setting out on the 3 kilometre run to Kohimarama and return William Curtayne was the best placed he’d ever been and it was just the small matter of slipping clear of Brent Foster before the real estate ran out.  With 400 metres to run William had achieved that magic 10 second advantage and he defended this to the line as he crossed for a delighted first ever Stroke & Stride victory.  Not often Brent Foster has to settle for the silver but this was one of those occasions and he also had Ryan Sissons breathing down his neck just three seconds back.  Andrew Curtayne and Cameron Todd both had fine races and were rewarded with a top five finish.

Simone Ackermann had gone three for three at the start of the season and was showing no sign of weakness.  However for this race she was up against Samantha Warriner and Samantha is one of only two female athletes to have recorded more than 20 Stroke & Stride wins.  We were even having trouble remembering the last time she had raced and didn’t run home the victor.  At the end of swim heading off onto the run there was nothing in it with just metres separating Simone, Samantha and Teresa Adam.  A couple of kilometres of running changed all that as Samantha Warriner demonstrated exactly why she is one of the world’s premier swimrun athletes on any stage with another comprehensive victory on the Auckland waterfront.  Simone Ackermann was certainly not disgraced being bumped into second in this company and likewise Teresa Adam would be well pleased with how close she was in third place.  Jacqui Seebold had one of the faster runs of the day grabbing fourth ahead of the dynamic Maddie Dillon.

At the half way point in the Series the Grand Prix points could be described as interesting, anyone placing bets on the final outcome might chose a different adjective.  Four races and four different guys have scored a win.  As of now the seasoned Brent Foster holds a 2 point advantage over the raw talent of Ryan Sissons with consistent James Upton 3 points adrift and the noteworthy William Curtayne only another point behind.  On the other side of the ledger it’s a little bit easier to decipher with Simone Ackermann and Teresa Adam breaking clear of the pack but there is still plenty of races to come and a number of athletes threatening for a podium finish.