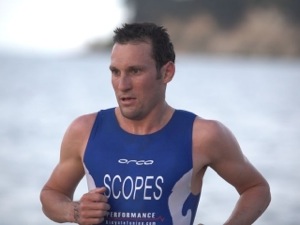 Auckland’s spring weather was even on its best behaviour laying on a positively summer’s day with a light balmy onshore breeze and loads of sunshine.  The women’s field was the first to get underway making short work of the 500 metre swim and soon returning to the shore.  Super swimmer Teresa Adam still managed to jump away from her chasers and had close to half a minutes lead as she ran through transition and out onto the run.  A steady stream of runners soon turned into a flood as hundreds of women headed off onto the run course in dogged pursuit.

Meanwhile back on the beach it was the men’s field lined up on the water’s edge awaiting their start.  With the hooter sounding they were off for their sprint around the cans with perennial Series Champion and swim course lead navigator Brent Foster again showing the way.  Following Brent into the beach was a host of contenders including James Upton and Lee Greer but it was all action with very little separation as they headed out onto the pavement.

When the women’s field ran back into view Simone Ackermann had taken charge and was now leading going into the final kilometre.  Simone has done a few years apprenticeship and had been improving steadily until now she was the fastest woman racing.  As she ran down to the finish line to take the win it was her rock-solid swim backed by the fastest run split of the day that propelled her to her first ever Stroke & Stride victory.  Teresa Adam has worked hard in her off season and showed that improvement today to take a comfortable second and her best ever result.  It didn’t stop there because in third place was Sarah Jack, then Maddie Dillon and then Jo Carrel with just seconds between them.  Out top five overall all had the race of their lives, all recording their best ever result.

The five kilometre run goes out as far as Mission Bay before returning to St Heliers for a second turn and then the finish along the beach.  No one likes this run more than Liam Scopes and he has carved up this course on countless occasions recording fastest run splits but never has he won the damned thing.  Sure he’s had plenty of 2nd and 3rd placings but there’s always been someone still in front of him at the finish.  Heading out for the run at this race he was giving away a full 60 seconds to the front of the field but on this day of firsts perhaps it would also be Liam’s day.  Immediately into his work he was soon picking off the faster swimmers until he had no one left to chase as he found himself in the lead and now there was no way anyone would prise this position from him.  Liam Scopes was rewarded for his years of perseverance with a comfortable victory in the opening round of the season.  James Upton got closest in second and stayed ahead James Bowstead and the flying teenage duo of Sam Franklin and Michael Poole.

So Simone Ackermann wins a race that has been around longer than she has and Liam Scopes wins a race that he’s been so close to winning for ten years.  Their reward is a headstart on all their competition in the battle for the Series Grand Prix and the coveted title of Stroke & Stride Champion.