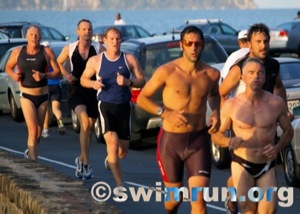 After one hundred and thirty-four days of one of the best summers in memory we return to Mission Bay for the eighth race and final Stroke & Stride of the season.  Back at the start of the Series defending champions Carmel Hanly and Brent Foster appeared perhaps vulnerable with a host of challengers from the younger set firing early shots.  However as the season progressed it was experience that came to the fore and once again it proved crucial to not only hold form right through those hot summer months but also to hold some ammo in reserve for the big races at season’s end.

They don’t get bigger than Race #8 in the Reesby & Company sponsored Series as this event also decides the New Zealand swimrun title for 2008.  Fittingly the women’s field was strengthened further with the addition of past New Zealand swimrun champions and Stroke & Stride Series Champions Samantha Warriner and Evelyn Williamson.

The men’s field was first to start the 1000 metre swim in idyllic conditions with only the lightest of zephyrs tickling the waterfront.  Half a dozen guys had the rare treat of leading Brent Foster around the first buoy after an uncharacteristic miscalculation on the start line.  Whether this treat ended up being palatable was found out in the second half as Brent Foster surged past the leaders and they were forced to up the tempo, dig deep and endeavour to hang on.  So with 11 minutes and 21 seconds on the clock Brent Foster hits the beach running and heads into transition with a select bunch including Dylan McNeice, Terenzo Bozzone and Tony Dodds hot on his heels.  Another 20 seconds later sees Will Green, Andrew Curtayne and Lee Greer sprinting to catch up.  James Elvery and James Upton both have some work do with the clock showing 12 minutes plus by the time they get to shore.

Samantha Warriner might have missed the past two seasons however she certainly doesn’t look to have lost her touch as she deals to the regulars on the swim to record a time of 12 minutes 41 seconds with Teresa Adam the only swimmer in contact as they regain the beach.  Kirsty Wannan also dips under the 13 minutes for her swim.  Jenny Cooper, Evelyn Williamson, Simone Ackermann and Carmel Hanly are in the top 10 but now struggling to keep the leader in sight.

Out on the run course down to the turn cone at St Heliers Bay was where Brent Foster displayed just why he remains the benchmark for swimrun competition.  His uncompromising toughness, his race acumen, pace judgment and ability to control a race are supreme and that’s because of and despite his 16 years of domination at the Stroke & Stride.  Showing us once again just how it’s done he runs home a winner sealing victory for this race, the New Zealand title and the Series Championship.

Tony Dodds has been the nearest to toppling Fozzie this season and for the finale he again pushes the hardest and secures the second placing as reward.  Saving his best for last Andrew Curtayne grabs the remaining podium position with his best ever Stroke & Stride result.  James Elvery was the only athlete to match Brent Foster’s run time but started too far back to catch the lead three coming home in fourth just ahead of Dylan McNeice.

Samantha Warriner was turning the race into a procession and gave no athlete a chance to challenge her lead with a blistering run spit to back up her convincing swim.  Her return to Stroke & Stride couldn’t have been more resounding as she takes the top spot and the New Zealand swimrun title for a third time.  The second fastest run of the day propels Carmel Hanly into second place for this race comfortably ahead of her rivals.  Simone Ackermann’s season continues to sparkle with a fine third place in front of Evelyn Williamson and Kirsty Wannan.

Way, way back in 1993 Brent Foster won his first Stroke & Stride Series.  Now in 2008 at the end of another season he’s again getting his name engraved on that cup and looking to be as dominant as ever with his five victories.  His closest challenger over the summer was Tony Dodds racing in his debut year and recording two victories along the way so we’ll watch this space.  James Elvery was the only other male athlete to record a victory and in doing so finished in third for the Series.  Liam Scopes (2nd, 2nd, 8th, 5th & 3rd) had his customary stellar season and achieved fourth staying in front of Will Green (6th, 6th, 4th, 7th & 4th), Ryan Sissons (4th, 13th, 4th, 4th, 6th & 8th), Dylan McNeice (5th, 13th, 4th, 5th, 6th & 5th) and James Upton (3rd, 5th, 7th, 8th & 6th).

Creating her own dynasty is Series Champion Carmel Hanly with her taking the title for the third year in a row.  We need to again go back to 1993 when the great Megan Robertson last achieved that triple feat.  Carmel’s excellence had her winning half the races this season on the way to retaining her title.  Simone Ackermann enjoyed her best summer ever and her consistency was rewarded with an outstanding second for the Series.  Third place in the Stroke & Stride Series is a dramatic result for anyone; when you’re a young as Kirsty Wannan it is just astounding.  Returning to the fray for this season rewards Julia Scopes (2nd, 4th, 6th, 4th, 5th & 8th) with fourth place closely followed by the talented Sophie Corbidge (1st, 3rd, 1st & 6th), Teresa Adam (5th, 5th, 5th, 6th, 3rd & 9th), Renée Holtom (5th, 13th, 12th, 8th, 4th & 13th) and Jacqui Seebold (3rd, 6th, 7th & 10th).