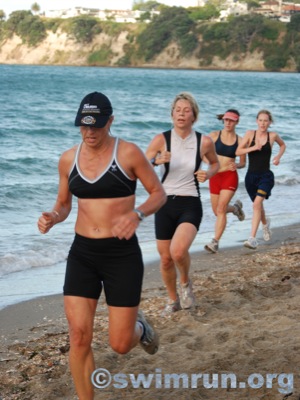 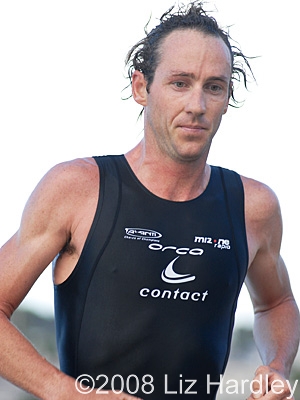 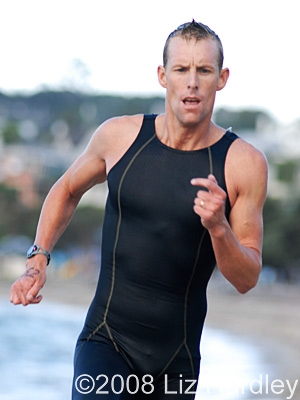 Race #6 in the Reesby & Company sponsored Stroke & Stride Series is one for the runners with the juicy five kilometre run to decide things.  However this is Auckland and it is a Stroke & Stride so despite the engorged high pressure system sitting all over the country we get served up a gusty onshore wind and chopped up sea state on race afternoon.  Therefore what should really be just a pesky little 500 metre swim to dispense with before getting into the meaty run leg turns out to be a challenging dash around the cans.  Speed, power and navigation all vital to ensure that time is not lost in the first segment of the race.

The men were first to start and after punching their way out to the half way point the front of the field was still tightly bunched as one swimmer started to nose ahead.  The third leg into the beach was definitely the fastest as now that gusting wind and messy chop was all from astern giving a downhill effect to those in the right place to catch a wave.  Brent Foster loves this stuff and excels in putting his body in the right place at the right time to catch every advantage out there, enough advantage to give him a 10 second lead over Dylan McNeice who is certainly no slouch either on the water.  A further 10 seconds back came the start of a near on continuous stream of swimmers exiting the sea as the clock now ticked over the 6 minute mark with Will Green, Bevan Docherty and James Elvery prominent at the front.

Kirsty Wannan and Teresa Adam are making a habit of leading out the women during the swim and these testing conditions were also to their liking as they went under 7 minutes for the half kilometre ahead of hundreds of women in the vast chasing pack.  Jo Lawn had returned to the beach for her annual outing clocking 7 minutes 7 seconds for her swim, Carmel Hanly clocked 7 minutes 25 seconds and Simone Ackermann 7 minutes 28 seconds.

That balmy little breeze was recording gusts of 20 knots around the exposed waterfront run taking competitors as far as Mission Bay.  Going from a tailwind on the way out to a headwind all the way back to St Heliers didn’t encourage too many to negative split the run.  The one athlete who looked to be excelling in these conditions was the flying James Elvery as he moved clear of the field and closed on the finish line.  James Elvery ended up taking a comfortable victory in style.  However he’s had to work for it; this is the first time he has won a Stroke & Stride in four years.  The runner up spot goes to indomitable Brent Foster and that was hard fought as well with the classy Bevan Docherty breathing down his neck over the final few hundred metres finishing just two seconds in arrears.  Ryan Sissons repeats his fourth place from a fortnight ago and Liam Scopes improves to score the fifth spot.

Once the women’s field got onto the road for their run leg it was quickly apparent that there was only one athlete in it.  Defending Series Champion Carmel Hanly was simply running faster than everyone else.  The small deficit she had exiting the water was soon erased as she ran through to the front of the field and ultimately through to the finish to score back to back wins.  Five kilometers may be long for Stroke & Stride but it was not long enough for Jo Lawn, this didn’t stop her getting up into second, her best finish for a good eight years.  Kirsty Wannan races with experience beyond her years and again turns in a solid race for the remaining podium position staying in front of Simone Ackermann and Julia Scopes.

The Series Grand Prix can now be likened to a game of high stakes poker as our players attempt to draw better cards or in this case points in the latter rounds to improve their hand.  The difference is that unlike poker there’s not a lot of luck involved in winning the Stroke & Stride Series.  More comparable to a prolonged battle with skirmishes at regular intervals and grit, determination and the ability to defy attrition necessary to prevail.  The absolute master of the game has been and continues to be Brent Foster (1st, 1st, 1st, 2nd & 2nd) as he now closes on another title with his 20 point lead.  Locked together in 2nd equal are presently Tony Dodds (1st, 2nd, 2nd & 1st) and James Elvery (5th, 4th, 3rd, 3rd & 1st).  The remainder of the money is currently with Liam Scopes on 60 points, Will Green 50 points, Dylan McNeice 48 points, James Upton 43 points and Ryan Sissons 42 points.

Race #6 is where Carmel Hanly (1st, 2nd, 4th, 1st & 1st) displayed her dominance and must move into favourite to retain her title for what would be an outstanding third year.  The last time a three-peat was achieved in the competitive women’s field was in the early 1990’s.  The closest and perhaps only challenger would now be Kirsty Wannan (4th, 3rd, 3rd, 2nd & 3rd) 15 points adrift.  A resurgent Julia Scopes (2nd, 4th, 6th, 4th & 5th) holds a 2 point advantage over Simone Ackermann (2nd, 2nd, 3rd & 4th) followed by Sophie Corbidge on 55 points, Teresa Adam 52 points, Belinda Harper 36 points and Jacqui Seebold 34 points.