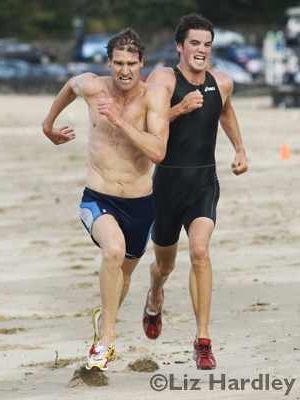 The first race of the New Year rode into town on the back of tropical cyclone Funa.  Fortunately Funa had departed Auckland before the evening start time leaving us with just a boisterous wind blowing down the harbour perpendicular to the Mission Bay coastline.  After the atrocious earlier conditions we were more than happy with a breeze and a large helping of summer sun for the fourth Reesby & Company sponsored Stroke & Stride.  The 1000 metre swim course was set in such a way that it was as close to user friendly as possible missing out any legs head-on into the aforementioned breeze and the accompanying one metre chop.

Once out on the road the 3 kilometre out and back run to Kohimarama presented competitors with a swift, almost downhill first half with the wind at their backs.  Then the hard work started with the wind in your face all the way back along the exposed waterfront to the finish line.

It was the men’s field starting first and from the shore could be observed a wide spread of men closing simultaneously on the first turn buoy, then some order was apparent as they continued around the course with a group of three at the head of the field.  On the final leg into the shore one swimmer broke away from his companions hitting the sand first in a time of 11 minutes and 12 seconds and if you guessed that it was the aquatic wonder Brent Foster then you’re absolutely right.  A dozen seconds further back came Dylan McNeice and Tony Dodds and then there was more than 20 seconds ticked over on the clock before the big chasing bunch commenced their arrival back on the beach.

Meanwhile ten minutes later in the second wave containing the women’s field it was Kirsty Wannan and Teresa Adam leading the way having broken free from their pursuers after their kilometer in the sea.  Clocking 13 minutes 15 seconds for the swim and more than 50 metres ahead of the rest they made short work of the transition and were soon onto the run.

Tony Dodds dug deep on the early stages of the run to bridge the gap up to Brent Foster and be challenging for the lead as they came back into view 500 metres from the finish.  They were still shoulder-to-shoulder when they launched themselves onto the sand for the final punishing sprint.  As the crowd goes wild Brent Foster finds another gear and gets his head in front to take the win by the smallest of margins.  Tony Dodds is denied his second win of the summer by just a second however still banks valuable points.  Clark Ellice returns to Stroke & Stride with a notable third placing getting ahead of Dylan McNeice out on the run course with Andrew Curtayne claiming fifth place.

The mix of distances in this event is biased towards the swimmers however for the women’s field it was a blistering run leg that made the difference.  At the end of the swim Sophie Corbidge was handily placed but not threatening the lead.  Three kilometers of running later and Sophie Corbidge had blown past all in front of her to claim a repeat of her victory from the season opener.  Simone Ackermann matched her result from Race #2 with another fine second place today finishing seconds ahead of current series leader Kirsty Wannan.  Defending Series Champion Carmel Hanly garner more crucial points in the defence of her title with fourth place ahead of the ever-improving Teresa Adam in fifth.

Half way through the eight race Series we have a run away leader in front of the men’s field while it is starting to look like a traffic jam at the head of the women’s event.  Sophie Corbidge has a whole one point advantage over Kirsty Wannan with Carmel Hanly looming just a few points further back.