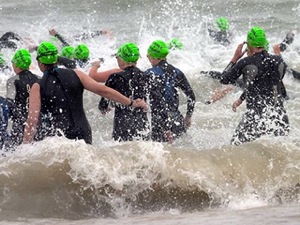 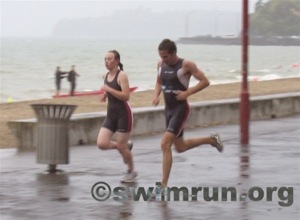 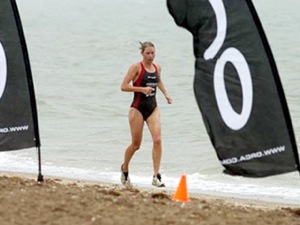 Nobody wants to miss the final Stroke & Stride of 2007 and that includes the low-pressure system that rushed down from the tropics to join the fun at Mission Bay.  So while hundreds of Stroke & Stride competitors lined up on the beach for the start they faced head on into a very brisk breeze and stared into the teeth of the advancing squall who’s arrival coincided precisely with the blast of the start horn.

The four hundred metres out to the first can was plain hard work punching through the one to two metre chop with navigation crucial, as straying off course in these conditions would be very costly.  Nicky Samuels was having her first start for the season however she happily went to the front of the women’s field and led the way recording the time of 14 minutes 15 seconds for the undulating 1000 metre swim.

With the thick low cloud, persistent precipitation, sea spray and failing light the visibility wasn’t optimum however all the faster male and female swimmers held good lines around the swim course.  The master of these punishing conditions is always Brent Foster and he didn’t appear to be slowed much at all recording 11 minutes and 47 seconds for his swim and most importantly gaining more than ten seconds of lead over the closest of his pursuers.

The first half of the run was over in no time with the breeze propelling all towards the turn cone, the price was paid in the second half as it was a hard slog into the wind and horizontal rain all the way back.  There’s only 3 kilometres of running in this event and even if it was longer it may not have made any difference as Nicky Samuels backed up her lead from the water with the day’s fastest run split to record a resounding victory, her first first in nearly three years.  Defending Series Champion Carmel Hanly won a fortnight ago but this time had to settle for second place.  Kirsty Wannan is having her best season ever and confirmed that with her best place ever finishing in third just ahead of Nicola McKay and Teresa Adam.

It’s déjà vu time.  This event is our traditional pre-Christmas outing and while Santa visits every 12 months without fail there is one other occurrence that can be relied on at this time of year.  We’re talking about Brent Foster winning the December Stroke & Stride, something he has done every year since 1992.  So while we may have been amazed to see Fozzie running down the beach to victory this time, we were not surprised to see him bank his second win of the season.  At race number one it was South Island based Tony Dodds triumphant and here he was returning to the Stroke & Stride for a fine second place.  James Elvery’s flying run got him onto the podium heading home Will Green and James Upton.

Currently leading the overall Series Grand Prix are Kirsty Wannan and Brent Foster.  Brent has been in this position on countless occasions, over many, many years.  Possibly more years than young Kirsty has been alive.

We now break for seven weeks and when we resume we’ll see if the experience of Brent Foster can hold off the agile Liam Scopes, James Elvery, Tony Dodds, Will Green, Lee Greer and James Upton in their charge for the top spot.