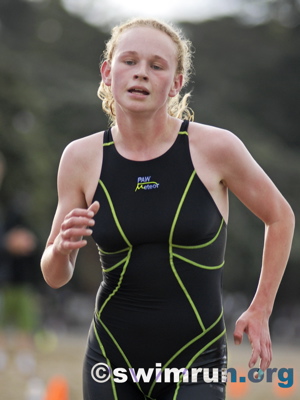 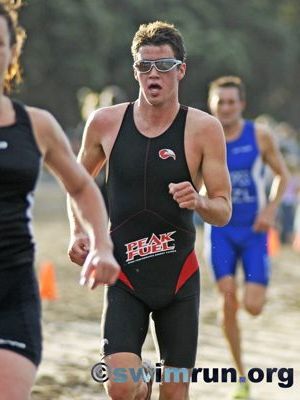 With exquisite timing summer arrived in Auckland just hours before the start of the Stroke & Stride swimrun season.  After three days of rain and cool temperatures it was a welcome relief for the precipitation to finally clear, the sun to appear and to savor a gorgeous late afternoon down at the beach.  The throngs of competitors could now relax as they registered and then lined up for the start ready to blow out all those accumulated winter cobwebs.  A real treat to be had was the total absence of that afternoon wind which nearly always makes it’s blustery presence felt close to the shore when these events take place.  It is not often the Waitemata harbour does an impression of the world’s largest swimming pool however without a ripple in sight the 500 metre swim looked to be all downhill.

First to start in Race #1 of the Reesby & Company sponsored Stroke & Stride was the large women’s field and just 6 minutes and 22 seconds later it was Kirsty Wannan emerging from the water with a useful 10 second lead back to Jessica Parr and Teresa Adam.  Jade Shearstone and Julia Scopes were also at the sharp end of the field and then started a continuous stream of hundreds of swimmers touching the shore and running through to the transition area.

Ten minutes later it was the men’s turn to race around the buoys and living legend Brent Foster of course led the way with a time of 5 minutes and 40 seconds.  Only seconds behind him came Tony Dodds who had gained a small separation from the massive chasing pack spearheaded by the likes of Will Green and James Upton and also containing the dangerous Liam Scopes timed at 6 minutes 14 seconds.

It’s not every race that the Stroke & Stride utilises Mission Bay as a venue and it was the first time ever the athletes got to navigate the route out to Okahu Bay and return for their 5 kilometre run.  Coincidentally it was also the first time ever that 16 year old Sophie Corbidge had entered a Stroke & Stride.  Handily placed at the end of the swim leg and once out on the run she simply accelerated past and away from all her competition.  This awesome running prowess rewarded Sophie Corbidge with a convincing victory in her debut Stroke & Stride – watch this space folks.  When the dust had settled after Sophie’s blazing run it was Julia Scopes the best of the challengers coming home in second place.  Julia has been quiet in recent years but some of you may remember her winning the season opener six years ago so another to watch this season.  Jacqui Seebold continues her fine form from last summer and grabs the final podium spot while swim leader Kirsty Wannan stays clear of Renee Holtom as they round out the top five.

In the early stages of the run it was a study of contrasts at the head of the men’s field.  On your left you had Brent Foster – local institution, started in close to one hundred Stroke & Strides and the winner of more than half of those starts.  On your right you have Tony Dodds – half the age and doing his first ever event having traveled up to the big smoke from the South Island.  These two had matched each other stroke for stroke during the swim and then resumed the battle out on the road.  This time it was the younger legs of Tony Dodds that prevailed as he moved ahead and assumed the lead.  However a lot can happen in five kilometres and for Tony the finish line couldn’t come fast enough as soon breathing down his neck was Liam Scopes on the back of the fastest run of the day.  At the finish line Tony Dodds proved that experience wasn’t everything, sometimes raw talent and blinding speed will get you the victory.  Liam Scopes finished just 4 seconds later with only another few seconds back to the valiant Brent Foster as he mounts yet one more defense of ‘his’ title.  Ryan Sissons also packed a punch with his outstanding run to get home in fourth staying in front of James Elvery and a host of other gun athletes.

Long, long way to go in the Grand Prix right now however this season is showing all the signs of being one of the most exciting ever.  Eight events over the next five months and we’ll know which two athletes will be the Stroke & Stride champions for 2008.