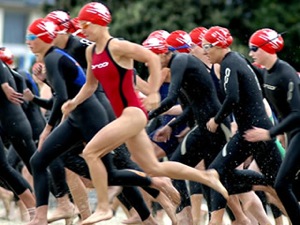 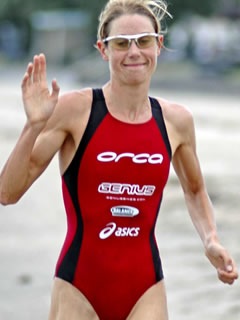 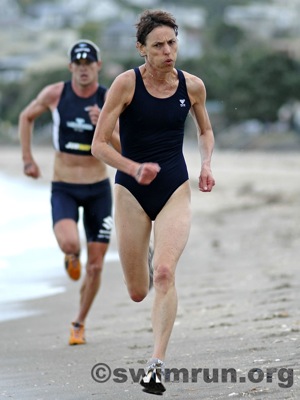 The business end of the season is when the going gets tough as competitors strive to gain an advantage over their opponents.  For the penultimate event of the season in the Structured Finance sponsored Stroke & Stride Series that toughness was upped a further notch with the stiff little onshore wind that came to play in Auckland for the afternoon.  So with the threat of rain that never materialized, overcast skies, a chopped up sea that got more messy the further offshore one ventured and then a blustery exposed run course there was plenty of fun to be had for the hardy competitors that either didn’t want to or couldn’t afford to miss this race.

The first 350 metre of the swim course was a hard slog out to the first can followed by a quick zip across the back and then a relatively easy ride home so long as you pointed yourself in the right direction.  There’s nothing wrong with Nathalie Bernard’s navigation and no one can match her speed in the water so again the result was a handy lead for herself when she touched the beach recording 10 minutes and 12 seconds for the 750 metre swim course.  Twenty seconds later the chasers started arriving with notable names such as Jenny Cooper 10m 40s, Carmel Hanly 10m 42s, Debbie Tanner 10m 43s, Simone Ackermann 10m 50s, Jacqui Seebold 10m 59s and Anna Hamilton 11m 14s spread amongst them.

Current Series leader Brent Foster’s had a smile a mile wide when he looked over the swim course as these conditions were made to order for someone with his open water prowess.  He was still smiling 9 minutes and 4 seconds later as he sprang from waves and ran up to the transition with a 25 second lead now in the bank.  Just as well he wasn’t looking back as the sight of Kris Gemmell coming out in second may not have been high on his request list.  Also in the hunt were Lee Greer, Sam Walker, Andrew Mackay, Andrew Curtayne and James Elvery.

There was 5 kilometres of real estate between the end of the swim and the race finish and just about all of that was exposed to the wind, some of it at your back, some of it on the nose.  Isn’t it great the way a tailwind can be hardly noticeable whereas a headwind can make you feel you’re trying to run with the handbrake on.  Carmel Hanly used all this to her advantage as she steadily moved towards the head of the women’s field and then left them in her dust as she accelerated to her fourth victory for this season.  One who looked like she could match Carmel on the run was Anna Hamilton however she couldn’t close the half minute gap; she was rewarded with her best finish of the season crossing the line in second.  Simone Ackermann’s steady progression through the summer got her up onto the podium this time holding out Jacqui Seebold and Nathalie Bernard.

In Brent Foster and Kris Gemmell we have two of the best swimrun athletes in the world.  The difference is that while Foster has won close to half of the Stroke & Stride events ever held, Gemmell has never scored a win at a Stroke & Stride.  All that was about to change as immediately after he launched himself onto the run Kris Gemmell was running like the wind and he soon caught and blew past the valiant Fozzie.  Kris Gemmell was never going to be challenged then and ran home for his first ever Stroke & Stride victory.  Brent Foster added a second place to his string of firsts for this season while James Elvery was a clear-cut third place.  Sam Walker grabbed fourth just ahead of the flying Ryan Sissons with both these guys having their best results for the summer.

The Series Grand Prix will be decided in a fortnight at Race #8, the season finale with points from this event added to the best five other results of the season.  Defending Series Champion Carmel Hanly has made a determined defence of her title to date and currently leads Gina Ferguson by just 8 points.  Scoring a great second place today has moved third placed Anna Hamilton 10 points clear of Nathalie Bernard.  Meanwhile Elizabeth Orchard, Jacqui Seebold, Simone Ackermann and Kirsty Wannan look set to battle over the remaining four places and finish in the money.  However that’s if Marisa Carter and Jenny Cooper don’t gatecrash their party.

It’s not over till its over although the men’s field chasing Brent Foster this season might argue that point as he has now amassed a total of 97 points.  The only athlete in sight on the horizon is now James Elvery with 79 points who has moved clear of Blair Jordan and Liam Scopes.  Once again the race for the final money places is close with Sam Walker, Ryan Sissons, James Upton and Lee Greer handily placed to share the spoils.  Challenges could still come from William Curtayne and Ben Logan in the last event.