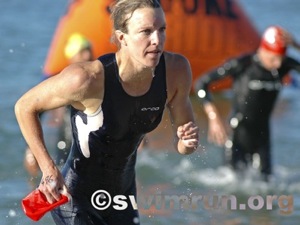 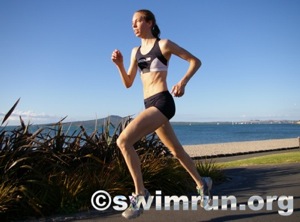 The sixth event in the Structured Finance sponsored Stroke & Stride Series is raced over a 500 metre swim in front of a 5 kilometre run.  This mix of distances means an athlete is spending only around 30 percent of their race in the water and then the balance out on the road making for a very run oriented event.  However that doesn’t mean a renowned runner will be triumphant as running after a short but very hard and fast swim makes for a whole new ball game.

Once again this season the conditions were supreme and this allowed the swim course to be set with a deep-water start at the western end of the beach and then a drag race straight along the beach to the swim buoy set just in front of the transition area.  It was the men’s turn to start first and immediately out of the blocks was the hard charging Brent Foster as he gave it maximum throttle to gain any edge he could on this little swim.  Five minutes and 51 seconds later he was back on the sand and heading into transition with a useful 12 second lead over the strung out posse in pursuit.  Would a dozen seconds be enough with the likes of recognised runners Liam Scopes, Blair Jordan, James Elvery, James Upton plus Andrew and William Curtayne on the hunt?

Nathalie Bernard is making a habit of leading the women’s field around the cans and into transition.  The drag race style course didn’t disrupt her continuing this practice as she scorched alongside the beach emerging from the swim in 6 minutes 44 seconds.  Hot on her heels and just 4 seconds later saw Debbie Tanner charging up the steps to her running shoes.  Jenny Cooper was the only other swimmer inside of 7 minutes with then a stream of athletes hitting the shore including Gina Ferguson recording 7 minutes 5 seconds and Carmel Hanly 7 minutes 11 seconds.

The five kilometre run includes two turnarounds so plenty of opportunity to see who’s in front and who’s behind.  Brent Foster gave away nothing to his challengers in the early stages of the run and going inside the final kilometre as they ran past transition he still held the lead with James Elvery dangerously close behind.  Around the final turn cone and back to the finish on the beach Brent Foster had once again repelled all the attacks and crossed the line victorious, his fourth victory of the summer.  James Elvery came tantalizingly close to snatching the win but had to settle for second place seven seconds back.  Liam Scopes nailed down third spot a whole one second in front of Blair Jordan with James Upton taking fifth.

It has been twelve months since Debbie Tanner raced a Stroke & Stride however she hasn’t been sitting at home with her feet up.  The Stroke & Stride Champion from 1997 has been busy spending her time travelling and racking up some very impressive results on the world stage.  She brought all that imposing form with her to the beach today and looked very comfortable swimming with the best of them and then running away to record yet one more Stroke & Stride win, her ninth ever.  Defending Series Champion Carmel Hanly closed the gap in the final kilometres as she recorded a very handy second place nine seconds down.  Gina Ferguson ahead of Jo Lawn and Anna Hamilton took the remaining podium position.

The Series Grand Prix decides the Stroke & Stride Champions each season.  Some athletes have now done all six events this summer so expect a consolidation of points as we close in on the decisive final race in March.   Brent Foster is one to have gained points at all six starts and now sits on top of the mountain with 97 points in the bag as he closes in on his lucky thirteenth title.  A little further back there is the incredible tussle between James Elvery, Blair Jordan and Liam Scopes as they swap places race after race.

While Carmel Hanly didn’t get the win she wanted today she did finish ahead of Gina Ferguson, which allows her to extend her lead to five points.  There is also just five points between Anna Hamilton and Nathalie Bernard.