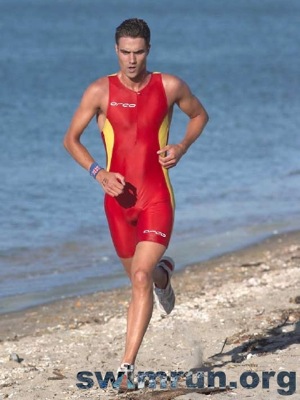 Every now and then Auckland gets an absolutely perfect day and we had just one of those days for the fifth event in the Structured Finance sponsored Stroke & Stride Series.  There was the brilliant sunshine, the balmy temperature, the merest hint of a breeze, the high tide filling up the sparkling Waitemata harbour, the all new golden sands of St Heliers Bay glowing and an abundance of entrants lined up and ready to enjoy their race.  Moving into this second half or business end of the season is when every race, every place, every second counts big time so from this point forward we look for an extremely spirited Series to tighten up even more.

The 750 metre swim looked to be as easy a 750 metre swim can be with no wind, hardly a ripple on the surface and none of those subversive currents to encourage you to wander off course.  These cakewalk like conditions are not what most of the really quick swimmers prefer as they are much more likely to extend their lead when there are adverse conditions to overcome out on the water.  The women were away first and again time trialling at the head of the field was Nathalie Bernard as she demonstrated once more that she is the form swimmer recording 9 minutes 47 seconds as she touched the shore.  There was then a 15 second break back to Kelly Bruce who was followed in quick succession by Gina Ferguson, Ying Jie Ow and Jenny Cooper.  This small bunch was the precursor for a continuous stream of competitors exiting the water and charging through transition over the next 10 minutes with notable names Carmel Hanly recording 10 minutes 44 seconds, Anna Hamilton 10 minutes 56 seconds and Elizabeth Orchard 11 minutes 43 seconds amongst them.

Coinciding with this rush out onto the pavement was the start of the men’s event which saw Brent Foster taking his own line out to the first buoy and in doing so getting a gap on all those now in his wake.  By the time he neared the beach at swim’s end his lead had extended to a good dozen or more metres with his final swim time recorded as 9 minutes flat.  All on his own in second 10 seconds in arrears was newcomer Graham O’Grady as he set out on the run in pursuit.  James Upton recorded 9 minutes 27 seconds and his arrival opened the floodgates as the possie of chasers then arrived in force.  Included in the horde were James Elvery 9 minutes 32 seconds, Ben Pulham and Ben Logan 9 minutes 33 seconds, Blair Jordan 9 minutes 43 seconds, Sam Walker 9 minutes 59 seconds and Liam Scopes clocking 10 minutes 2 seconds.

Defending Series Champion Carmel Hanly was making every stride count out on the road and she had soon erased her swim deficit and taken the lead, the only athlete showing any resistance as they came back into sight on the return to home was Gina Ferguson who doggedly tried to stay in contact with the flying Carmel.  Along the beach to finish line Carmel Hanly held her lead and crossed the line to take her third victory of the summer.  Gina Ferguson claimed second ahead of fast finishing Anna Hamilton.  Kelly Bruce had an awesome start to her season with an outstanding fourth place home while Elizabeth Orchard used every metre of those 4 kilometres to move up into fifth place.

Brent Foster was also ticking off the metres in rapid succession hoping that he’d inflicted enough hurt and damage out there on the water that his challengers wouldn’t have the resources to contest his slender lead.  Turns out his running was also his strength today and he ran home the winner for his third victory of this Series.  James Elvery took his game up a notch for this race running himself into second place, his highest finish of the season.  Debuting in style was Ben Pulham taking the other podium spot and all the accolades and rewards that go with that placing.  Just two seconds behind was James Upton who had found the form to take his best placing of the season and also holding out fleet-footed Blair Jordan

The points earned in this race have at least forced some separation amongst the top players in the woman’s field.  Her win in Race #5 has provided defending Series Champion Carmel Hanly a 3 point lead over Gina Ferguson and Anna Hamilton has now got herself 4 points in front of Nathalie Bernard.  Plenty here to hold our interest over the final 3 rounds.

Brent Foster earning himself another maximum 20 points today hasn’t made life any easier for the host of chasers whether they be chasing him in the swim, out on the run or in the ascension to the top of the points table.  Looks to be only daylight in second presently however just on the horizon there is a doozy of a battle being fought between Blair Jordan, Liam Scopes and James Elvery as they scramble to get themselves on the Grand Prix podium.