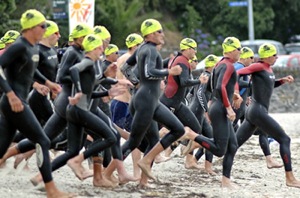 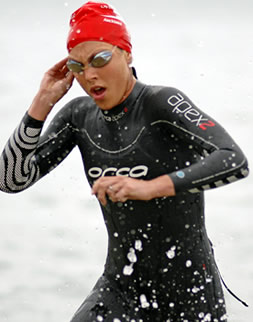 The first Stroke & Stride event of 2007 heralded the shift back to the traditional venue at St Heliers Bay now resplendent with many thousands of cubic metres of fresh, new sand.  The venue may have changed however the distances were a repeat of the previous event in early December and by the end of the evening a couple of athletes had scored back-to-back victories in the Structured Finance sponsored Series.

As befits the momentous return to the home of Stroke & Stride the weather conditions played their part with a day tailor made for super quick performances out on the course.   The Waitemata Harbour did its best impression of the world’s largest swimming pool for the 1000 metre swim with hardly a ripple in sight.  The men were the first away and leading all the way was Brent Foster as he gradually increased his lead over the chasers as they circumnavigated the big triangle.  Fozzie was back on dry land in less than 12 minutes, which gave him a 20 second lead over Lee Greer.  Then came a large strung out bunch that included William Curtayne, Will Green, James Upton, Andrew Mackay and Ben Logan however these chasers were more than half a minute back and counting from the leader.

The women’s field had their own flying swimmer to chase over the dead calm sea and it was Nathalie Bernard happy to lead them out and going on to record 12 minutes 53 seconds.  Next to arrive was Gina Ferguson in 13 minutes 6 seconds, Kirsty Wannan 13 minutes 35 seconds, Simone Ackermann 13 minutes 59 seconds, Belinda Harper 14 minutes, Marisa Carter 14 minutes 1 second, Anna Hamilton 14 minutes 26 seconds and Jacqui Seebold 14 minutes 28 seconds.

If anyone was going to catch Brent Foster they had only three kilometres to do it in and Brent knows this stretch of pavement out to the end of Kohimarama and back better than just about anyone.  Not too long after the men had sped out of the transition the first male runner was spotted returning to the beach and finish line and no surprises that it was indeed Brent Foster backing up from his win at the end of 2006 with a win at the start of 2007.  The big surprise on the night was who of the rest had attacked the run the hardest and pulled clear of the pack to take second place.  For the new year it was William Curtayne backing up his great swim with a sensational run leg and scoring his best ever Stroke & Stride result which had kept him clear of the classy Blair Jordan and James Upton, both past Stroke & Stride winners.  Will Green’s first race of the season scored him a valuable fifth placing.

At Race #3 Gina Ferguson had swum and run herself to her first ever Stroke & Stride title holding out defending Series Champ Carmel Hanly.  She didn’t have Carmel chasing her down today however she still had to head off early race leader Nathalie Bernard and hold out a number of fleet of foot runners if she was to match her December result.  This she did, looking completely relaxed and in control Gina Ferguson crossed the line in first place for her very own back-to-back victory.  Nathalie Bernard swims as a good as anyone and each event her overall result seems to improve, on this occasion she had her best ever Stroke & Stride coming home in second.  Making up the most ground on the run saw Anna Hamilton run herself into third spot.  Kirsty Wannan also improves with every outing this time getting up for fourth and heading home Jacqui Seebold.

The end of Race #4 marks half time in the Stroke & Stride Series so while the oranges are passed around we’ll assess the points in the Series Grand Prix.  It could not be closer in the women’s standings as right now we have current Series Champion Carmel Hanly tied on 57 points with challenger Gina Ferguson; each with two wins to their credit.  Then there is Anna Hamilton and Nathalie Bernard locked together on 43 points and only 4 points clear of Marisa Carter.  We won’t stop there as next in the queue are Elizabeth Orchard and Jacqui Seebold tied on 35 points.  We hope the second half proves a little more decisive for divvying up the prize money.

Who said ‘history never repeats’ – it sure looks to be happening here as for the umpteenth time we have the indomitable Brent Foster sitting atop the men’s standing with a healthy lead over all that would challenge him.  It’s only half way through the season and we can’t hear the singing yet however it will be of great interest to see which of those currently in Fozzie’s wake can get closest to him through the back half.  Currently Liam Scopes on 47 points is one whole point in front of Blair Jordan with James Elvery next in line as the men wrestle over who will finish in the top eight this summer.