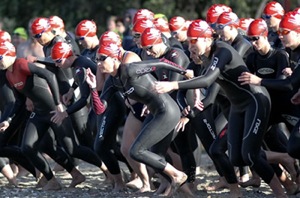 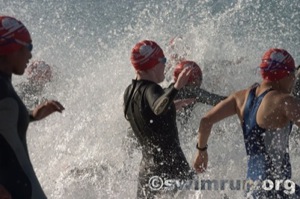 Race #3 is our traditional Christmas event held each December before taking a break over the New Year holidays.  There’s been a number of new names winning the early events this season yet if you were forced to pick a winner going into this race it is really not that hard to do.  That’s if you appreciate that a single athlete has won this event every season going right back to December 1992, that’s a heck of a long time and who would bet against that record?

A great thing about a having an event in the late afternoon is that when the day dawns with miserable weather there’s a whole twelve hours for it to improve before the race start.  Certainly this was the case for the third event in this season’s Structured Finance Stroke & Stride Series as each hour went by Auckland was rewarded with more sunshine, less wind and more warmth.  By the time the athletes lined up on the beach for the start of the 1000m swim the conditions were close to ideal.  What wind there was, was blowing directly offshore so it didn’t do much to chop up the swim course.

The women’s field started first and some of them must have been enjoying the conditions so much they took the long route out to the first turn buoy.  A couple of cans later at swim’s end it was Nathalie Bernard with the best navigation and a handy 10 second lead touching the shore in 13min 41sec.  Strung out behind our swim leader came Gina Ferguson, Rebecca Clarke, Marisa Carter, Carmel Hanly, Belinda Harper, Vanessa Palmer, Claire Edmonds and Anna Hamilton.

The leading men revelled in the excellent swimming conditions and it was a white hot pace at the head of the field.  12 minutes and 19 seconds after they started it was the customary figure of Brent Foster leading from the water.  He had just a handful of seconds advantage over Dylan McNeice and then Stephen Sheldrake with these three aquatic masters having broken clear from the rest of the men.

The 3 kilometre run takes you around the point and into Kohimarama, along the footpath under the pohutukawa blossoms to the turn cone, then back to Mission Bay and the finish on the beach.  Not a great deal of real estate there to make too much time up.  Gina Ferguson’s reason for running hard was twofold.  One, too get herself into the lead and two to hold onto that lead until she reached the finish line.  This she ended up doing with aplomb as she recorded the fastest run on the day coming home with a healthy lead to record her first ever victory in a Stroke & Stride.  Defending Series Champion Carmel Hanly had won the last four Stroke & Stride events but her streak was ended at this race though she still ran herself up into a valuable second place.  Another having her best Stroke & Stride result ever was our swim leader Nathalie Bernard as she backed up with a solid run to score a splendid podium finish ahead of Anna Hamilton and Jacqui Seebold.

Hanging with Brent Foster during the swim leg is never an easy task as has been demonstrated on countless occasions.  Trying to stay with this wily campaigner out on the first few kilometres of the run means stepping into a whole new world of hurt and has left many fine athletes shaking their heads.  He ran away from the field at Race #3 last season and the season before that and the season before, in fact Fozzie has made this December race his own for the past 15 years.  Now here he was again, 12 months later, 12 months older doing it all over again and notching up yet another Stroke & Stride win.  The race for second place was left to the out-of-town boys and at the finish it was Stephen Sheldrake managing to stay a few seconds clear of Dylan McNeice with then Ben Logan finishing just three seconds ahead of Blair Jordan who had won the season opener.

There was a three way tie for the men in the Series Grand Prix after Race #2.  Brent Foster’s win today looks to have blown his competition out of the water and he now holds a 10 point advantage over Liam Scopes.  Carmel Hanly certainly looks on track to successfully defend her title as she still enjoys a 20 point buffer over Gina Ferguson.