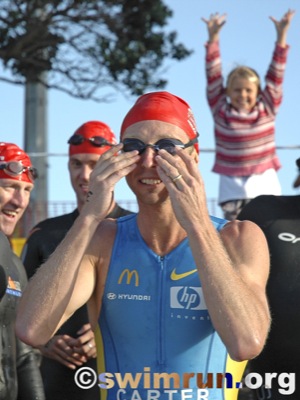 With the Stroke & Stride being a series of eight events lasting the whole summer, an athlete is required to manage their season so that their form is good for a long period.  Athletes are accustomed to building their season around peaking for a certain event and in an ideal world it would be just a matter of progressing through the months of November, December, January, February and March getting faster and closer to your best on each outing.  That is a lot easier said than done, as has been demonstrated on numerous occasions over the years with athletes starting the season on fire only to see their form desert them in the later rounds.  Of course, the tortoise and the hare scenario doesn’t really work either as if you’re giving away too much to your competition early on, then the chances of overhauling them in the back half of the season are dicey at best.  You don’t want to be relying on them to crash and burn in order to head them home.  Race #7 in the Structured Finance sponsored Stroke & Stride Series is where you need to be at your best to consolidate those strong performances already in the bank.

The women’s field has been a nightmare for the commentators and spectators to pick this season with the first six events having six different swimmers leading from the water.  Finally Rebecca Clarke demonstrates that she can repeat this feat as she leads them from the water in a time of 9 minutes 48 seconds presenting her with a handy 10 second lead over Rebecca Hooper.  Following the leading duo saw Carmel Hanly record 10 minutes 18 seconds with then Marisa Carter, Anna Elvery, Simone Ackermann, Belinda Harper, Vanessa Palmer and Anna Hamilton all inside 11 minutes.

Conditions for this event were most pleasant, lots of sunshine and a light offshore breeze giving plenty of sparkle to the Waitemata Harbour.  Probably not the conditions our defending champion Brent Foster would have ordered however he still managed to open up a lead on nearly all of the men’s field as he touched the beach in 8 minutes 50 seconds.  The exception was Shane Reed doggedly pursuing him all the way around the cans only 2 seconds in arrears.  Then there was a 20 second break back to James Upton who was in turn chased in by Hamish Carter, Liam Scopes, Dean Foster, Robert Baff, Thomas Hahn, Chris Panayiotou, Matt Burgess and Blair Jordan.

Exiting the transition athletes faced a 5 kilometre picturesque jaunt beside the sea out to Mission Bay and return.  The run course is really Carmel Hanly’s playground as she immediately went about overhauling the lead swimmers and then didn’t back off at all as she ran home for a resounding victory, her second of this season.  It was another celebrated runner that was next to appear as Anna Hamilton had also made good use of the 5 kilometres to move through into the runner up position.  Simone Ackermann claimed the other spot on the podium with here best ever Stroke & Stride result passing Anna Elvery as they ran up the beach.  A glorious 5th place finish went to the 1994 Stroke & Stride Champion, the delighted and fast-as-ever Marisa Carter.

Remember, as the men exited the water we had Brent Foster a couple of seconds ahead of Shane Reed, these 2 seconds evaporated in the transition as by the time they hit the pavement it was Shane Reed in front.  And that’s pretty much as it stayed as neither of this pair would give any quarter and 5 kilometres later Shane Reed took his fifth win of the season still just seconds in front of Brent Foster.  Liam Scopes couldn’t dent these guys’ lead but held off all the other men to take third place while it was young Matt Burgess turning more than a few heads as he came home in a fantastic fourth place with James Upton in fifth.

One race to go and the major players in the overall Series Grand Prix have just the all important Race #8 to add further points to their total.  Winning her second event of the season lifts Carmel Hanly into the top spot with now a healthy 7 point lead over the reigning Series Champ Samantha Warriner and another 7 points back to Anna Hamilton.  Shane Reed has recorded five wins this season and you can’t do much more than that, he’s rewarded with his 100 point total, 14 points clear of the men’s reigning Series Champ Brent Foster.  Certainly not out of the picture is James Upton on 80 points.  So will there be a couple of new names engraved on the Stroke & Stride cups this season?