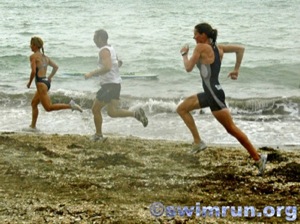 Normally, you wouldn’t be spending a day such as this at the beach.  There’s a host of far more inviting indoor pursuits to occupy your afternoons when the skies are thick with dark grey cloud, the wind is howling and squalls of rain are lashing anything outdoors.  However the 6th event in the Structured Finance sponsored Stroke & Stride is scheduled; forcing hundreds of ardent competitors out of their warm, dry and comfortable abodes and down to the beach at St Heliers Bay.  Also worth mentioning is that the blustering breeze is blowing directly onto the beach resulting in a good sized chop to mess up the swim course so that the harbour does it’s best impression of a washing machine.  Sounds delightful, though it is still summer so at least the water was warm during that swim; warmer than you’re likely to get battling that wind and rain out on the run.  The real heat on this day was to come later at the finish line with a couple of the closest finishes ever witnessed at the Stroke & Stride deciding the top placings.

The theme for this season seems to be for out-of-town athletes to show the locals the fastest way around the swim course.  It was no different on this occasion with Dylan McNeice leading the way through those turbulent waters and hitting the shore in an outstanding 5 minutes 41 seconds for the 500 metres.  This had him a body length up on Stroke & Stride Series Champion Brent Foster with another 5 seconds back to the New Zealand SWIMRUN Champion Shane Reed.  Only these three went under 6 minutes although soon after came the chasing throng with Ben Riley, James Upton, Sam Walker, Andrew Mackay and Liam Scopes foremost in the ranks.

Local lass Debbie Tanner wasn’t going to have anyone showing her around her own backyard and put her stamp on this event by leading from the water in a time of 6 minutes 31 seconds.  Her own posse filled with names such as Nicky Samuels, Rebecca Clarke, Jill Savege, Carmel Hanly, Marisa Carter and Anna Elvery chased her in just seconds later.

Anyone glancing at these top few swim times would think that these swim conditions can’t be that bad; those times aren’t slow at all.  The top athletes swim times are indeed as quick as ever which is a pointer to their superb power and fitness which allowed them to punch through those waves out to the first turn buoy without losing any forward momentum.  Then for the surf back into the beach it was all downhill as they utilise their speed and enjoyed the ride home.  However, for those not so aquatically blessed the ruggedness of for this little 500 metre swim can severely upset your race.  Most reported that even if it was hard going it was a lot of fun to be swimming in conditions that doesn’t typically draw you down to the beach.

Tamaki Drive was not at it’s beautiful best for the 5 kilometre run with visibility hampered and not a lot of shelter to be had from the weather.  Shane Reed doesn’t need a view or shelter when he’s racing and in a repeat of a fortnight ago he goes straight to the lead that he refuses to surrender and records his 4th victory of the season.  A little further back the experience of Brent Foster has got him ahead of Dylan McNeice however if this pair glance behind them they will see the threatening form of Liam Scopes closing down on them inside the final kilometre.  Very few can match strides with Liam Scopes and sure enough by the time they hit the finish straight he had moved into 2nd finishing just two seconds ahead of Brent Foster and then Dylan McNeice.  Sam Walker scored the valuable 5th place points.

Leading from start to finish is a strategy that has won a lot of Stroke & Stride events over the past 17 years and a tactic that Debbie Tanner has employed in her past seven victories.  All the way down to Mission Bay and back she ran doggedly at the head of the field.  Trailing in second place never more than a few metres back was Nicky Samuels until they hit the beach when Nicky opened up her sprint to draw level with Debbie Tanner as they lunged for the line.  Regrettably for Nicky Samuels those final couple of metres didn’t go to plan as she ended up crossing the finish line on her knees, succumbing to her extreme final effort or perhaps that bloody soft sand.  So Debbie Tanner ended up triumphant by the slimmest of margins.  If that was close then what do we make of Jill Savege and Carmel Hanly hurtling down the beach seconds later, weaving their way past the guys each straining to get ahead of the other.  Ultimately Jill Savege got the third however this could not have been closer with only centimetres in it as they flashed over the line.  Then it was Anna Hamilton’s turn to score the valuable 5th place points.

Samantha Warriner’s recent absence has seen her once commanding lead in the Series Grand Prix be whittled away so that now she leads by a precarious 3 points from Carmel Hanly with Anna Hamilton another 10 points further back.  Then it’s all on as a crowd of athletes try to cement their top 8 overall position.  Shane Reed has won all three races in 2006 and the reward is the massive 95 point total in the Grand Prix and a healthy 17 points clear of early season leader James Upton.  Brent Foster continues to play catch-up now up into 3rd place while second place today holds Liam Scopes in 4th.  Remember it’s Race #8 plus the best five other events to count so watch for the points to close up even more moving into the final two rounds.