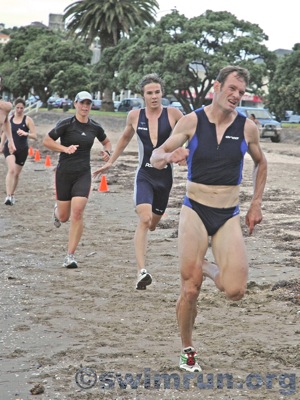 Moving into the second half of the SWIMRUN season each race becomes more crucial as we draw closer to the Series end.  This time the weather played it’s part as certainly the conditions could not have been better for an afternoon of competition on a summer’s day in Auckland city.  Everything was set for fast times on this track for the fifth event in the Structured Finance sponsored Stroke & Stride Series.

One would imagine that local knowledge would be advantageous to contestants during the swim however this season it has been out-of-town athletes more often than not showing the way down at St Heliers Bay.  This time it was the world class Canadian athlete Jill Savege that tore up the swim course showing that should you be talented enough and fast enough and you simply swim a straight line between the buoys, then there is no need to wait for anyone else.  At the end of the 750 metres of swimming she had opened up a 25 metre lead exiting the water in a time of 9 minutes and 18 seconds.  Doing their best to limit the damage behind came Jenny Cooper in 9 minutes 36 seconds, Carmel Hanly 9 minutes 49 seconds, Kirsty Whiting 9 minutes 55 seconds, Marisa Carter 9 minutes 57 seconds, Anna Elvery 9 minutes 58 seconds and buried in the bunch was Anna Hamilton recording 10 minutes 26 seconds.

Jill Savege continued to show the way on the picturesque 4 kilometre seaside run to Mission Bay and return.  The only athlete making any inroads on this lead looked to be Carmel Hanly who had closed down some of the initial half minute deficit however was still trailing as they came into view back at St Heliers.  Then perhaps the local knowledge did come into play or was it just that Carmel dug deep and found another gear as she suddenly pounced just before the turn onto the beach, took the lead and ran through the finish line to claim her debut Stroke & Stride victory.  Therefore after years and years of plying her trade, getting closer and closer to that ultimate top place, a delighted Carmel Hanly now joins the select group of Stroke & Stride winners.  After being in front for ninety-five percent of the race the gallant Jill Savege very nearly got the win at her first ever race but ended up second.  Anna Hamilton had one of the faster runs on the day to lift into third place while Jenny Cooper nailed down fourth place just ahead of Anna Elvery.

The men’s field were going to struggle to match the excitement of the women’s finish nevertheless were prepared to give it a shot as they too enjoyed the lightening fast conditions.  The usual suspect Brent Foster opened up proceedings with a scorching 8 minute 28 second swim out around the buoys however conditions were so amenable to swimming this time that he couldn’t drop Shane Reed who was just seconds back as the pair ran up the beach into transition.  Will Green was in third recording 8 minutes 45 seconds and then came an elongated chasing pack that held all the other likely names.

Out on their 4 kilometre run Shane Reed managed to slip past Brent Foster however when they returned into view in the final kilometre there was still only a few seconds in it and closing very rapidly on the leading pair was Sam Walker and Clark Ellice.  No one is going to beat home Shane Reed if he’s in front with the line in sight and so it proved as he ran in the winner to repeat his victory from a fortnight ago.  Brent Foster was also following the same script from the previous race as he repeated his second placing.  Sam Walker had his best finish of the season nabbing third ahead of Clark Ellice and these top four all crossed the line within 10 seconds of each other.  A little further back in fifth place was Will Green heading home a couple of internationals.

Carmel Hanly’s electrifying win sees her jump into second place on the Series Grand Prix, two points ahead of Anna Hamilton.  Unfortunately these two have to look a long way up the road to sight Series leader Samantha Warriner who still leads by an impressive 16 point margin.  The men’s Grand Prix is nowhere near as clearly defined.  Shane Reed’s back to back wins lifts him into the lead although only by a solitary point over the early pacesetter James Upton.  While a little further back the other spot on the podium is being fought over by Liam Scopes and Brent Foster with just 3 points separating them.