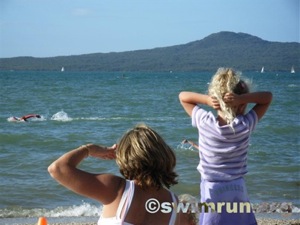 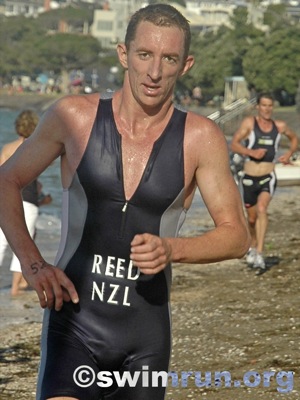 In early January most of Auckland is still enjoying their summer holidays, soaking up the sun at the host of beaches that frame the city.  Sunshine, warm water, hot temperatures; the bay down at St Heliers has all the ingredients for a relaxed day at the beach however the multitude that descended on the waterfront this late afternoon were also keen to throw some hot racing into the mix.  While Auckland relaxed, the first Stroke & Stride of 2006 and the 4th event in this season’s Structured Finance sponsored season was in town.

Apart from being too hot for swimming swathed in rubber and too hot for running at your fastest possible pace, the conditions couldn’t have been better to start the New Year with the lightest of onshore breezes just helping to make the Waitemata sparkle.  First to enjoy the balmy dip in the harbour was the men and after the flurry to the first buoy it was apparent that two swimmers were gradually pulling clear of the field.  This 1000 metre distance is the longest swim in the Series and made to order for perennial winner and defending Series Champ Brent Foster.  It is unusual for another swimmer to be able to hang with Fozzie during the swim however this time up he had company of Kurt Bassett out in front as they hit the beach in tandem recording 12 minutes 12 seconds.  While these two were transitioning Shane Reed finished his swim just 20 seconds in arrears followed by Will Green in 12 minutes 54 seconds, James Upton 13 minutes 5 seconds and Robbie Baff 13 minutes 30 seconds.  It’s an impressive sight to see around twenty athletes swimming very fast, in a very tight space, all reaching the shore at virtually the same time.  It might not be much fun actually swimming in the middle of that pack of flying arms and feet however that was what recorded 13 minutes 41 seconds and that was where all the other major players from this race would emerge from.

The women’s field spread out a little more for their jaunt around the buoys.  Their pace was no less frenetic with Nathalie Bernard leading the way recording a smoking 13 minute 33 seconds giving her a nine second lead out over Gina Ferguson.  Another 10 seconds back came Nicky Samuels closely followed by Samantha Warriner, Debbie Tanner and Rebecca Spence.

The little 3 kilometre run to Kohimarama and back doesn’t give much opportunity for the field to shuffle the placings though it is certainly not the time to relax and enjoy the view.  Brent Foster immediately put the hammer down at the head of the men’s field running clear of the chasers over the first two kilometres however he couldn’t break the elastic with which Shane Reed seemed to have ensnared him.  In the final third of the run Shane Reed drew inexorably closer before ultimately passing Brent Foster before the finish line and claiming his second victory of the season.  Brent Foster had to settle for a gallant second this time with both of these guys giving absolutely everything out on the course as they battled to the line.  Consistency is paying big dividends for James Upton this season scoring another podium spot ahead of the experienced Sam Walker and Clark Ellice both having their first outing of the season.

Looks like none of the women’s field made a New Year resolution to beat Samantha Warriner because like she did in the 3 events before Christmas our defending Series Champion and reigning New Zealand SWIMRUN Champ wins yet again clearly having stepped up a level for this summer.  This improvement sees her come out of the water at or very close to the front and then stamp her authority during the run coming home unchallenged for seemingly comfortable victories.  Nicky Samuels showed last season she has got what it takes to win a Stroke & Stride and for her first race of this season she goes very close claiming second place.  Debbie Tanner is never out of the money and this time comes home in third ahead of Gina Ferguson with Rebecca Spence having her best race of the season next home in fifth.

While the women’s field mix up the placings from race to race the one constant is Samantha Warriner at the head of the field snaring first places and maximum points every fortnight.  The effect this has on the Series Grand Prix is that now Sam has a whopping 33 point lead at the halfway point.  Doing their best to challenge or at least stay in touch sees Anna Hamilton with 47 points in second, Carmel Hanly on 44 points in third and Gina Ferguson on 43 points in fourth place.  The excitement may be to see which of these three can ultimately nail down the valuable runner-up position.  James Upton has 69 points after four events and a healthy 14 point lead over Shane Reed although with an athlete the calibre of Shane Reed chasing that lead could also be described as precarious.  There are still four events to sort that out while also in contention is Liam Scopes on 50 points.  And then who is going to write off Brent Foster at this point, currently sitting in fourth place with his 37 points?  He has never come from this far back to win the Series before however in the long history of Stroke & Stride he’s hardly ever let anyone else win a title either.  All this will become more clear when the second half of the season rolls out in a fortnight.