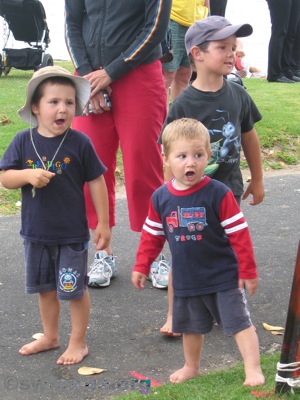 It came as a bit of a blow to some competitors as they arrived on the Auckland waterfront to see columns of whitecaps marching up the harbour with lines of waves breaking on the beaches.  We have had such a great run of good weather stretching back over the past couple of seasons it is easy to forget how testing conditions have been at times back through the years at the Stroke & Stride.  Auckland Harbour had a high wind warning broadcast for the day and while the Nor’easter was lots of fun for the wind-powered craft at play it was a cause of consternation for a number of the Stroke & Stride athletes.  Someone’s prayers may have been answered as by the time of the race start the wind strength and direction had altered leaving the waters at St Heliers Bay a lot more convivial than initial expectations.

Race #3 in the Structured Finance sponsored Finance Stroke & Stride Series called for the 1000 metre swim raced over a triangular course with the third leg parallel to the beach, this gives the crowd of spectators a close up look at the form of the swimmers.  The women’s field were first to start and it wasn’t long before they were strung out in a long line as they made their way round the course.  It was Rebecca Clarke leading the way recording 13 minutes and 10 seconds followed seconds later by Athens Olympian Rebecca Linton who had Samantha Warriner, Gina Ferguson and Debbie Tanner in tow.

As the female field was hitting the shore it was the turn of the men to depart on their triangular journey and early on it was apparent that one man had jumped away from the field.  By the second buoy this lead had gone out to half a minute and there was no giant surprise when it proved to be Brent Foster hitting the beach in a scintillating 11minutes 44 seconds.  For the next little while there was only daylight in second before it was the turn of Will Green to lead in the chasers recording 12 minutes 25 seconds with James Upton and Shane Reed close behind.

The 1997 Stroke & Stride Champion Debbie Tanner has had one of her slower starts for this season however this was soon being put to right out on the 3 kilometre run as she surged clear of the women’s field excepting for her New Zealand team mate Samantha Warriner.  Being the defending Stroke & Stride Champ, Samantha Warriner is doing her utmost to reclaim that title for a third season and her running away for a convincing win today means she can really do no more to instigate her campaign as she scores a perfect three from three.  Gina Ferguson chased home Debbie Tanner to claim the valuable third spot on the podium while Anna Hamilton got the upper hand over Anna Elvery out on the run course as they ran home for fourth and fifth.

James Upton, Shane Reed and Clark Ellice have shared the wins at the previous five Stroke Stride events between them.  The glaring omission from this illustrious list is the name of Brent Foster; you see Brent has made winning Stroke & Stride events something of a habit.  If you wanted to go back to the last time that five races had been run without Fozzie coming out on top in one of them you’d need to backtrack in time to 1992, some of our competitors weren’t even born then.  Another constant over all these years has been the Foster ‘style’ of winning which is simply to time trial the course, operating at maximum velocity at all times and wait for no one.  This style is successful now as it was 13 years ago.  Brent Foster extends his lead out on the run to come home the Stroke & Stride victor for the 55th time.  The big improver for this season remains James Upton as he burned off all the other chasers and recorded a very credible second place backing up his win a fortnight ago.  Shane Reed and Will Green were never separated by more than a metre or two the whole race until Shane unleashed a finishing kick a hundred metres from the line to take third, leaving Will with fourth and Liam Scopes in fifth.

The current standings in the Series Grand Prix sees contrasting points tables.  The women’s flied is lead by all conquering Samantha Warriner as she sits on the maximum 60 points with a substantial 19 point lead over Anna Hamilton (3rd, 4th & 4th) with Carmel Hanly a further 7 points in arrears.  Meanwhile the men’s field has had three different competitors taking a win resulting in James Upton (2nd, 1st & 2nd) atop the table on 54 points with a 13 point buffer on Liam Scopes (4th, 2nd & 5th).  Next best is Shane Reed with 35 points from his two scoring events.