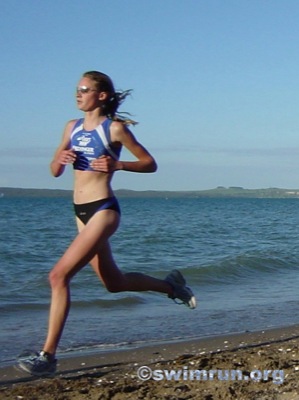 In recent times the Stroke & Stride has been dominated by three men who between them swept all eight events last summer.  Clark Ellice and Shane Reed scored a brace of wins apiece while the illustrious Brent Foster claimed the other four victories to seal his 12th Championship title.  A fortnight ago it was looking like business as usual when Shane Reed returned to notch up another win and extend his streak to three.  However for the second event in the Structured Finance Stroke & Stride Series results were going to have to change.  None of the aforementioned were in attendance leaving the door wide open for someone else to step up and make their mark in the Series.

A fine warm afternoon greeted contestants at St Heliers Bay and the high tide brought with it a north-westerly breeze.  While not particularly strong, this onshore wind direction always does it’s best to make the swim a lumpy affair bringing navigation skills to the fore.  The men started first and with just 9 minutes 36 seconds on the clock it was Will Green leading James Upton and a small bunch onto shore with all the other contenders strung out behind.  The run to Mission Bay was also headlong into the wind though on land it was less bothersome than out on the water.  Two weeks ago James Upton had the race of his life recording a superb second place, this time the result got even better as he surged to the lead early on, then withstood the frantic charge of Liam Scopes on the return to St Heliers.  Thus it is was James Upton celebrating his first ever Stroke & Stride victory on the finish line, behind Liam Scopes ran fast enough to almost snatch the victory arriving just five seconds in arrears.  Third place went to Ben Visser backing up his strong swim with a fine run leg.  Another making inroads on the run was James Elvery as he headed home early leader Will Green.  Less than 30 seconds separated the top five at the finish further emphasising that every second is critical at these events.

The women’s field were able to observe the men getting blown about during the swim, which provided them some clues as to which line to take.  The swimmer that had got her swim strategy exactly right was Gina Ferguson who decimated the rest of the field on her way to recording 10 minutes 21 seconds for the 750 metres.  It was left to the experienced Samantha Warriner to front the pursuit and limit the damage as she lead in the chasers now 30 seconds in arrears with Carmel Hanly and a host of others on her toes.  While there appears to be a clean out afoot at the head of the men’s field the same can’t be said for the women as last year’s Series Champion and reigning New Zealand SWIMRUN Champ Samantha Warriner shows no signs of taking a holiday just yet.  Once on dry land she set out to overhaul the swim leader and then fend off any charges as she ran home the winner giving her the perfect start with two from two this season.  Repeating her runner up position from the first race was Carmel Hanly setting herself up for a fine season as she consolidates her assault on the Series Championship.  Showing that while her swimming is sublime her run is not too shabby either was Gina Ferguson scoring an unheralded third place holding out Anna Hamilton and Kirsty Whiting over the 4 kilometres.

With twenty-five percent of the season done, the top of the points table makes interesting reading as the quest for the Stroke & Stride Championship develops.  Samantha Warriner again leads the women’s field doggedly tailed by Carmel Hanly with Anna Hamilton cementing herself in third place. James Upton’s splendid start to the season ensures he is atop the men’s field.  Applying the pressure is the talented trio of Liam Scopes, Ben Visser and James Elvery with only a handful of points the difference.