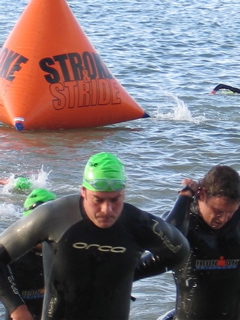 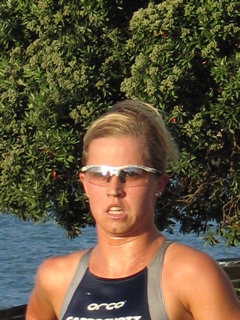 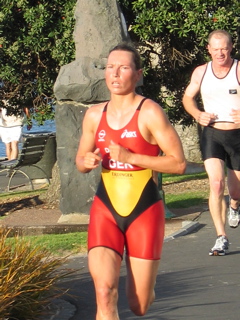 Race #8 is the final event in the Structured Finance sponsored Stroke & Stride Series and was once again held on a sparkling Auckland afternoon.  The sequence of great weather through this summer was unprecedented as not once this season have competitors endured a battering from winds or dampening from rain.  Summer how it should be.  With the weather being so temperate it was left to the competitors to create a storm as they battled for overall Series honours.  In the woman’s field it was looking like a major derailment in the form of Samantha Warriner would be necessary to deny her regaining the title of Series Champion however previous champions Debbie Tanner and Nicole Cope were ready to pounce at the first sign of speed wobbles while Carmel Hanly and Anja Dittmer were also happy to step up and spoil the party.  For the men it could not be much closer than the miniscule 2 point lead that defending Series Champion Brent Foster held over Clark Ellice.  And was that a crack of vulnerability revealed when our perennial champ was relegated to a fourth place finish at the previous event?

The 1000 metre swim around the big triangle was expected to be a major influence on the end results as too much time lost in the water can be near impossible to peg back on the subsequent 4 kilometre run.  Tension was high as the pumped up athletes in the men’s field lined the beach awaiting the start.  Once underway it was clearly visible after the first few hundred metres that a ‘couple’ had broken free from the field.  As this pair continued to move clear their relationship was perhaps not altogether harmonic.  Possibly it was to be an unrequited attraction, as one athlete’s fondness for another’s feet is not reciprocated.  At least that is the impression after 11min 46sec at the completion of the swim leg with Brent Foster leading out and upon realising he still had Shane Reed latched onto his toes.  As these two took off on their run the rest of men’s field streamed up the beach lead by Matthew Burbury-King 12min 18sec and then Dean Foster 12min 32sec, Ben Riley 12min 35sec, Daniel Lee 12min 38sec, Sam Walker 12min 39sec, Clark Ellice 12min 40sec, Thomas Hahn 12min 43sec, Kris Gemmell 12min 46sec, Steve Nicholls 13min 15sec and Liam Scopes 13min 24sec.

The 4 kilometre run headed into the setting sun before turning at Kohimarama for the return to St Heliers Bay.  On the outward journey Brent Foster and Shane Reed had a parting of the ways.  Brent Foster couldn’t keep the pace set by the fleet-footed Shane Reed however he was determined to stay as close as possible as this would aid him staying clear of the speed merchants looking to run him down.  On the finish line it was a repeat of Round #7 as Shane Reed takes another comfortable victory and the title of New Zealand Swimrun Champion for 2005.  Brent Foster ups his game from the previous fortnight and claims the treasured second spot ahead of Stroke & Stride debutant Kris Gemmell who set the run course on fire with the fastest run of the day earning him third.  Daniel Lee representing Hong Kong caps his fine season in New Zealand with fourth place.  And for the first time this season Clark Ellice isn’t finishing in first or second and has to settle for the unaccustomed fifth position.

After what looked like a sedate swim the women’s field had taken their gloves off for their run and some big punches were now being thrown.  Swinging hardest looked to be Samantha Warriner as she stormed to the head of the field running beneath her beloved Pohutukawas.  When you add the days fastest run split to a stellar swim then it should be an unstoppable combination and so it proved as Samantha Warriner sealed the victory and back-to-back New Zealand Swimrun titles.  Chasing hard all the way saw Debbie Tanner hold onto second place at the line ahead of Germany’s Anja Dittmer in third who couldn’t repeat her wins from Race #6 and #7.  Carmel Hanly capped her great season with another finish in the money in fourth place while Nicole Cope claimed the last of the prize money running home in fifth.

The Series Grand Prix is contested over the eight race Series with points from the final race and an athlete’s best five other performances to count to their overall total.  Samantha Warriner (1st, 1st, 1st, 2nd, 2nd & 1st) was clearly the strongest athlete through the long months of summer and is rewarded by regaining the Stroke & Stride Championship with her 114 point total.  Having her best season in recent years Debbie Tanner (5th, 2nd, 1st, 2nd, 4th & 2nd) on 95 points finished runner up ahead of the 88 points accrued by defending champion Nicole Cope (2nd, 2nd, 4th, 3rd, 3rd & 5th).  Consistency rewards Carmel Hanly (3rd, 4th, 4th, 4th, 3rd & 4th) with 82 points keeping her clear of the first international athlete Anja Dittmer (3rd, 1st, 1st & 3rd) who ended the Series in 5th place after very quickly coming to grips with the swimrun game.  In 6th place overall we had Vanessa Palmer while Anna Elvery and Kirsty Whiting rounded out the top eight.

Having a golden season and winning everything in sight, Clark Ellice (1st, 2nd, 2nd, 2nd, 1st & 5th) on 102 points mounted the strongest challenge yet for title of Series Champion but somehow ended up in second overall.  Winning the Stroke & Stride Series Championship for an incredible 12th year was once again Brent Foster (1st, 1st, 1st, 1st, 4th & 2nd), what more can we say about this indomitable athlete?  In third place on 74 points Sam Walker (4th, 5th, 3rd, 4th, 4th & 7th) was delighted with his summer, finally winning the close fought battle he’d been engaged in all season long with Liam Scopes (3rd, 3rd, 4th, 6th, 5th & 8th) who tied on 72 points with James Elvery (2nd, 4th, 3rd, 2nd & 6th).  Tom Hahn managed to hold onto 6th place and hold out the seriously quick Daniel Lee and Shane Reed who’d both created havoc in their inaugural Stroke & Stride seasons.