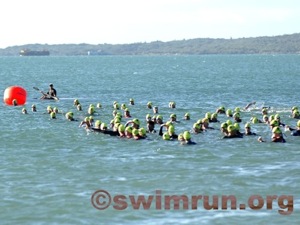 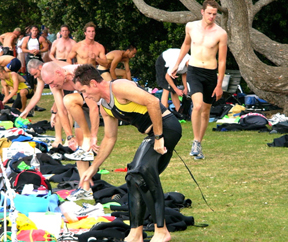 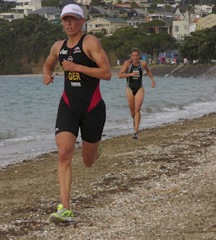 This event in the Structured Finance sponsored Stroke & Stride Series was the 121st Stroke & Stride ever, so what better time to try something new.  Over the years we’ve laid out swim courses in the shape of boxes, triangles, rectangles and have even used a few of the letters in the alphabet.  Race #6 this season would be the first time ever the course was set using a deep-water start.  This course allowed competitors a straight drag parallel to the beach for the 500 metre swim before hanging a left and then the brief final sprint into shore.

Perfect would be the word to describe the weather and conditions on the day with the heat, blue skies and sunshine showcasing the Waitemata Harbour at its absolute sparkling best.  The men’s field had the pleasure of being first away and once they were neatly lined up between the two start buoys the starting horn was sounded.  It was an impressive sight for the spectators lining the beach as the mass of churning white water moved steadily down the bay with the ubiquitous Rangitoto Island as a back drop.  A 500 metre swim can never do much to separate the fastest athletes and at swim’s end it was James Elvery leading in a time of 6min 30 sec however the chasing pack followed hot on his heals including the heavy-hitters; Clark Ellice 6min 32 sec, Daniel Lee 6min 33sec, Sam Walker 6min 44sec, Steve Nicholls 6min 45sec, Andrew MacKay 6min 48sec and Liam Scopes 7min 03sec.

Ten minutes after the men got underway it was the women’s field waiting at the start for their chance to power down the beach into the bright sunshine.  Half a kilometre later the leading contenders again concertinaed together at the swim exit with Debbie Tanner leading them in recording 7 minutes flat for the swim.  Samantha Warriner wasn’t giving anything away only one second back and on her shoulder she had Anja Dittmer for company.  Carmel Hanly was 10 seconds in arrears while reigning Series Champion Nicole Cope faced a 30 second deficit heading out onto the run.

The last time we raced over this distance was in the opening round of the season back in November when Clark Ellice blew the men’s field apart with an awesome display of power and speed.  As it worked for him on one occasion he may as well try it again so on the back of his rock solid swim he promptly ran himself into a comfortable lead which once more proved insurmountable for his talented opposition giving him a second victory for the season.  James Elvery may not have been able to match this red-hot pace however he certainly wasn’t going to let anyone else get close to him as he grabbed 2nd place equalling his best result of the summer.  Hong Kong’s Daniel Lee turned a few heads two weeks back when he debuted in the Stroke & Stride with a fine third placing.  A repeat podium finish today shows that wasn’t beginner’s luck and cements him as one of the leading SWIMRUN athletes currently in the country.  Sam Walker and Liam Scopes continued their own see-saw battle for the minor placings and valuable points with this time Sam Walker scoring the prized fourth position.

Last fortnight the door was opened and we had a first time winner at Stroke & Stride and that’s the first time we’ve had one of those in quite a few years.  That race also saw German visitor, Anja Dittmer shake off the snow and blow off her jetlag with an admirable third place finish.  Trouble is when you have a track record like Anja Dittmer, third place might not be quite good enough as you covet that top podium position.  With the short swim distance hardly making an impact, this race is really just a foot race with a wet start.  The leading two coming out of the water, Debbie Tanner and Samantha Warriner had both scored wins already this summer.  However out on the 5 kilometre run to Mission Bay it was Anja Dittmer making all the moves as she accelerated to the front of the field.  Here’s one for the statisticians; the last season that saw back-to-back first-time winners was way back in 1993/1994.  Time to update the record books because Anja Dittmer is unstoppable in this Stroke & Stride event as she runs through for a splendid victory over the top ranked SWIMRUN contenders in New Zealand giving Germany their first Stroke & Stride victory.  Second place and those all important points go to Samantha Warriner while Nicole Cope’s blazing run gets her up for third heading home Debbie Tanner and Carmel Hanly.

The Series Grand Prix decides who will be this season’s Stroke & Stride Champions.  Over the years we’ve been enthralled by close fought battles that quite often aren’t decided until the final race.  This season’s last event is Race #8 on March 9th and good luck trying to pick a result before that race is in the books.  Habitual Series Champion Brent Foster presently holds second place on 80 points however he’s giving away an 11 point lead to the flying Clark Ellice who has been on fire all summer long.  Then you have the trio of Sam Walker, James Elvery and Liam Scopes wrestling for the sought-after third place and separated by just 3 points after six events.  If the men’s field resembles a minefield then what are we going to call the current women’s standings?   Today’s result lifts past Series Champion Samantha Warriner into the lead with 87 points ahead of another past Series Champion Debbie Tanner on 78 points who is now one point in front of current Series Champion Nicole Cope.  Pressuring this stellar trio is the ever-consistent Carmel Hanly on 65 points.  The excitement doesn’t stop now as the Grand Prix is decided on points from Race #8 plus an athlete’s best five other results.  Consequently we recommend you watch this space as the heat continues to rise with the Series approaching boiling point.