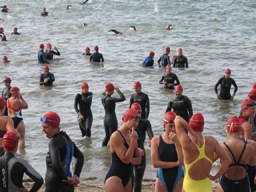 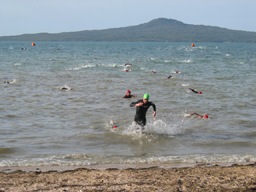 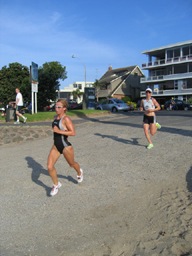 Hot summer in the city of Auckland spells the return of hot racing down at the beach for the fifth event in the Structured Finance Stroke & Stride Series.  When the thermometers and barometers are maxing out what could be better than a refreshing dip in the Waitemata Harbour at gorgeous St Heliers Bay?  If you happened to choose this mid-week afternoon for your after work cool down then you’d find yourself in the midst of the blazing competition doing battle out around the buoys before scorching up the pavement.  This spectacular weather was only fitting, as today’s event was witness to one of those rare moments in sport.  We’re talking about an athlete stepping up to prise open the closely guarded door to be admitted to the Stroke & Stride winner’s club for the first time.  It has been a few years now since the women have allowed anyone new to enter their sanctum.

The light onshore breeze blowing wasn’t doing much to cool the afternoon however it did rough up the swim course especially leg number one which was 350 metres taking on that wind and resultant chop head on.  The women were the first to start as they battered and bumped their way out to the first can before they could enjoy the ride back to shore with their wind at their backs.  First to hit the beach was our winner from last fortnight, Debbie Tanner recording 10min 39sec holding a 3 second lead over German superstar Anja Dittmer.  Lurking just another 3 seconds back was the talented Nicky Samuels and this trio had opened up a more than handy lead over the 750 metre swim course.  Looking to catch these frontrunners were Sarah Pattison 11m 10s, Samantha Warriner 11m 14s, Anna Elvery 11m 16s, Carmel Hanly 11m 18s, Vanessa Palmer 11m 24s, Marisa Carter 11m 28s with Nicole Cope recording 11m 39s.

Two weeks before, newcomer to the Series Nicky Samuels trailed home the accomplished Debbie Tanner by just 4 seconds after the 1000 metre swim and 3 kilometre run.  This time out with the experience of just one Stroke & Stride under her belt Nicky Samuels was making no mistakes and soon took the lead out on the 4 kilometre run course which wound its way to Mission Bay and return.  After her stunning debut at Race #4, Nicky Samuels this week takes it to another level.  On the back of her super quick swim she then runs better than anyone to give herself a resounding victory over the classy opposition.  Debbie Tanner’s great season continues to prosper with a valuable second place after making the early running.  Anja Dittmer may be a novice when it comes to Stroke & Stride however this talented athlete has a wealth of international experience and will be pleased to make the podium with her first outing this season.  Carmel Hanly couldn’t catch the flying trio out front yet was still good enough to hold on to fourth place ahead of the fleet-footed, fast-finishing defending Series Champion, Nicole Cope.

While the women were out on the run it was the men who were taking it on the nose as they headed to that first swim buoy.  As far as Brent Foster is concerned, what is an annoying chop to some is just about made to order conditions for him.  He again manages to ease himself clear of his pursuers opening up a gap at the half way point which he extends to an even half a minute by swim’s end, hitting the sand in a time of 9min 11sec.  Ben Riley 9m 44s is the closest at this stage followed up the beach by Matthew Burbury-King 9m 51s, Jared Jackson 9m 52s, Dean Foster 9m 53s, Daniel Lee 9m 54s, Clark Ellice 10m 03s, Sam Walker 10m 06s, Tom Hahn 10m 10s, Andrew Mackay 10m 17s and Liam Scopes 10m 34s.  For the past four events we’ve witnessed Brent Foster grab an early lead during the swim which he then consolidates during the run on his way to victory while Clark Ellice runs better than anyone, still can’t catch the Fozzie and takes the runner-up position. For Race #5 the script hasn’t changed one iota as deja vu rules once more and our dynamic duo again take out the top spots.  More interesting just a few seconds back is the Hong Kong Olympian Daniel Lee making his first appearance at the Stroke & Stride as he demonstrates an excellent run to back up his stellar swim and grabs a well earned third place finishing in front of experienced campaigners Sam Walker and Tom Hahn.

Now into the second half of the season the competition in the Series Grand Prix to decide the Stroke & Stride Champions is approaching boiling point.  Clark Ellice and defending Champion Brent Foster are having a dingdong scrap at the head of the men’s field with Clark Ellice’s early lead being inexorably eroded by the remorseless Brent Foster race after race.  The burning question now is which of these two will have the final points necessary to take the trophy home in three races time.  Slightly further back you can throw a small handkerchief over the 3 points currently separating Liam Scopes, Sam Walker and Tom Hahn as they all vie for the treasured third position on the end-of-season podium.  Defending Champion Nicole Cope has used today’s result to extend her lead slightly though the pundits are saying this season’s Championship is still too close to call between Nicole Cope, Samantha Warriner and Debbie Tanner.  All three of them have the experience of having ‘been there, done that’ with each already having a Series title to their name.  Therefore each knows only to well the importance of consistency right through the long months of summer until that final race in March.