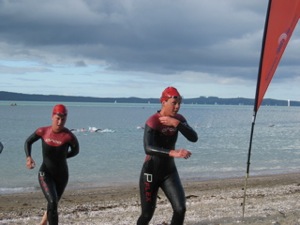 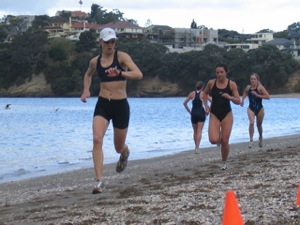 The weather being dished up to Auckland in early summer has been condemned as less than satisfactory by many while those with long memories can recall early season events in previous years coping a real pounding from the elements.  So it is a huge surprise that for each of the three events in this season’s Stroke & Stride Series there has been a window of very nice weather on each date.  Race #3 in the Structured Finance sponsored Series greeted competitors with cool dry conditions and a gentle off-shore breeze with perhaps the only negative being a water temperature that felt as if it had dropped a degree or two in the past fortnight, though that is nothing a layer of Orca neoprene can’t remedy.

This event called for the big 1000 metre swim that was stretched out over the big triangular course and with nothing more than a slight ripple to disturb the water’s surface.  These calm conditions are amenable to most with the exception of those looking to gain an early advantage as it makes it even more difficult to break free of the pack.  As the women neared the end of their swim a small blanket could have been thrown over the leading bunch of four as they traded strokes and elbows rounding the final buoy and their final few metres to the shore before touching the sand.  There was nothing in it with Kirsty Whiting claiming a time of 13 minutes 10 seconds and Debbie Tanner, Samantha Warriner and Rebecca Spence all on her heels running up the steps into transition.  A little further back Vanessa Palmer recorded 13min 32sec, Marisa Carter 13min 46sec and Nicole Cope 14min 05sec.

As the women’s field streamed into transition the men were well on their way out to the first buoy and on rounding this buoy it was evident that one guy was still strong enough to break free of the pursuers. This lead had built to half a minute as he took the final turn into the beach and no prizes for those who guessed it was dominant player Brent Foster churning up the water out in front.  Brent Foster records a smoking 11min 12 sec for the kilometre as he runs up the beach with a whole half a minute in hand over the chasers lead by Matthew Burbury-King and Ben Riley.  Other notables included Clark Ellice 12min 05sec, Will Green 12min 12sec, James Elvery 12min 13sec and Liam Scopes 12min 14sec.

Samantha Warriner had scored two from two this season and if she wanted to make it a treble she would need to dispense with the select group that finished the swim with her.  For this race the run is just a quick three kilometres only as far as Kohimarama and return which sort of rules out any elaborate tactics or carefully formulated race plans.  If you want to deal to your opposition you just jam the accelerator to the floor, pin your ears back and run as fast as you can.  This season Samantha Warriner seems to have found the ability to do this better than anyone and only 500 metres into the run she’d blown past the others and set herself up for win number three.  Debbie Tanner has more experience in these Stroke & Stride races than just about anyone and now also displays the maturity to get better with each race as the Series progresses.  This time she was locked in a duel with Kirsty Whiting throughout the swim and all save for the last few hundred metres of the run where she was able to finally surge clear and claim a fine second place.  Kirsty Whiting is turning in one consistent performance after another this summer and adds another third placing to her season tally.  Hunting these leaders down was defending champion Nicole Cope who once again got into the money snaring fourth spot just ahead of Rebecca Spence.

What does it take to catch Brent Foster after a blistering 1000 metre swim with only 3 kilometres in front of him and a handy 30 seconds lead?  We’ve never yet found the answer to that question and this week the answer eludes us once again as Fozzie hammers it out to the turnaround cone which then sets the defending Series Champion up for his second win of this series.  Showing a great turn of speed and admirable consistency this season is positioning Clark Ellice for his best Stroke & Stride Series result ever.  Race #3 saw him nail another second place and extends his lead to 19 points in the overall Series Grand Prix.  James Elvery turned the tables on Liam Scopes from Race #2, this time edging him out for their treasured third place with Sam Walker next to finish in fifth.

So while Clark Ellice sits atop the Series Grand Prix for the men it is Samantha Warriner who has opened up a 13 point lead over Nicole Cope on the women’s side of the table.  As we go into our five week break before the next event it should be noted how the same top athletes are turning up each fortnight recording one strong performance after another and preventing any pretenders from securing some of those valuable points.  However there are still five races to be swum and run so watch this space when we return in the New Year.