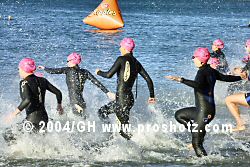 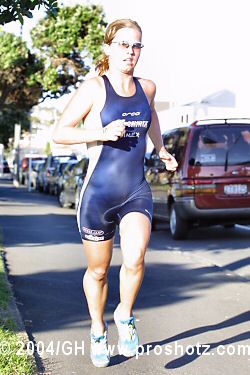 The all-important final and deciding race in the Reesby & Company Stroke & Stride Series garnered even more importance with the event awarded New Zealand Swimrun Championship status for 2004.  Points from this event were imperative for athletes in the Series Grand Prix and the added injection of prize money made this the richest Stroke & Stride ever.  After a wet start to the day, Auckland City came to the party with a dry and still late afternoon allowing for fast racing conditions for the picturesque swim at St Heliers Bay and then the out and back run around the waterfront to the next bay at Kohimarama.

All season long it has been Rebecca Nesbit who has shone in the swim leg of these events and it was no different over this 1000 metre swim triangle as she lead the field once again touching the sand in 13min 5sec.  Debbie Tanner has upped her game in the later part of the season and she was only five seconds in arrears going into transition ahead of notable names including Kirsty Whiting 13min 18sec, Samantha Warriner 13min 21sec, Sophie Hewitt 13min 47sec, Carmel Hanly 13min 55sec, Vanessa Palmer 14min flat, Brooke Dobbs 14min 1sec, Rebecca Spence 14min 12sec, Nicole Cope 14min 17sec, Jacqui Seebold 14min 20sec and Nikki Wallwork 14min 24sec.

Everyone had a lot riding on this event though perhaps the athlete with the most to win or lose was local legend Brent Foster.  Sure, he’d love to win the New Zealand Swimrun Championship for a record 7th time and he’d really love to win the Stroke & Stride Series title for an unprecedented 11th time.   However, most of all he wanted to win one more Stroke & Stride race before the end of the season so he could take his all-time tally of wins from the current 49 up to the magical number 50.  To do this he’d need to defeat a field that included James Elvery, who’d won the last two events and Dean Foster, the reigning New Zealand Swimrun Champion.  It was at the half way mark of the swim that Brent Foster made his move as he upped his tempo, accelerating away from the chasing pack and opening up a 38 second lead by swim’s end, recording 11min 46sec for the kilometre.  It was his brother Dean Foster doing his best to stay close and limit the damage as he lead in a strung out pack that included Kurt Bassett 12min 25sec, Robbie Baff 12m 26sec, Thomas Hahn 12min 37sec, James Elvery 12min 38sec, Carl Cairns 12min 43sec, Sam Walker 12min 52sec, Liam Scopes 12min 53sec and Malcolm McGregor 12min 54sec.

Out on the run course the women’s field was repeating the tactics from a fortnight earlier with Debbie Tanner taking the early lead before being caught by Samantha Warriner on the return from Kohimarama.  Tracking these two was the 2000 Swimrun Champion Kirsty Whiting, 2003 Champion Nicole Cope and a hard charging Carmel Hanly.  Last season’s Stroke & Stride champion Samantha Warriner has won just about everything else going over the past 12 months so it proved appropriate that in the final run up the beach to the finish it was indeed Samantha Warriner adding the New Zealand Swimrun Championship to her trophy collection followed just eight seconds back by a gallant Debbie Tanner and then a gap of more than a minute back to Kirsty Whiting in third.  Carmel Hanly earned herself the fourth spot in this star-studded field ahead of fleet-footed Nicole Cope.

The run leg of a Stroke & Stride is not a place to relax and that has never been Brent Foster’s formula for success anyway as he threw himself into the 4000 metres with no intention of giving any of his competition a sniff of the lead.  In the end he’d maintained his 38 second lead and convincingly won that historic 50th Stroke & Stride.  Second place went to James Elvery and while he couldn’t match Brent Foster today he has proven himself an accomplished athlete stepping up the season with a string of top placings.  Liam Scopes again provided the fastest run of the day which got him up into third, Sam Walker capped his terrific season with a fourth place, just pipping Thomas Hahn by two seconds on the line.

The Series Grand Prix awards points at each of the events and decides which competitor receives the Stroke & Stride Cup and the title of Series Champion.  For the 11th season the Stroke & Stride was again the Brent Foster show as this incomparable athlete once more dominated the Series winning the first race, the last race and three races in-between.  James Elvery (3rd, 2nd, 1st, 1st & 2nd) was the only opponent to rival Fozzie’s supremacy and his victory in Race #7 was a long awaited moment to savour for this flourishing swimrun athlete.  Coming through in third place was the experienced Liam Scopes (4th, 10th, 10th, 3rd, 3rd & 3rd) having his best season ever.  As our younger athletes from previous seasons mature, there’s a new crop of young guys stepping up to challenge and leading the charge this year is Thomas Hahn (7th, 8th, 3rd, 9th, 4th & 5th) who ended the season just two points up on Sam Walker (5th, 3rd, 7th, 4th & 5th).

It’ has been well established over the years that to finish the season crowned Stroke & Stride Champion takes a combination of talent and durability over the entire summer season.  Perhaps we now need to add the adjective perseverance to the success recipe as our Series Champion in 2004 Nicole Cope (1st, 1st, 2nd, 1st, 3rd & 5th) has been carefully honing her skills at the swimrun game over the previous 6 seasons and has finally climbed into the top spot.  Like the men, the women’s field has a new breed of young athletes throwing down the gauntlet, ready to challenge for a win at every race.  Teenage sensation Rebecca Spence (3rd, 4th, 3rd, 4th, 2nd & 6th) proved a class act all season long as she finished her amazing season in a splendid 2nd overall.  Defending her title from last season Samantha Warriner (1st, 1st, 1st & 1st) was the dominant force each time she raced except she ran out of season before accumulating enough points to successfully defend her title.  Consistently high placings through the season saw Carmel Hanly (2nd, 3rd, 5th, 4th & 4th) record her best ever finish in 4th overall, ten points ahead of Nikki Wallwork (4th, 5th, 8th, 5th, 9th & 7th) another big improver from last season jumping two places up in the Grand Prix.