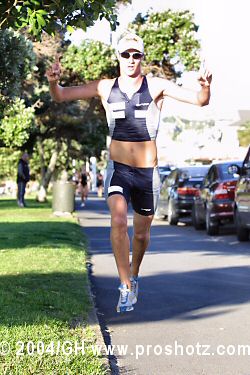 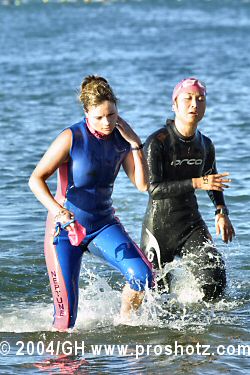 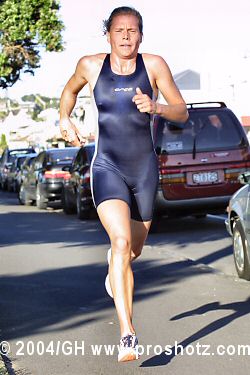 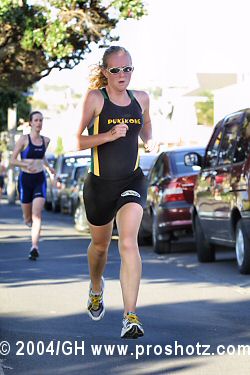 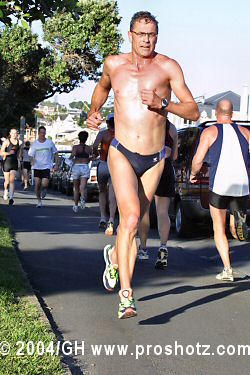 Competitors in the penultimate race of this season’s Reesby & Company Stroke & Stride Series want to now be at their best as time has run out if you’re looking to improve through the Series. Right now is the time to put it on the line and seize your best results and those all-important points. Clear blue skies and bright sunshine greeted competitors at the St Heliers Bay race venue. Also spending the afternoon in Auckland was a howling southerly wind. The only good thing about this wind was that coming from this direction it is blowing directly offshore towards iconic Rangitoto Island, allowing a 750 metre swim to be set without taking swimmers into the full wrath of the wind swept seas further out in the ‘sparkling’ Waitemata Harbour. With a wind of that strength blowing through, it is more important than ever to follow a direct route out and around the cans as a slight deviation from the rhumb line can quickly add up to precious time lost. The best in the business is once again Rebecca Nesbitt as she leads the women’s field and touches the sand in 9min 49 sec followed in by Debbie Tanner in a tick over 10 minutes. Kirsty Whiting records 10min 8sec, Samantha Warriner discards her goggles in 10min 12sec and then comes the usual contenders including Vanessa Palmer, Carmel Hanly, Nicole Cope and Rebecca Spence; all close enough to mix it up out on the run.

James Elvery was raring to go after his first ever win in Race #7 and was off like a rocket at the sound of the gun though he still couldn’t withstand the outright power and speed of Brent Foster through the water as Fozzie once again left the field in his wake out and around the swim buoys. Brent Foster got back to shore in 8min 26sec holding a 25 second lead over James Elvery and Robbie Baff. Clocking 9 minutes and change came the start of a seemingly endless procession of men exiting the water, running up the sand and into transition.

Samantha Warriner has been the Stroke & Stride Series Champion for the past two seasons by following her tried and tested formula. First, take a solid swim that keeps you in touch with the leaders before unleashing a tremendous run split which lifts you into first place and victory. However Debbie Tanner was Series Champion back in 1997 and now in 2004 when she took the lead on the outward journey through to Mission Bay she wasn’t going to surrender it without a fight. Beneath the Pohutakawa lined waterfront on the return, Samantha Warriner was finally able to catch the flying Debbie Tanner and slowly drew ahead over the final kilometre to record her third win of the season. Coming home in a fine second place Debbie Tanner looked to be having her best race in a long time relegating our current Series leader, Nicole Cope into third for this event. Carmel Hanly got up to overtake Kirsty Whiting on the run leg as they recorded fourth and fifth.

Brent Foster hasn’t been beaten this season and set off on the 5 kilometre run with a 150 metre lead over James Elvery who has been attempting to surpass the resident Stroke & Stride legend for more seasons and races than he cares to remember. Would taking the win a fortnight ago have elevated him to a new level where he can now spar with his nemesis out on the run? James Elvery attacked the run course exactly as he had done the start of the swim and out on the road he was finally able to catch Brent Foster and ultimately overtake him and go on to record his second victory of the season. Victory at Stroke & Stride is always sweet but is made all the more sweeter when you have an opponent the quality of Brent Foster trailing you home. If you thought that the action ended there you’d be wrong because following on to his 9min 42sec swim, Liam Scopes unleashed the fastest run of the day to race through into third place. Sam Walker continues with his great form this season to again finish in the money grabbing fourth place ahead of Ben Pulham.

The business end of the season witnesses some close fought competition in the Series Grand Prix going into the must-do final race. Nicole Cope (1st, 1st, 2nd, 1st & 3rd) is looking hard to beat on 92 points as she get closer to perhaps her first ever and long sought after Series title. Her closest challenger on 73 points is Rebecca Spence (3rd, 4th, 3rd, 4th & 2nd) who is having an awesome season up against a host of experienced campaigners. She hasn’t raced too often this season, however when she has Samantha Warriner hasn’t put a foot wrong and is now in third overall with 60 points. Currently in the money and needing just one more strong showing to secure the cash are Carmel Hanly (2nd, 3rd, 5th & 4th), Vanessa Palmer (6th, 6th, 6th, 4th & 8th), Nikki Wallwork (4th, 5th, 8th, 5th & 7th), Kirsty Whiting (2nd, 3rd & 5th) and Brooke Dobbs (10th, 8th, 10th, 6th & 10th).

Sitting atop the men’s Grand Prix is the unassailable Brent Foster (1st, 1st, 1st, 1st & 2nd) who appears well on his way to title number eleven, that’s correct, eleven times Series Champion as he has lead from the front throughout the nineties and now the noughties. James Elvery (3rd, 2nd, 1st & 1st) could well be the heir apparent with his progression through the current season and another to have found sparkling form in the later part of the season is Liam Scopes (4th, 10th, 10th, 3rd & 3rd). Thomas Hahn (7th, 8th, 3rd, 9th & 4th), Sam Walker (5th, 3rd, 7th & 4th), Paul Amey (6th, 2nd & 4th), Ben Pulham (5th, 13th, 6th & 5th) and Terenzo Bozzone (2nd & 2nd) presently are in the top 8 but can’t relax going into the Series finale if they wish to claim their prize ahead of the ferocious competition.