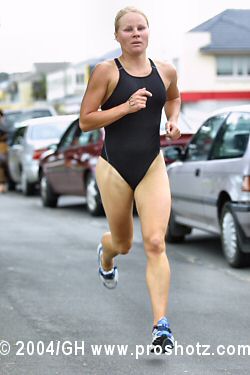 The strong westerly wind gusting down the Waitemata Harbour didn’t deter the hundreds of keen competitors that fronted up for Race #6 in the Reesby & Company Stroke & Stride Series. The swim was mostly sheltered other than between the cans out the back where a nasty chop had blown up. At least the wind and sea state was helping push everyone in the direction they basically wanted to go. The swim distance for this event is only 500 metre and a swim of this short duration can’t do much to spread out a field although it still proved enough for super-swimmer Rebecca Nesbitt to open up a 20 second lead on the rest by the time she ran up the beach in 6min 33sec. Kirsty Whiting then lead in a large number of chasers including the hot athletes of this season: Rebecca Spence recording 7min 16sec, Vanessa Palmer 7min 24sec, Nikki Wallwork 7min 27sec and Nicole Cope 7min 28sec.

Winning a Stroke & Stride is never easy; winning your first Stroke & Stride can be nigh on impossible as previous winners of this event like to keep their little club as exclusive as possible. The Stroke & Stride Series is now in it’s 15th season and has clocked up 112 events however over all this time there has only been 26 different men actually win one of these things. On the occasion of event #113 the champions had dropped their guard as not one of the 26 were on the beach for the start. At the end of 500 metre of swimming two guys were side-by-side and going stroke for stroke as they neared the beach and it was Robbie Baff and James Elvery the first to touch the sand recording 6min and 3sec. Again there wasn’t to be much separation and the chasing bunch just five seconds in arrears was led in by Oliver Tompkins and featured Bryan Rhodes, Dean Foster, Carl Cairns, Ben Logan, Scott Larsen, Thomas Hahn and Ben Pulham. Liam Scopes was also close enough to threaten recording 6min 40sec.

The aforementioned westerly wind was really making a complete nuisance of itself on the outward leg of the 5 kilometre run to Mission Bay, as this was predominantly right into the teeth of the breeze. After rounding the turnaround cone and if you had anything left you could stretch it out on the return to St Heliers with the wind at your back. Early on in the run it was two-time New Zealand SWIMRUN Champion Kirsty Whiting making all the running before she succumbed to the superior leg speed of Nicole Cope and Rebecca Spence. Nicole Cope has a habit of recording the fastest run splits at these events and this season she’s also making a habit of winning, clocking for her third victory. Continuing to get better with every race is Rebecca Spence and this time she scored her best ever finish with a fine second placing followed home by Kirsty Whiting. Vanessa Palmer and Nikki Wallwork had each other in sight the whole race and by the finish it was Vanessa Palmer who snared the fourth spot just 10 seconds ahead of Nikki Wallwork in fifth.

James Elvery has spent a number of summers honing his SWIMRUN skills, continually improving, getting faster and getting closer to that top podium position. He was using all that experience and maturity early in the race as he shared the lead out of the water and then quickly went to the lead out on the run course. Someone else with a ton of experience having raced and won international events all around the world is Bryan Rhodes and he launched an attack in the early stages of the run to draw level with James Elvery so that as they ran the past transition inside the final kilometre they were shoulder to shoulder. On this occasion James Elvery had no intention of settling for second and with a final surge he opened the vital gap he would hold to the line and record his first ever Stroke & Stride victory. Hard-hitting Bryan Rhodes finished a gallant second while Liam Scopes unleashed the quickest run of the day taking him up into third place. Thomas Hahn’s rock solid season continues finishing in the money again ahead of Ben Logan in fifth.

Brent Foster may have been absent from today’s event however that doesn’t mean he’s relinquishing his grip on the Series Grand Prix and his lead still looks very healthy with just the final two events to run. Winning this race has lifted James Elvery into a tie with Thomas Hahn on 54 points in second place. Also tied up are Liam Scopes and Paul Amey in fourth equal with a 40 point total. Sam Walker, Terenzo Bozzone and Bryan Rhodes are the next in line all currently on track for a share of the Series Prize Money. Nicole Cope has been a long time competitor in the Series and while she has always been the toughest of contestants she is still striving to win the title of overall Series Champion. This could be Nicole’s season as her win today lifts her 4 points ahead of Rebecca Spence and that narrow lead could prove decisive at season’s end. Rebecca Spence has had an amazing season and a clear example of that is the long list of names now trailing her in the Series Grand Prix. Carmel Hanly, Vanessa Palmer and Nikki Wallwork are having a real battle for that third position all tied up on 43 points. Presently in sixth, reigning Series Champion Samantha Warriner is in desperate need of points if she hopes to successfully defend her title this season.