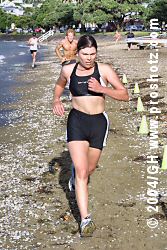 The Auckland weather report forecasted torrential rain, thunderstorms, hail, biting gale force southerly winds and even fine breaks for the first event of 2004.  Competitors in the Reesby & Company Stroke & Stride Series were left wondering just what they should be taking to the beach.  Umbrellas or suntan lotion?  Lycra or polypropylene?  Beach towels or blankets?  As it turned out, all would have been handy by the end of the day.  Actually for the 60 minutes or so that the Stroke & Stride race is in progress we were shined on by one of those aforementioned fine breaks. Furthermore just minutes before the start a torrential rain shower from one of the sinister dark grey clouds patrolling the sky served to completely flatten out any remaining ripples on the water leaving idyllic swimming conditions for the big 1000 metre swim at St Heliers Bay.

Stretching out a lead at the head of the field was Rebecca Nesbitt, which she really opened up on the final leg to touch the sand in 12 minutes 39 seconds.  Defending Series Champion Samantha Warriner was forced to go to the front of the chasing group recording 13min 26sec with a 10 second buffer back to Debbie Tanner and then a strung out pack that included leading names: Vanessa Palmer, Carmel Hanly, Anna Elvery, Rosemary Everitt and Nikki Wallwork.  Swimming together was the winner of our last two events Nicole Cope and current Series leader Rebecca Spence, who both recorded 14min 28sec for the swim and eagerly anticipated the run.

Three kilometres is not a lot of distance to make up any swim deficit nevertheless it was exactly what the doctor ordered for Samantha Warriner allowing her to slip past Rebecca Nesbitt to claim the lead which she extended to nearly a minute by the time she crossed the line for her second victory of the season.  Nicole Cope was turning in the fastest run split of the day lifting her into second equal place with Debbie Tanner for the final couple of hundred metres before she accelerated again to take the runner-up spot.  Debbie Tanner held on for third ahead of Rebecca Spence who had run through the field for the fourth spot passing Carmel Hanly before the line.

Three times this season Brent Foster had raced and three times he’d led from start to finish to record three victories.  Was the New Year going to bring any changes?  It didn’t look like it early on as spectators on the beach observed an early break form the pack as the leading men rounded the first buoy.  This lead was extended further in the remaining two legs and the crowd was proved correct as Brent Foster ran from the water with a 15 second lead clocking 11min 36 sec for the kilometre.  A little surprising to see a newcomer to the Series, Stephen Sheldrake emerge second from the water and not too far behind him was the flying Kurt Bassett only to happy to mix it with his older, larger rivals in the water.  There was then a bit of breathing space before the arrival of Robbie Baff in 12min 18sec, seven seconds ahead of a giant sized pack of chasers with James Elvery, Ben Pattle, Will Green, Clark Ellice, Ben Logan, Sam Walker and Thomas Hahn to the fore.

We’re not sure if Brent Foster felt comfortable with his lead heading out on the run to Kohimarama or even if he is aware of it at all.  Fozzie’s tactic has always been not to look back, just go as fast as you can until you cross the line.  This approach has brought him success in the past three events and when he did indeed go onto win this race it was for the staggering 49th time that Brent Foster crossed the line victorious in the history of Stroke & Stride.  Over the past 12 years he’s left some seriously talented opposition in his wake and in 2004 it was to be James Elvery who got closest courtesy of recording the day’s fastest run split.  Clark Ellice is one of the few others to have snared a win during the past decade and his first start of the season saw him secure the other podium position.  The much travelled and vastly experienced Paul Amey has a fine record of his own with seven victories dating as far back as 1992 and on this occasion he scored a fourth heading home Stephen Sheldrake who ran well to back up his strong showing in the swim.

Race #4 marks the halfway point in the Series and those making a serious challenge for the title of Series Champion now need to have a healthy number of Grand Prix points to their name.  And challenges are coming from everywhere with 70 athletes recording points after only four events.  Nicole Cope is always a formidable competitor however is yet to win the overall title; her strong start to this season gives her the lead although only by a solitary point over Rebecca Spence.  Carmel Hanly seems to have found another gear this summer and holds a three point advantage over our defending champion Samantha Warriner who needs strong finishes in all the remaining events if she is to defend her crown.  If this is the year that someone will challenge legendary Brent Foster for the title that he has made his own, then this someone will need to fire a shot soon.  The unprecedented run speed of the unassuming and approachable Paul Amey holds him in second, just clear of the youngsters of which Thomas Hahn leads the charge, nipping at his heels only one point in arrears.