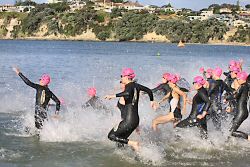 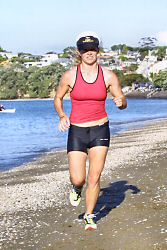 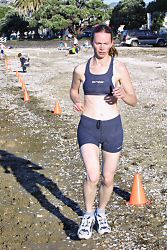 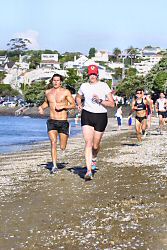 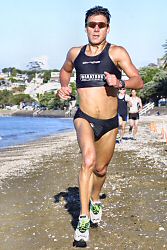 Some things just get better and better. It is with big smiles all round as we report that the weather conditions to date this season are the best in living memory. Race #3 in the Reesby & Company Stroke & Stride was an absolute pearler with bright sunshine, warm temperatures and hardly a breath of wind leaving the sea at St Heliers Bay almost glassy in parts. These perfect conditions all combine to make it fast and furious out on the race track for competitors trying to score the healthy prize purse on offer and nail down some more of those all important Grand Prix points.

On the beach awaiting the start, competitors were anxious to get underway, if only to enjoy a refreshing dip in the Waitemata Harbour on this glorious summer’s day. Out in front of the women’s field those peerless swimmers, Rebecca Linton and Rebecca Nesbitt were soon doing what they do best, namely swimming away from their competition over the big 1000m triangular course. It was Rebecca Linton who really poured on the pace in the latter stages opening up a 20 second lead on Rebecca Nesbitt, hitting the shore in 12min 54sec. Strung out behind these two were a number of contenders including Anna Elvery, Amy Brookes, Rosemary Everitt, Nicole Cope and Rebecca Spence all in touch heading out onto the run.

While the women’s field were approaching the end of their swim, the start for the men’s field sounded their action-packed departure with the brief charge down the sand, plunging headfirst into the tide and a multifarious flailing of limbs splashing out towards the can in front of Rangitoto Island. These guys weren’t hanging about either; with the first buoy 400 metres off the beach and the first swimmer rounding it in a tick over 4 minutes. Pundits were of course calling this lead swimmer as Brent Foster early on and as he powered up the final leg parallel to the beach his mighty stroke was there for all to see, he was back on dry land in less than 12 minutes. This time gave him a substantial lead and comfortable 30 second cushion over the next best swimmers, Robbie Baff and Paul Amey. Following close behind then came Kurt Bassett, Aidan Crouch, Jared Jackson and Malcolm McGregor with Thomas Hahn recording 13 minutes flat.

Back out under the pohutukawa blossoms on the run to Kohimarama, the women’s field was still being lead by Rebecca Linton enjoying her first start of the season and a 60 second advantage. However, the big mover on the course was again looking to be Nicole Cope who had run through the field to take victory at race #2 a fortnight earlier. Three kilometres in not a whole lot of distance to make inroads; when you have the leg speed of Nicole Cope allied with her current sparkling form it can prove overwhelming. For the second race in succession Nicole Cope was triumphant passing a gallant Rebecca Linton within a kilometre of the finish. Young Rebecca Spence continues her rock-solid season with yet another podium finish in third place heading home Anna Elvery who was recording her best result for the summer.

Brent Foster’s commitment to win the Stroke & Stride continues to astound and just as amazing is his performances in the opening three rounds of the current season. After his dominating swim leg he went on to win his third race in exactly the same manner as before. That is; leading from start to finish, a wire-to-wire victory. From the starting horn he has again and again shown the ability to jump clear of the competition and then purely time trial to the finish with only the clock for company. Someone who did carve some time out of Fozzie’s lead was the fleet-of-foot Paul Amey in second place. He last won at Stroke & Stride three years ago but will now have to wait to the new year to add to his list of victories. The young Thomas Hahn was having a tremendous race amongst his elder adversaries overhauling Malcolm McGregor on the run to snare a fine third place. Malcolm McGregor was still all smiles at the line with his first podium finish of the season and a pocket full of valuable Grand Prix points.

The Series Championship hasn’t been won by Brent Foster just yet; we still have five of the eight events to complete. However with three from three you could say he already has one hand on the Stroke & Stride Cup. It will be an enthralling contest if someone can get up to challenge him in the back half of the season. It is the teenagers Terenzo Bozzone and Thomas Hahn looking best placed to cause an upset with only two points separating their scores at this point.

The women’s field is presently being lead by that other teenage sensation Rebecca Spence. She has the vastly experienced Nicole Cope just three points in arrears and a host of others lined up further back. It’s looking like one of the hardest fought seasons ever lies ahead as we count down to the final event in March.